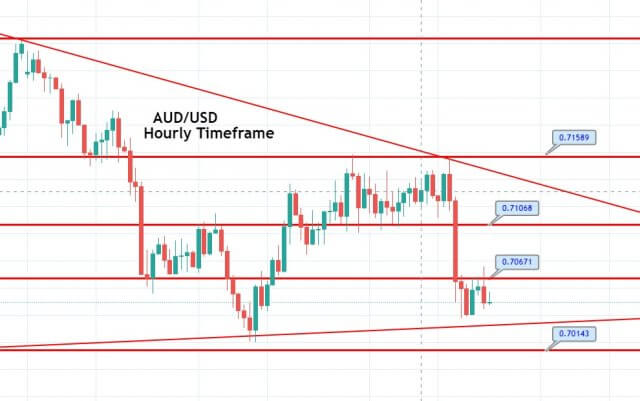 During Thursday’s early Asian trading hours, the AUD/USD currency pair failed to stop its overnight bearish moves and hit the intra-day low around well below 0.7050 level despite the hotter-than-expected Australian consumer inflation figures, which showed that Australia’s headline CPI increased 1.6% QoQ during the 3rd-quarter as against a 1.9% contraction in the previous quarter.

However, the bearish sentiment around the currency pair could be associated with the prevalent risk-off market sentiment, triggered by the worsening coronavirus (COVID-19) conditions in Europe and the UK, which exerted some additional pressure on the perceived riskier Aussie and dragged the currency pair below 0.7050 marks. The lack of progress in stimulus talks in the US adds a burden around the market trading sentiment.

Across the pond, the increasing probabilities of an interest rate cut by the Reserve Bank of Australia in November also played its major role in undermining the Australian dollar. On the other hand, the broad-based US dollar fresh strength, backed by the risk-on market mood, turned out to be one of the key factors that kept the currency pair under pressure. At the moment, the AUD/USD currency pair is currently trading at 0.7044 and consolidating in the range between 0.7038 – 0.7157.

The market trading sentiment failed to stop its previous day bearish moves and remains depressed during the early Asian session as the condition of the second wave of coronavirus infections in Europe and the UK getting worse time by time, which suggests that the local lockdowns are not able to tame the pandemic, which in turn suggests fresh national activity restrictions. Apart from this, the prevalent fears of a no-deal Brexit and the long-lasting inability to pass the US fiscal package also weighed on the risk sentiment, which eventually undermined the perceived riskier Australian dollar and contributed to the currency pair gains.

The reason for the market risk-off mood could also be associated with the on-going U-China tussle as the renewed concerns over worsening diplomatic tensions between the world’s two largest economies keeps exerted downside pressure on the market trading, which keeps the AUD/USD currency pair under pressure.

This, in turn, the broad-based US dollar succeeded in extending its overnight gains and took some further bid during the early Asian session as investors still prefer the safe-haven assets in the wake of risk-off market sentiment. However, the US dollar gains seem rather unaffected by the intensifying political uncertainty ahead of the upcoming US presidential election on November 3. However, the incoming polls tend to suggest a clear-cut presidential victory for the Democrat candidate Joe Biden, which might cap further upside momentum for the US dollar. However, the US dollar gains become the key factor that kept the currency pair under pressure. The dollar index, which pits the dollar against a bucket of 6-major currencies, stood at 93.472.

On the contrary, the upbeat Australian consumer price index (CPI) inflation data released soon before press time becomes the key factor that helps the currency pair limit its deeper losses. It is worth recalling that Australia’s CPI increased by 1.6% quarter-on-quarter in the 3rd-quarter, surpassing the forecast of 1.5% after the second quarter’s 1.9% contraction. The annualized figure matched the estimate of 0.7%. In the meantime, the Reserve Bank of Australia’s (RBA) trimmed-mean CPI rose 0.4% quarter-on-quarter against expectations for 0.3% and -0.1% previously. The annualized trimmed measure came in at 1.2%. Looking forward, the market traders will keep their eyes on the USD moves amid the lack of major data/events on the day. Furthermore, the risk catalyst like geopolitics and the virus woes, not to forget the Brexit, will also be key to watch for the fresh direction.

The AUD/USD pair faces immediate support at the 0.7014 area, and closing of candles above this mark is anticipated to direct selling bis until the 0.7060, and above this, the next resistance stays at 0.7106 level. The violation of 0.7060 can help us capture quick buy trade in AUD/USD pair. Further on the lower side, the AUD/USD pair may plunge until 0.7014. Let’s look for selling below 0.7129 level today. Good luck!