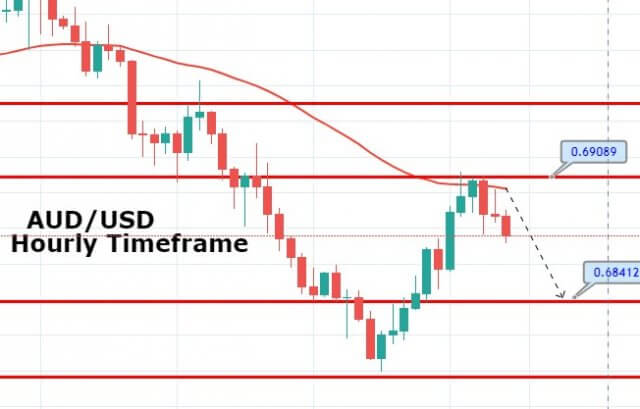 The AUD/USD pair was closed at 0.68540 after a high of 0.70039 and a low of 0.68392. Overall the movement of AUD/USD pair remained bearish throughout the day. The risk perceived Aussie posted losses on Thursday in risk-off market sentiment, which was caused by the gloomy outlook of the US economy by Federal Reserve in its monetary policy meeting. The FED in its report said that the impact of coronavirus could last for a more extended period of time than Fed expected, and recovery would also be slower than expected.

The GDP contraction expectations also increased to 6.5% for this year, along with the unemployment rate expectations towards 9.3%. Risk- appetite disappeared after that announcement from the market, and investors started buying safe-haven currency US dollars. The higher demand for the US dollar exerted pressure on AUD/USD pair, and hence par started to fall on Thursday. On the data front, at 6:00 GMT, the MI Inflation Expectations from Australia were reported as 3.3% in May compared to April’s 3.4%.

On the American front, the jobless claims decreased to 1.542M from 1.550 M of forecast and supported the US dollar. The PPI for May also surged to 0.4% against 0.1% of expectations and added in the strength of the US dollar, which eventually dragged the currency pair AUD/USD on the downward track to post daily losses.

Furthermore, the Australian Prime Minister, Scott Morrison, said that he would not be intimidated by the coercion moves from Beijing. Australia’s export trade to China is huge, with around a third of everything Australia export goes to China. The relationship between China and Australia was disturbed after Morisson called for an international inquiry on the origin of coronavirus, which was first reported in China. In response to what Beijing slapped tariffs on Australian Barley, ad threatens to do more, which ultimately affected Aussie demand in the market.


On the US-China front, the tension remained there with the recent criticism on Federal Reserve’s latest monetary policy decision by China that the massive liquidity stimulus by Fed will increase the debts of the US government and also the world’s debt. In response to this, the US Vice President Mike Pence said that the US would remain tough on a trade deal, which raised fears about a potential trade war between the two biggest economies.

The increased tension between the US & China weighed on Aussie due to its relationship with the second-largest economy. China-Proxy Aussie got some pressure after the increased fears of US-China tussles and moved the pair AUD/USD lower on Thursday.

We are taking a selling trade below a double top resistance area of 0.6900 level; below this, the AUD/USD pair is likely to drop, especially due to bearish engulfing candle, which can be seen in the chart above. The more substantial bearish bias can lead AUD/USD pair lower towards the next support level of 0.6845 level today.