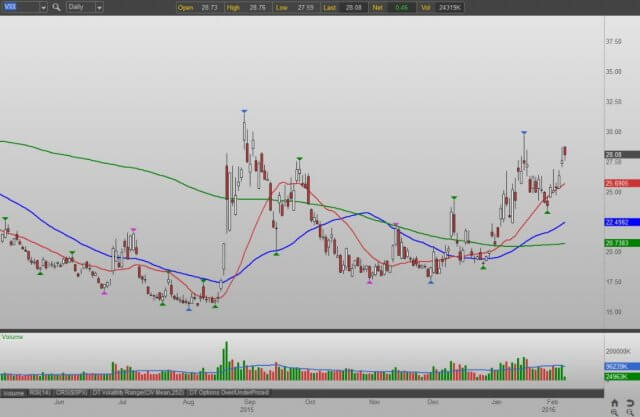 For years we have had many interesting products which have allowed us to operate all kinds of volatility assets, even if they were comparatively young products. Understanding these products well has always required a little study time. On the other hand, improper management of these products could lead to increased risk, so traders should know exactly what they are doing.

So, think and test your strategies beforehand and fake everything you can into a demo account before using real money. The VXX, which we will analyze in this section, is by far the most volatile product with nearly $1 billion of assets under management. It is presented as a structured fund (TNC) and has a total expenditure of 0.89% per year.

The VXX can be marketed as a share and is also the underlying of a number of options. The product has existed since 2009 and since then has generated one of the most impressive charts among any of the financial instruments. As we noted, it is obvious that this product should not be considered in any way as a long-term investment, but as a bargaining and hedging instrument.

The decisive factor is that the VXX is not directly related to VIX, but to VIX futures. In previous articles, we have already presented in detail the fact that the movements of these instruments may deviate from each other in some cases. The configuration of the loss limit also depends on account size and personal risk, as well as money management.

Given the obvious downward trend, the question arises as to why someone wants to go long for a long time. Additionally, it wouldn’t be more affordable for you to cut short a lot of times? The objective of long positions is to benefit from strong increases in volatility, which can multiply the value of the VXX in a very short time.

Since such increases in stock market volatility are accompanied by crashing, we will have effective coverage against price losses. However, this type of coverage becomes quite costly over time, as sufficiently strong volatility increases occur more rarely and the VXX slowly but steadily loses value the rest of the time.

The objective of short positions is the opposite: If there is not a sharp increase in volatility, the VXX decreases in value slowly but steadily, so we accumulate profits if we have a short position.

The problem is this: While the losses are theoretically unlimited in an increase in volatility, as the price can go up to very high, the gains are always below 100%. In addition, the exposure decreases with the fall in prices, so, in absolute terms, we will have less and less profit. Similarly, in the case of making a profit, new short positions would have to be taken in order to keep the initial risk constant. And we haven’t even said that it can be difficult to find a broker who can easily allow us to take short positions in the VXX. Strong increases in volatility can multiply the value of VXX in a very short time.

To do this you must first take a closer look at its construction. The VXX is composed of a combination of VIX futures contracts in different periods, before and after, whose units depend on the maturity of the contracts. This composition changes

daily at the expiration of a small part of the previous month and purchase contracts for the following month. In particular, a separate index is constructed for this purpose (symbol: SPVXSTR), which is mapped to the VXX. It is very important to warn that these changes are made on the basis of a neutral strategic design so that the VXX does not lose value because during a contango situation – in which the lowest value futures are sold and the highest value futures are bought.

The real cause of the long-term price decline is the so-called contango loss. Which describes the predominant deviation of the curve forward to the lowest VIX. Because if these low VIX values persist until the end of the respective front contract, the final settlement will occur at that level. Let’s take an example, consider the following situation of a steep contango:

If VIX remains at a low level until futures expire, the value will be lost continuously. Assuming that the VIX is maintained at 15 % until its maturity in the current month as well as in the future, then the losses will amount to 17 or 25 %. Although the structure of the container is rarely so pronounced, losses accumulate continuously as long as there is no significant increase in the volatility or reversal of the feed curve. Because contango prevails, the VXX will lose its long-term value. Certainly, everything becomes evident at the time we realize that, since 2012, the VXX has received around $6.5 billion, according to the money flow tool of www.ETF.com.

At the same time, we could say that a fortune of just under a billion US dollars is invested in the VXX. This means that around $5.5 billion of assets have been lost in the last 6.5 years. Vance Harwood adds another interesting aspect: If the issuer Barclays Capital were not fully covered, but for example only 90%, it would mean that we would get a good additional income of up to $550 million in addition to the management fee during this period.

VXX is a fascinating product with an unmistakable long-term trend. Despite this, and as is obvious, it is surprisingly difficult and very risky to try to make long-term gains with this product. While the long positions will often fight against the weight of the contango, for the short positions, the sword of Damocles hovers before a rapid and sharp increase of volatility and always on the slow gains that otherwise would be quite regular.