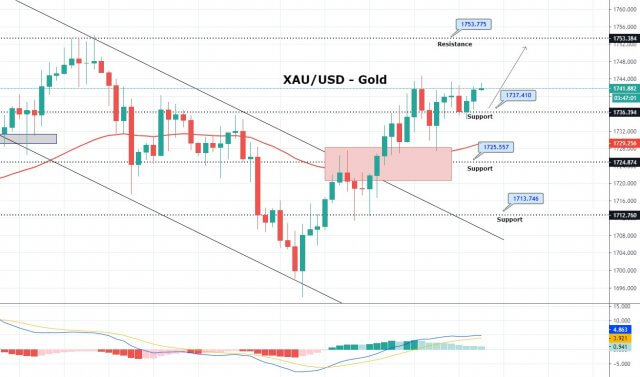 The precious metal gold is trading with a bullish bias around 1,742 area, bouncing off above start support level of 1,736 level on the 4-hour chart. Most of the buying is fundamentally driven as the broad-based U.S. dollar is experiencing a sell-off on the day as investors turned into the safe-haven assets due to the latest retaliation between the U.S. and China.

China stops the purchases of American soybeans and other U.S. agricultural goods. The reason for the weaker U.S. dollar could be attributed to the second wave of coronavirus. Moreover, the gains were further bolstered by the intensifying protest in dozens of U.S. cities over the death of George Floyd, which exerted some bullish impact on the safe-haven U.S. dollar and kept the gold prices under pressure. While

Protesters occupying the area near the White House against the alleged killing of Minnesota’s George Floyd. As in result, U.S. President Donald Trump showed a willingness to use all the possible ways like “military or social” to take the situation under control. The absence of major data/events also contributed to the bullion’s profit-booking moves. Looking forward, due to the light calendar, the traders will keep their eyes on the qualitative catalysts for fresh impulse.


At this point, gold is likely to close three white soldiers ion 4-hour candles, which may lead the gold prices further higher until 1,749 area. On the higher side, gold’s immediate resistance holds at 1,742, and closing of above this level will confirm the bullish signal. On the higher side, we have placed buy trade at 1743.32 with a take profit at 1749.32 along with a stop loss around 1737.32