What is Distributed Ledger Technology, and how is it different from Blockchain?

Blockchain is becoming more and more accepted as a concept in the world of finance nowadays. The idea of blockchain has been explored by a greater audience every day, with even traditional centralized financial institutions are taking an interest in what blockchain can offer.
However, most of the traditional financial institutions have started to use another term alongside blockchain: the distributed ledger technology. Articles, as well as corporate statements, seem to use terms “blockchain” and “distributed ledger technology” interchangeably. This article will try to explain that there is a difference between the two terms as well as what the difference is exactly.

Distributed ledger technology
Distributed ledger technology, or DLT, as some people may call it, is a database of records that aren’t stored or confirmed by a central body. This database is then spread across several nodes. Each node saves an identical copy of the ledger, therefor making it decentralized. Each participant node of the network works independently from one another.

Blockchain ensures cryptographic signing and linking groups of records of transactions in the ledger.

This way, blockchain forms a chain, which is where it got the name from. Depending on the specifics of a certain blockchain, the public is given the opportunity to give their opinions on how it is structured and where it is headed.
Bitcoin can be considered a true example of a blockchain user. It shows how a blockchain should run. Bitcoin is completely open, and anyone can contribute to its code and give their opinion on how to improve it. Meanwhile, distributed ledger technology only has part of it decentralized. The governing portion of the ledger is completely centralized.
Distributed ledger technology and blockchain are not interchangeable
Even though every blockchain is a form of a distributed ledger, not every distributed ledger can be considered blockchain. The two terms cannot be used interchangeably as they represent similar, but not the same things. 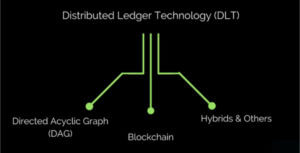 With that said, some organizations, corporations, and institutions may prefer distributed ledger technology over blockchain. The Bank of England is considering distancing themselves from the volatility associated with blockchain by supporting distributed ledger technology. Many corporations also might prefer the idea of a decentralized ledger so they could keep matters in their hands while using the word blockchain to capitalize on the public’s interest.