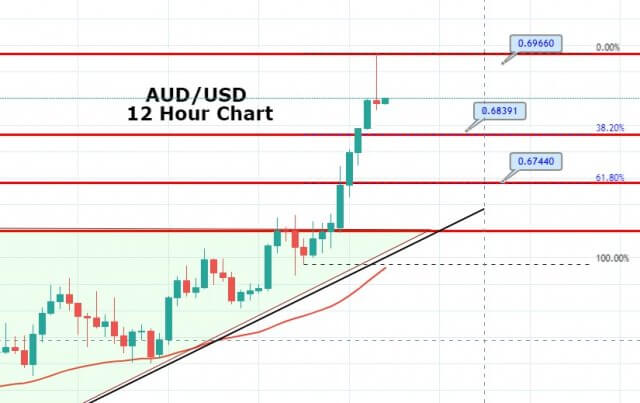 The AUD/USD was closed at 0.68969 after placing a high of 0.68985 and a low of 0.67747. Overall the movement of AUD/USD pair remained bullish throughout the day. The AUD/USD pair extended its previous day’s gains and continued it’s 3 days bullish rally for another day and moved above 0.68900 level on Tuesday on the back of the risk-on market sentiment. The risk-sensitive Aussie gained a lot from the increased risk appetite of the market on Tuesday.

Apart from that, RBA gave an optimistic outlook and stated that the pandemic’s global state was improving. These optimistic comments from the Reserve Bank of Australia also helped Aussie gain traction against the US dollar.

The Bank stated that over the past months, the infection rates were declined in many countries, and the easing of restrictions was also reported from across the globe. If this activity continued, then recovery for the global economy was on its way, which was already supported by large fiscal packages and the significant easing in the monetary policies from central banks.

The Bank stated that the Australian economy was facing its biggest contraction since the 1930s, but there were some signs of encouragement as the rate of new infections was declined, and there are possibilities that the depth of downturn will be less than the expected. Restrictions were also eased, and the working hours were increased, which would lead towards consumer spending and recovery of the economy.

Furthermore, RBA chose not to purchase further bonds and remained at the same level towards bond-buying, which was decided in the last meeting.

Aussie gained traction in the market after positive hopes from RBA, and it was already on the wings due to substantial risk appetite in the market. Combined support from these factors added in the Australian dollar’s daily gains against the US dollar, and the pair AUD/USD rose above 0.6898 level.

Furthermore, on the data front, at 6:30 GM, the Current Account Balance from Australia showed a surplus of 8.4B against the forecasted 6.3B and supported the strength of Aussie. The Company Operating Profits for the quarter were also increased to 1.1% against 0.0% expected and supported Aussie. The US dollar was weak across the board due to risk-on market sentiment after easing lockdowns from across the globe and increased local tensions due to protests added in the gains of AUD/USD pair.


Technically, the AUD/USD prices are in the overbought zone at 0.6900, and soon we can expect bearish bias in the pair. The 50 EMA is left far behind at 0.6580, which clearly signifies that technically the prices should be trading around 0.6580 level. The MACD has also started closing smaller histograms, which are also suggestings that Aussie prices can go after 38.2% Fibonacci support.