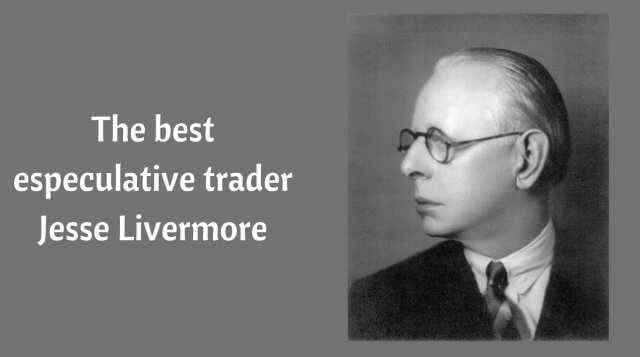 Although I’m a trader of Forex, you have to admit there is likely to be more money to be earned on stocks than on Forex, even though it is only a matter of degree. Absolutely, one of the most successful stock traders in history has been Jesse Livermore. He explained his commercial rules basically in two books, but since there were discrepancies between the two publications, there is much confusion about exactly what his system was. After many studies of his writings, I will summarize in this article the general methods he used and which even today can still be used to get spectacular gains.

First a word of warning: when Livermore was trading on the stock market as a serious professional, it bought and sold its own shares by a margin of 10%. This is very different from most online brokers today that allow trading individual shares. To do this properly and without having to pay too much in fees and commissions, you really need to start with a five-digit sum and one of the highest-ranking brokers.

Here’s what Livermore did:

Step 1 – Determine if the Market is Bullish or Bearish

Livermore explained that he did not begin to become a real professional until he learned to anticipate big moves in the market. One of the advantages of trading shares is that you can use larger business cycles and conditions to predict whether it is more likely to rise or fall in general terms.

When trading on a stock exchange using the Livermore method, it will only go long on a bullish market and short on a bear market.

Livermore indicated that the job of a stockbroker began with the purchase of shares right at the beginning of a bullish market and then had to endure until the bullish market was over, or short start selling stocks right at the beginning of a bear market, and hold out until the bear market was over. He also said that on some occasions a financial market is not very bullish or bearish, which would indicate the time to close existing positions, but not the time to open new ones in the opposite direction.

The moment the trader is ready to start going short or long, he must decide what stocks to buy. Stock indices can be bought, but the gains can be maximized by taking the shares of the next cycle. This is best achieved through a top-down approach that shows industry indices that are published by several financial services companies. Of course, a study of the economic situation in that sector may also be useful. Theoretically, you have the possibility to see the prices of the sectoral indices and see if they also show up as the largest market index, which is an important confirmation that you are looking at the right sector.

Step 3B – Selection of Actions

Livermore negotiated the two most active shares in each selected sector where he wanted to be. Once again, you can use a simple technical method to see which actions are making new highs or lows stronger, in addition to studying companies’ financial data, market share, products, etc. There are two main advantages of being in the two most active values of a sector: firstly, the benefit of diversification, and secondly, Livermore saw that if one of the shares started to behave significantly worse than the other action, This was a clue that indicated that something was probably wrong with that company and when that happened it had to come out of that value.

An important part of trading shares using the Livermore method focuses on the major companies that are at the forefront of the technological changes that are emerging and of the customer requirements. During the first part of his career, Livermore focused heavily on sugar, steel, and railways, which were key components of economic changes during the 19th century. During the current bullish cycle, he would surely be buying Apple shares in the same way he bought sugar when he was developing new technology to make sugar affordable to the masses.

Livermore liked to buy on the rebounds bullies and sell on the breaks under. It also always increased its new positions and not in equal sizes of positions. I can illustrate this with an example.

Think for a moment that you’ve managed to identify the beginning of a bullish market. You are interested in shares A and B within sector C. The A makes a new maximum price, higher than those seen for several weeks or months. Livermore would then buy shares immediately, but with only a quarter of the total amount of shares in that market that it would eventually buy. He then waited to see how the operation would turn out. If I continued to climb strongly and make new highs, I would buy again: half of the remaining three-quarters, and then wait a little longer. If the pattern repeated itself, then he bought the rest of the shares he wanted. He said you could use a 1% increase in price as a signal to add positions, but probably used your own criteria rather than a set percentage.

If at any moment the climb seemed to lose strength, Livermore would leave. As the position gradually increased, he protected himself from more serious losses when he was “wrong” about the momentum of the movement. When he was wrong, he waited patiently until everything seemed right again and tried the operation again.

Livermore did not use a hard stop loss. It simply left the market when it judged that it had made a mistake.

One of Livermore’s most famous dates is “I made more money playing tight than I ever did to be right.” What I meant by that was that no one could foresee every market swing, so go in at first and don’t come out until the whole market has finished its movement. In this way, it is possible to buy a share for 10 dollars and sell two years later at the end of a bullish market for 210 dollars and get big profits. He specifically warned about selling on setbacks for fear that the market was changing and then trying to buy the shares back later. Livermore suffered from this in its early years of trading.

Here is a summary of the method of trading shares of a man who was probably the largest stockbroker of all time. One last word of warning: Livermore went bankrupt several times, and this is mainly due to his poor money management skills. He simply risked too much capital in his positions. Be careful with this in this area and do not follow his example.