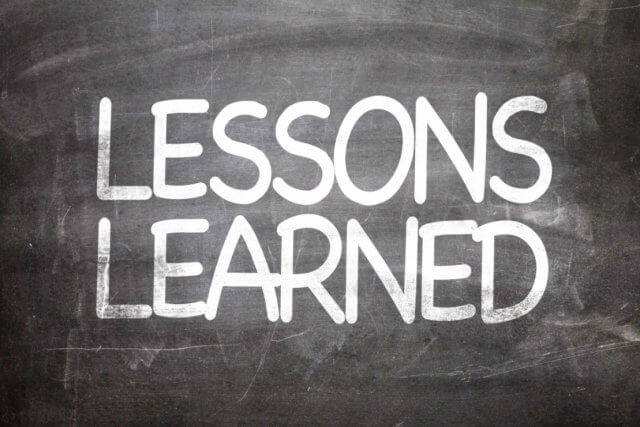 Making the decision to become a forex trader is an empowering one, and while some of us are apprehensive about opening a trading account, others find it exhilarating. After all, if you’ve spent quite a lot of time researching and you feel that you’re totally prepared, then you’re ready to make money. This was how I felt when I opened my first trading account – I had an image in my mind of how it was going to be and how much money I was going to make. The good news is that I did make money, but I learned some lessons in the process.

Lesson #1: Don’t Be too Sure of Yourself

Self-bias is a common problem that affects many traders. We tend to look for information that supports our hypothesis to enter a trade, while ignoring evidence that suggests we shouldn’t. We also might trick ourselves into thinking that a trade is guaranteed to be a winner because we feel overly confident. I made this mistake once and lost way too much money on a trade because it seemed like I just couldn’t lose thanks to the information I was receiving from my indicators. If I had remembered that the market is unpredictable and tightened my stop loss, I could have cut back on those losses.

Lesson #2: Don’t Trade Just Because You Feel Like it

I woke up one morning, had a cup of coffee, and felt like being productive. However, the market just wasn’t showing me any good moves and there wasn’t any evidence that I should enter a trade. After sitting around for a while, I just couldn’t stand it anymore – so I entered a trade to feel like I was doing something. The trade lost money and I learned a valuable lesson in that sometimes it is better to do nothing. If you want to avoid this problem, always ensure that there is supporting evidence to enter a trade based on your trading plan, and don’t trade just to feel the rush.

Lesson #3: Be Careful How Much You Risk

In the beginning, it can be tempting to risk too much money partly because you don’t realize that it’s too much. In reality, you shouldn’t be risking more than 1-2% of your total account balance on each trade, especially in the very beginning when you’re more likely to make mistakes. While I only risked slightly more than I should have, I did learn to tone it done after taking a couple of hits. Remember, being a successful forex trader is as much about managing your risk as it is about winning trades.

Lesson #4: Don’t Open Too Many Trades

On another productive morning, I decided to enter multiple trades at once to increase my chances of making a profit. Unfortunately, I got stressed out rather quickly and had trouble watching over each open position. Some of us may be better at multitasking than others, but you shouldn’t push it in the beginning. It’s better to stick with a couple of positions at a time until you get the hang of it, or for good if you’re easily stressed.