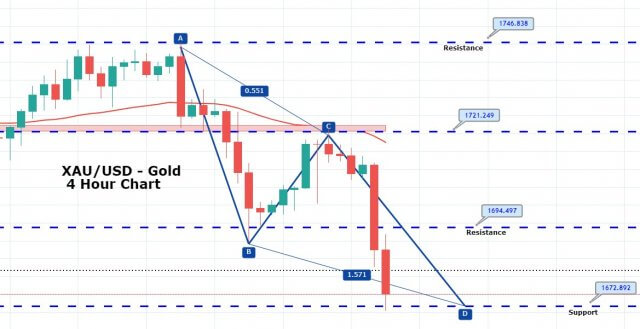 The precious metal gold prices fell sharply from 1,694 level to 1,671 level on the release of U.S. NFP figures. Earlier today, the gold was supported as the concerns between the United States and China getting worse day by day and not showing any sign of slowing down, rather U.S. Secretary of State Mike Pompeo showed love about Nasdaq’s move on listing rules for Chinese companies.

The US-China tussle was further bolstered by U.S. President Donald Trump’sTrump’s comments that the Chinese government has continually violated its promises to the U.S. and many other countries which exerted some downside pressure on the risk sentiment and turned out to be one of the major event that kept a lid on any gains in crude oil. Despite this, the U.S. Trade Representative Robert Lighthizer said that he feels “”excellent”” about phase one trade deal with the Dragon nation.


Technically gold has completed the ABCD pattern from 1,721 to 1,672 level. Closing of candles above 1,672 can drive bullish correction until 1,687 level before driving further selling until 1,660. We are already out of gold trade and secured 100 pips; however, check out the trade idea below.