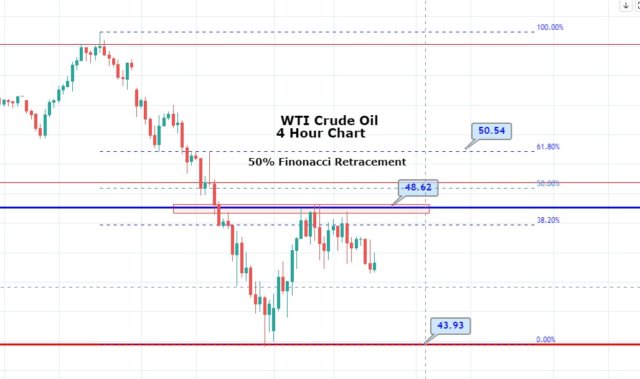 The WTI crude oil prices rose because the traders evaluated the latest headlines regarding OPEC’s meeting this week. At the moment, the U.S. Crude Oil WTI Futures gained 1.4% to $47.45.

According to earlier reports, the OPEC+ alliance will agree to a total production cut of at least 1 million barrels per day from this quarter onward to fight the impact caused by the deadly coronavirus outbreak.

On the other hand, the prices were also supported by a lower-than-expected rise in crude oil inventories in the United States, easing some concerns of oversupply in the world’s biggest oil consumer.

It is deserving to consider that Saudi Arabia wants extra cuts of 1 million to 1.5 million BPD for the next quarter and to retain current reductions of 2.1 million BPD in place until the end of 2020.

The geopolitical tensions in the Middle East also increased prices. The Saudi-led alliance fighting in Yemen said it had stopped an attack on an oil tanker off Yemen’s coast on the Arabian Sea.

The WTI crude oil inventories rose by 785,000 barrels for the week ended Feb. 28, the EIA said. That contrasted with forecasts for a build of 2.64 million barrels.

On the technical front, the WTI crude oil prices have completed the 38.2% Fibonacci retracement at 48.50 level. Closing of candles below 38.2% Fibo level is driving further bearish bias for the crude oil, and it may lead its prices towards the next support area of 45. Continuation of a selling trend can cause a further drop to 43.85. Alternatively, the bullish breakout of 48.50 can lead oil towards 50 and 50.54 levels. The MACD is crossing into the selling zone, supporting the bearish bias. Consider looking for sell trades below 47 today to target 46.10 and 45.86. Good luck!