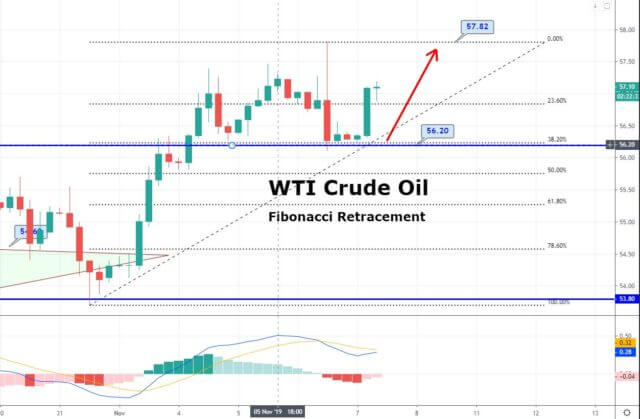 From now, we expect many negative factors to increase. The risk we feel, especially with the recent crude oil inventories builds and reduction in demand anticipates, could be the bearish trend in the prices in the energy markets.

WTI crude oil prices got some support during the starting of this week due to expectations that China and the United States were close in the signing of the trade deal.

As per the recent updates, the report came that the signing of the deal may not be signed during this month and will likely happen later this month. By the way, it all depends on the discussion between the Sino-US.

Technically, the WTI crude oil has completed a 38.2% Fibonacci retracement on the 4-hour chart. Closing of Doji candles above this level is suggesting bullish bias among traders. Most importantly, crude oil has recently closed a bullish engulfing pattern, which may drive sharp buying in the black crack.

On the upper side, crude oil may face resistance at 57.50, along with support at 56.20. I will be looking to trade a choppy session today until this range breakout.