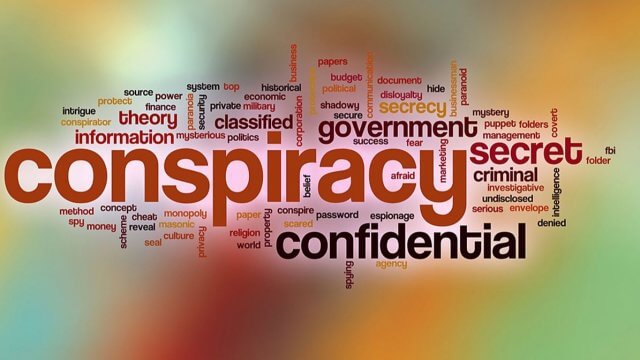 A conspiracy is definitely one of the terms that arise a lot of pros and cons among people, depending on the way of their thinking and using their common sense and healthy logic and presumptions. The majority of the crowd get into the endless world of conspiracy theories once they start getting older and being disappointed with society, limited by life responsibilities, and faced with their own failures. By blaming someone else behind the curtain, the one who we actually cannot affect and who is pulling the triggers is one of the paths to enter the wide world of conspiracy theories. These people believe that there is always something suspicious going on behind the scene in every single fragment of their life, without actually being able to prove most of their beliefs.

On the other hand, many individuals among us completely deny the existence of any conspiracy and these are usually people that buy everything being served to them via media, commercials, press, celebrities’ statements, etc and not having developed their critical thinking or use of logic in their mindset. They even use the term “conspiracy theory” in a pejorative sense, dismissing the possibility to consider other side arguments.

None of these two aspects can actually be either proved or denied totally, but one thing stands for sure – conspiracies do exist, at least in a form of financial scandals, political affairs, or related fields where power and money play main roles. The games with big money are controlled by people having big money, influence, and power and that is the only certain conclusion proofed by nowadays so many times. Large funds and institutions are usually connected with placing news on the market, which hence provokes adequate moves on the market.

And let’s remind ourselves for the moment that these moves are made, for instance, through the Bloomberg terminals. The abovementioned terminals belong to partnership Bloomberg L.P., which is 88 percent owned by Michal Bloomberg, the US Democratic party member, and a former mayor of New York City. The entity, together with its subsidiaries makes about USD 10 billion of revenue annually, providing necessary information to the people doing business in finance all over the world through its Bloomberg terminals. Over 320,000 people pay the subscription for use of this software and this is not the only company he possesses through its subsidiaries Bloomberg news and television as well.

It is not therefore hard to assume that someone with that much influence and money imperia would be capable to affect the market and place the news of his own interest, especially considering the fact that M. Bloomberg belongs to the Democratic party, lacking, however, to have the Trump’s charisma, speech and in general capacity to beat him on the Presidential elections. On the other hand, he would be probably capable to set the stock market circumstances and trade trends in the favour of his party, simply because he is in a position to control these factors. It would not be hard to imagine that he could easily start the recession or another financial crash, not him personally of course but by using that great influence he has. But this is something that is yet to be seen.

On the other side, the US Democratic party itself has used the allegation of another conspiracy theory-surprisingly-through Bloomberg news, as a weapon against Trump’s administration. They alleged that the so-called QAnon internet movement, being supporters of Donald Trump and part of his voting body could potentially become very dangerous or even an inspiration for domestic terrorism acts. Although it remains unknown who is actually Q, the allegations described him as a -positioned governmental officer, supporting Donald Trump and having access to very confidential peace of information related to US national security, nuclear weapons. The QAnon movement originates actually from a connection with another conspiracy theory in the past – during the US Presidential elections campaign back in 2016.

As we can remember, Trump’s opponent and the democratic candidate was Hillary Clinton. The affair that occurred at that time was so-called PizzaGate, and it pertained to the sex trafficking involving children around pizza restaurant in Washington. The conspiracy theory was relating the leading democratic politicians to this affair and Hillary Clinton among them as well. It is, however, difficult to prove how massive is the crowd that supports this theory, especially because they seem to get their support mainly via the internet and online.

Let us, though, come back to the financial conspiracies, which seem to affect the trader’s daily life and certainly have a large impact on the common people’s loss of money, their capital, or retirements. Why are the crowd and the common trends usually the ones that we follow, without having a second thought that the result may not be so brilliant as it may seem in the beginning?

If we understand the control and the power on the forex market it may be easier to prevent the traps and find ourselves in a way better position. The so-called Big Banks are the ones controlling the fluctuance and the times of raises and falls on the stock market, controlling that way the prices going up and down. The Interbank, being the network of all banks present at the market, cca 45 of them, is consisted of a couple of major ones:

Deutsche Bank, Citi Bank, JP Morgan, HSBC, and some of the Chinese banks. As the banks are in constant need of liquidity, they need extra money to put it out there in a market. But their main advantage in relation to traders is that these banks are aware a priori where each order sits, in which direction it goes, does it have tendencies to go long or short on the market, and in which time frame. This is something that puts them in a position to control the market, and once they do, it becomes very hard to respond. Banks are also well connected to the people of great influence, and once they publish information, the major crowd is going one way, for example going long for a certain type of currency.

The banks then cut that trend and start going short and this is the point where people lose their money. Not always, though. In order to continue this game and to keep playing the traders must also win sometimes. But sometimes only, and this is the so-called “Black Jack theory”. It is a small win, with a strong psychological impact: makes one feels good, smart, and capable to do so much more. And this is the momentum where the majority of people, instead of taking their money and invest in something else, keep playing. And they usually lose in the end, but the game goes on. A good comparison with the forex market here would be a casino, that functions the same way.

How dangerous it is to follow the crowd may be shown on the example of the EUR/CHF crash back in 2015. That was the pure example of how can banks affect price going one way while traders are going the other way. At the aforementioned time, the Swiss National Bank had ordered a pegging of CHF to EUR, meaning that CHF will not drop below the EUR 1.2. Pegging is the way of controlling one country’s currency rate by fixing it to another, presumably more stable currency. As a result of this, the common thought of the majority of traders was to put long on EUR/CHF with the thought in their mind that CHF could only go up and not down. What happened next was that the above mentioned banks used their influence, power, and capital and persuaded the Swiss National Bank to remove that peg. And the swiss national currency went down, provoking one of the biggest financial crashes in a newer history. Not only traders had lost after this happened, but entire platforms and funds crashed and closed and it all happened in a time frame of one day. Afterward, the CHF started going up again slowly, but that was not enough to repair the damage.

The common people cannot compete with big banks, the banks will always be one step further, if not for anything else then because of the fact that they had the information prior to simple individual trading on the stock market. There is, however, a way that one can profit and make smaller benefits from time to time, by using the market moving in waves and by going out with a profit and investing again somewhere else at the right timing. This would be like turning the above-mentioned BlackJack theory in his own favor and there are tools in a market that can help with this.

One of the theories in trading against the crowd is the so-called contrarian trading approach and is worth mentioning in the context of what is being said so far. Contrarian trading is trading against the current market sentiment. The market sentiment is shown on some financial platforms that show the indicators in which direction traders are positioning all over the world, showing the percentage of traders going long and going short or whether the market signals are bullish or bearish. This is being used as some sort of a prediction, to anticipate prices direction in a market and make a proper move timely.

Hence, trading against the current market sentiment would actually mean that if the present situation on a market shows that the majority of the investors are going short, the contrarian will go long and vice versa. Such a way of trading requires, of course, in-depth knowledge of the market circumstances, updated information, experience and follow up of the client sentiment indicators mentioned above. In that sense, one will be able to figure the exact entering and exiting points while trading, in conjunction with other indicators. Trends get to some point when they become exhausted and recognizing that moment is vital for contrarian trading-if the masses are going one way, contrarian will do the opposite but at the right timing. That is why some prior experience is needed here, in order to be able to recognize such moments.

To put a bottom line and pull out a conclusion here, it is important to say that we should not ignore conspiracy ideas and theories completely but to be able to determine their impact on money, power, influence because it all ends up for these motives. Should be aware of fake news, half-true news at certain moments and open up our minds and think of the reason why such information is placed to us right now, and how this affects the behavior of the investors, politicians, etc. Conspiracies had existed through numerous affairs and historical happenings in the US for many decades now, from JFK murder to the aliens and bunch of secret agents working together for evil purposes or whatsoever.

However, it is very important to sort out the information, and if we talk about market trading – to avoid following the masses.