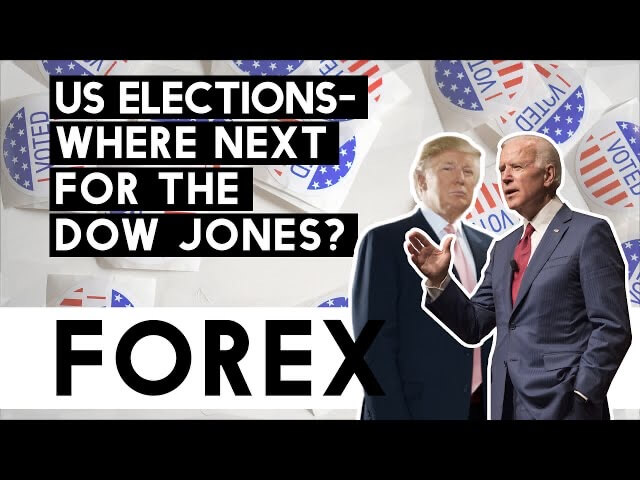 Where Next for the Dow Jones? US Elections in sight.

Thank you for joining this forex academy educational video. In this session, we will be looking at the Dow Jones 30 industrial average index.

In this chart, we can see price action going back to the 15th of July why where the index was at 24,659 and where it had since rallied to 27,889, which is quite staggering when you realize that’s the record high before the coronavirus was just above 29,000, and where the United States is still in the grip of the covid pandemic and where businesses are suffering badly and where unemployment is still at historic highs not seen since the second world war.

And yet the Dow Jones stock markets, one of the benchmark indices in the United States, is flying in the face of fundamental analysis, and indeed common sense, and is rallying to the upside almost at a record-breaking pace. Market analysts, traders, and leading names in the stock markets investing arena have been suggesting that the Dow Jones would collapse down to the levels we witnessed in march where the index was at 18,200: A total collapse from the high of a few weeks previously.

And while the index causes for a breather before the next push in either direction, traders will now be in to focus on the United States elections in a few week’s time, And where Republican Donald Trump is not doing well in the ratings due to his handling of the Covid virus within the USA, and where it was commonly believed that Donald trump’s policies on low taxation and less regulation, and a push for lower interest rates were of great benefit to American corporations, thus pushing the Dow Jones to the highs we saw before the virus pandemic. The US stock market loved Donald Trump. It is now believed that the Democrat opposition, Joe Biden, may sweep to a November election victory and that if this happens, many of Donald trump’s policies, including taxation, would be reversed.

Therefore, we should presume that if Joe Biden won the election and the democrats reversed Donald trump’s policies that the American stock market, including the Dow Jones 30 industrial average index, would suffer and where analysts predict a 20% fall on the basis that Biden reverse Trumps’ policies and would likely increase capital gains tax to as high as 39% for upper-income individuals, bearing in mind that it is the higher earners that tend to buy more stocks.

In times gone past when the biggest factor to determine the value of stocks was companies earnings, it would appear that this no longer matters, fundamentals have gone out of the window, and where if an incredibly disruptive and economically devastating pandemic cannot crush the Dow Jones industrial average, we should in fact not be at all surprised that not even an election defeat for Donald Trump will necessarily mean a collapse in the Dow Jones index. In fact, if the market is purely driven by trend, which it appears to be, we could see the previous highs breached. Sellers beware.