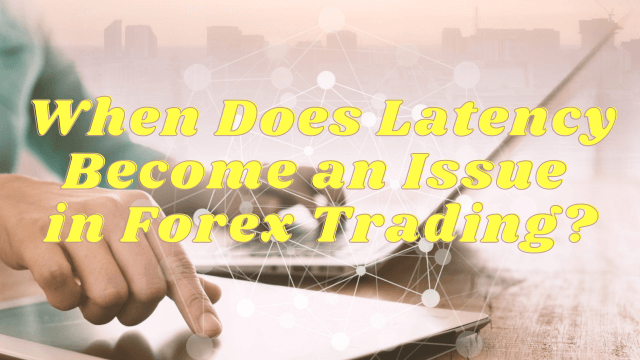 It is important that before we ask that question, that we understand what latency actually is. You may have heard the term if you have ever played a video game online and if you have most likely experienced the consequences of it. Latency is simply defined as the delay or the lapse in time between a request and a response. When does this lapse become an issue in Forex and how can you overcome it? Read on to find out.

If we go back to the video game idea, when you press button A, the latency is how long it then takes for the action to be performed by the character. In a trading sense, the latency is the amount of time that it takes for your action to be executed and to interact with the markets. Latency will affect your ability to read the markets, the ability to act on any changes and actions, and pretty much everything else that you do.

The issue of latency has become more and more relevant as technology progresses. You will often now see brokers advertising their latency and execution times, especially if they are pretty low. #For the normal user, this means very little to him, but for those looking to get the most out of their trading and to squeeze every single penny out of their accounts then it can be relevant. Now that technology is far better, the need or want for better latency and execution ties is also greater.

Latency is prevalent in everything that you do when it comes to trading, especially when using a trading terminal such as MetaTrader 4 (there are many others available too). Each and every aspect of your trading is influenced by the latency.

The magical flow of market data being streamed to your trading terminal is affected by latency. The market starts out at a marketplace or exchange, it is then passed on to the trader who is then able to look at the data within the trading platform of their choice. The speed that this data is transferred between the exchange and the users terminal is often measured in milliseconds. Latencies can be found within these streams, latencies can take place at the exchange or market-based servicers, the broker that you are using can cause additional latencies, your own internet connection can of course create latencies and is one of the larger reasons for having them, and your computer hardware and software can also cause latencies within your trading operations.

One of the more common problems when it comes to latency with the market data is known as data lag, This is where there are problems or inefficiencies with the data stream, many of these issues are completely out of yours as a traders control, such as problems with the hardware at the exchanged, in addition to bottlenecks with the internet connections which can happen without any sort of warning and won’t be recognised by the trade or those monitoring the services for a period of time.

There can also be some issues when it comes to order routing and execution, these are also the areas where latency can have the biggest effect and can potentially be the difference between a profitable or losing trade. Being able to rely on consistent order filing and low slippage on those order fills is vital for a profitable trading experience and this all relies on the data actually arriving at the market ahead of the competition.

The general route of an order and the execution goes along the lines of the order being entered by a trader remotely on an online trading platform, the order is then received by the broker, the order is then relayed by the broker to an exchange or market. The order is then placed in a queue at the exchange or market. That is generally how it goes, however during each of the four states mentioned above, there’s a chance that latency can cause some issues with this process including some delays. The problem with latency in this situation is that any sort of delay can mean that the order will be filled, but it will be filled at a price other than what it was executed at, so it could give you a much worse opening price than originally planned.

So latency can have an effect on your trading. It can be the difference between making a profitable trade or having a loss. There are, however, some things that you are able to do that can help you to manage the latency that you receive. Of course, some of it is completely out of your control, with very little you can do, but there are some things that can be done to help. For larger more institutional firms, there is something known as DMA which stands for Direct Market Access, this enables them to simply bypass a number of different stages of order executing. For a DMA order, there is simply the order being placed by the trader via a connection to an exchange or market, the order is then placed in a queue ready for execution at the market or exchange. So you can already see that half the stages are gone and so there is much less room for any latency to creep in and cause issues.

The problem is that this is not really relevant for retail traders as DMA services are quite limited. As technology is progressing through, more and more brokers are looking to bring this sort of service to retail traders, claiming to offer direct access to the markets, but until it is properly available for retail traders, there are a few things that you could do to try and help your own latency issues. Some of these things include ensuring that you have up to date computer hardware that can easily handle the running of the required software, regularly perform internet connectivity tests and ping servers to ensure that your internet is remaining stable, you should also evaluate your trading platform on a regular basis, to ensure that there are no lag issues in the updating of the charts or any other features.

Latency can be a real issue when it comes to trading and it is something that you want to ensure that you do everything that you can to keep low. It can be the difference between a profit and a loss, so do what you can to reduce it. Check your hardware, your software, and your internet, if your broker constantly has slippage and latency issues then you could potentially start looking for one that offers slightly better latency to the markets. Just be sure that you regularly monitor what latency and lag you are getting so you can be on top of your game and to ensure that you are getting the most out of your trade executions.