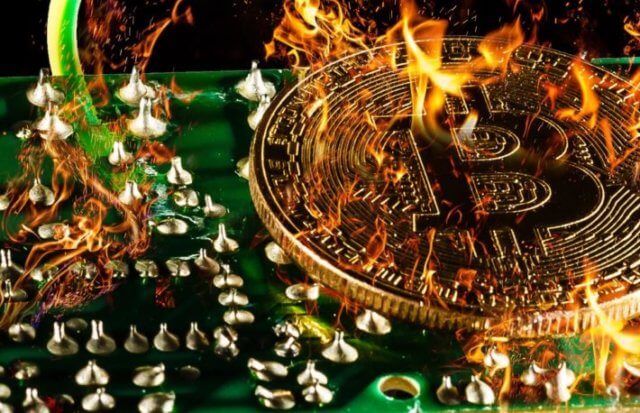 Token burning, a concept unique to the cryptocurrency market, is gradually becoming an intrinsic feature of newer and future cryptocurrency projects. Even more recently, well-established altcoins such as Binance have adopted this concept making it worth the attention of any cryptocurrency investor.

As the name suggests, coin/token burning is the process of ‘burning’ coins, or rather, the irreversible destruction of coins/tokens in an effort to eliminate them from circulation.

To understand this concept better, let’s delve into how the whole ‘burning’ process works.

How Does Token Burning Work?

Despite the extreme image the phrase paints, token burning doesn’t involve any kind of token disintegration. In fact, it’s impossible to disintegrate coins since blockchain – the underlying cryptocurrency protocol – is immutable, meaning the protocol’s history and data cannot be altered in any way.

What actually happens is that the coins/tokens are algorithmically taken out of circulation by sending their signatures to a public address known as an ‘eater address.’ The keys to this public address are private and cannot be obtained by anyone. In essence, it means that once the tokens are sent to this address, they are unrecoverable and can never be used. Ever!

All burnt coins/tokens are then recorded on the blockchain transparent ledger system for all nodes to see and confirm that the coins have been indeed destroyed.

While token burning serves the same purpose, which is the elimination of coins from distribution, it differs in the scope of execution. For instance, some projects will execute a one-time burn after their Initial Coin Offering (ICO), to help eliminate any unsold tokens. Other projects favor periodic burning of tokens based on the token’s utility and size, among other variables. Binance coin (BNB), for example, burns its tokens quarterly, with an aim to reach a threshold of 100 million BNB burned tokens. Alternatively, project developers can buy back their tokens from exchanges and take them out of circulation by sending them to the ‘eater address.’

A few other coins, such as Ripple, burn token progressively with each transaction. When parties transact using the coin, they must incur a transaction fee, pretty much like sending Bitcoin to another BTC wallet. However, in the case of Ripple, the transaction fees aren’t awarded to miners. Instead, these fees are automatically burned.

Why do we need to burn tokens?

It’s quite startling to understand why crypto projects burn their precious tokens. But the process comes with its own benefits, favoring not only the developers but also the coin users. Here are the main motives behind token burning;

☑️Increase the Value of Coins

The most common reason behind token burning is to boost and encourage the growth of a coin’s value. Going by the economic laws of demand and supply, reducing the supply of a commodity in the market fuels the demand for that particular project. As such, by burning a token, the supply of a coin reduces in equal measure, prompting a demand of the coin since there is a lesser amount of coins to satisfy the people’s demand. Consequently, the price of the coin appreciates, stabilizing its value.

The provision of dividends is closely tied to the resultant increase in coin value after burning. However, this benefit works best in security tokens rather than in their utility counterparts.

A security token is classed as an asset, and thus those holding it are regarded as investors. This is not the case with utility tokens.

Nonetheless, with the increase in a coin’s price after burning some of them, the developers indirectly reward the coin holders, since the value of the asset has appreciated. This move plays out perfectly in countries such as the USA, where cryptos are discouraged from handing out dividends directly to their token holders.

All cryptocurrencies are under the computing realm, which makes them vulnerable to cybersecurity threats. Having this in mind, it’s easy to understand why tokens can fall victim to Distributed Denial-of-service attack (DDOS), especially with the growing number of cryptocurrency users.

Basically, DDOS is a cyber-attack in which the perpetrator seeks to flood a system with an influx of requests, so as to prevent the execution of some or all legitimate requests.

Ripple is a perfect demonstration of how coin burning prevents spamming. By automatically burning a portion of the transacted amount, Ripple discourages the need to overload the network to gain a quick profit.

Although in rare cases, sometimes project developers make serious mistakes that can only be corrected by token burning.

For instance, a project may issue an excess amount of coins or experience an increase in the number of tokens as a result of technical errors. In other cases, tokens unfit for trading. For example, those meant to support a transaction may end up into public circulation. Theoretically, an increased supply translates to lower demands, plummeting the coin prices.

As a corrective measure, the excess tokens are burnt to avoid some of the consequences brought by the errors incurred.

Gaining trust from coin holders is the ultimate goal of any cryptocurrency, particularly one that is new in the market.

After the Initial Coin Offering (ICO) of new crypto, its price is bound to increase. The project developers may decide to make more profits by selling excess coins to exchanges, at the prevailing spiked prices, which is unfair.  More so, by selling the excess coins, it would lead to allegations that the developers are only committed to gaining profits and that their coin has no real value.

However, burning the excess coins shows that the developers are committed to the long-term growth of the coin. As such, the funds raised from the ICO will be used for business operations. But most importantly, burning excess coins help decentralize the project.

As hardcore as it may sound, token/coin burning is proving to be an effective method of maintaining a balanced crypto-ecosystem. With time, future cryptocurrencies will certainly adopt this mechanism giving its numerous benefits, especially in a coin’s infancy stage.

Also, with the hope that cryptocurrency space will stand the test of time, coin burning is arguably the best bet to maintaining the long-term value of a crypto.