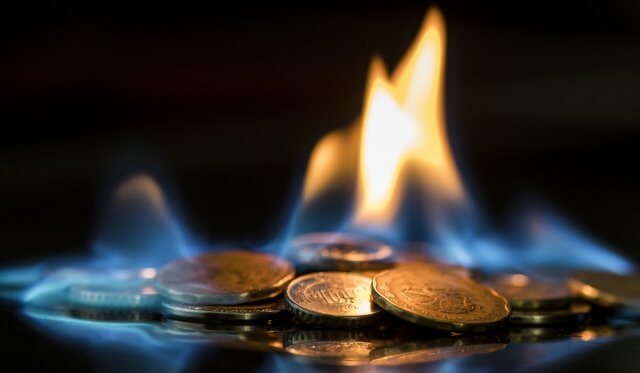 The crypto adoption juggernaut rolls full steam ahead. You need only look at the increasing number of outlets accepting crypto payments to prove this. Even governments that once approached them with cynicism have caught on to the act. The big migration to CBDCs is now a matter of time.

Whereas the growing acceptance is positive, it comes with its misgivings. Although the proliferation of coins and tokens expands choices, it raises concern about sustaining cryptos’ value within the cryptosphere.

Cryptos are good at mitigating inflation, but they’re not immune to it. Crypto projects have had to devise the means of controlling this. As such, coin burns have been the tool of choice. But what are coin burns? How does one execute them? Importantly what is their value? Stick around as we go deep into the subject.

What Is Coin Burning?

Coin burning is the process of removing a set volume of cryptos from circulation.  In doing so, developers and miners reduce their total supply.

Coin burning entails sending cryptos to public addresses with unobtainable private keys. Also known as eater addresses or blackholes, these addresses render the coins useless. Nevertheless, they allow for their public viewing and peer verification on the blockchain.

Coin Burning Varies With The Project

Depending on the frequency of the coin burning process, we can classify it into two broad categories:

What are The Approaches to Coin Burning?

There are two major approaches to coin burning. These are:

In this category, we have coin burning mechanisms embedded in the project’s core protocol layer. We may divide these into two main groups.

i) Proof of Burn Mechanisms

These use the  Proof of Burn (PoB) consensus that requires miners to prove that they’ve burnt some of their coins. PoB has several variants:

Introducing a cost to transactions prevents spamming and DDOS attacks that compromise the network. Projects like  Ripple (XRP) and Request Network (REQ) integrate a burning mechanism for every transaction on their network. Though indirectly, their Users ‘incur’ the cost of trading on them. The ecosystem gains in value resulting from a reduced supply of native coins.

These are mechanisms informed by a project’s economic considerations. They may be one-offs or periodic.

i) Mopping up of The Unsold ICO Tokens

At times ICOs fail to meet their hardcaps. Consequently, remain with unsold tokens. The projects may decide to destroy these to maintain their credibility.

ii) Paying out Dividends to the Coin Holders

Profitable projects may use their profits in buying back their native coins from the public. They then destroy the repurchased coins, thus paying them some dividend, which increases the value to coin holders.

What are the Steps Followed in a Coin Burning Event?

The coin burning event follows a sequence of four steps. Here’s its breakdown:

You’d think that coin burning is beneficial. Wouldn’t you? After all, you have Key players like Binance and Tether performing them. What then are its benefits

i) Appreciation in the Crypto’s Value

Cryptos are decentralized. In essence, market forces determine their prices. Coin burning depletes the sum of coins serving the market. As a result, their value rises to attain equilibrium. The attainment of market equilibrium is essential in stabilizing the price(value) of the crypto.

As stated elsewhere in this article, coin burning is key to eliminating Spam and DDOS. Accordingly, the network becomes stable.

Crypto projects initiate ICOs to get public buy-in. Towards these, they set aside a certain percentage of the coins hoping that the investors will acquire the whole lot. However, things don’t always go that way, resulting in a remnant of those coins.

The token insurer burns the coins remaining unsold from the ICO. They do this to ensure a level playing field for all investors. Were the issuer to keep the unsold coins, they’d have a massive advantage over other investors. Coin burning helps win the trust of other investors and incentivizes their stay within the project.

A case in point is the Neblio cryptocurrency. Its team burned 122 million tokens that remained from their ICO. It sent them to an unspendable NEBL address.

At times projects realize errors in the creation of their tokens or coins. As such, they turn to coin burns to remedy this situation. A case in mind is Tether. The company realized that it had erroneously produced $ 5 Billion USDT. It resorted to a coin burn to maintain its 1:1 peg to the USD. Allowing the extra coins to stand would have destabilized the ratio.

vi) Guaranteeing The Developers’ Commitment to the Project

Coin burning signals the Developers’ commitment to the project. Look at it this way: the coin burn reduces their supply. At the same time, it increases the value of the coin or token in question. Burning is indicative of the developers’ desire to see the project grow in value and network function.

vii) Reduction of The Competition Between Miners

The Proof of Burn (PoW)  consensus is a popular offshoot of coin burning. Through it, a user destroys their coins to gain mining rights.

PoB matches the number of blocks a miner can verify to the volume of coins they burn. This way, one’s mining ability increases with increased burning. Thus it reduces the number of miners and competition for resources between them.

Since PoB favors the large-scale miner, they employ decay rates. This feature reduces one’s mining capacity with every verification. For them to remain profitable, it compels them to invest in more tokens to burn.

Although touted as the fix against inflation, cryptos aren’t immune to the same. Consequently, projects have had to find ways of guarding against it. Their default method has been the institution of coin burning: the deliberate removal of a given amount of coins from the market. It may be a one-off event or a periodic undertaking. Additionally, it could be a procedure hardwired into the project’s core protocol layer or driven by economic consideration. Whatever the cause, coin burning is an essential undertaking that, among other positives, infuses stability and confidence in any crypto project.