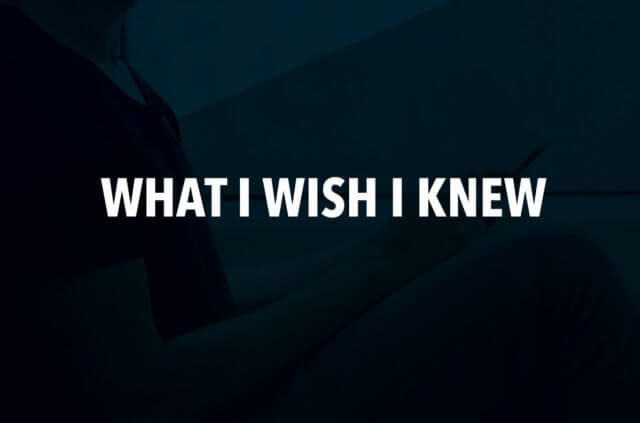 One thing that we can all be sure about, hindsight is a fantastic thing. It allows us to look back at what we have done in the past and to then consider what we maybe could have done differently. While we are not able to change the past, although it would be great if we could, we can still learn from it and that is what we will be doing today. Now that we have been in the trading game for quite a few years, we have learned a lot of new things, things that would have been very helpful for us back in the past. So let’s take a look at some of the things that we wish we had known a year ago that most likely would have helped us to be far better traders.

Do Not Trade Too Soon

One thing that we did quite a lot a year ago was to trade too soon. This is not in relation to not having the knowledge, we had already been trading for a bit of time before this so we had an idea of what we were doing. What we did keep doing though is putting on the trades too early, we had a trade lined up, did a little bit of analysis, but then did not wait for the additional confirmations that were needed. Instead, we simply placed the trades. Some went well, some did not, and those that went into a loss were easily avoided if we had just waited to place the trade and we would have seen that the markets went against us. So we simply wish that we had a little more patience when it came to policing out trades.

You Will Be Profitable

This is one quite personal to me. A year ago, I had a lot of doubts. I have a lot of thoughts that I may not be successful and that made me go days or even weeks without actually trading. In the position that I am in now, I am profitable month on month. I just wish that I had known that I was going to be successful. I would have had the motivation to trade every day and the motivation to put in more effort along the way. However, I am happy with the position that I am in now and will not dwell on the lost potential that would have been there.

No Single Strategy Will Always Work

About a year ago I only used a single strategy. It was my go-to strategy and it is what I used pretty much all the time, no matter what the conditions of the markets were. This is something that we know now is not the best way of going about things. In fact, it really held us back and prevented us from making quite a lot of profit. What we know now is that we need to have a number of different strategies in our arsenal if we want to really be successful. It will also allow us to trade better in different market conditions rather than trying to always adapt our single strategy, which can only stretch so far. So we just wish that a year ago we have learned a number of different strategies instead of sticking to just the one.

Use Stop Losses With Every Single Trade

We did use stop losses, just to make that clear, but we did not use them with every single trade. Due to this, we made a few losses that are a little larger than they probably should have been. This ultimately would have saved us a bit of money in the long run. We now know that we need to have the stop loss set on every single trade, every single one, no matter how sure we are around no matter how small or big the trade is. Always have one set, regardless of anything else, it will save you money and the one that you miss could be the one that would have saved your account.

If we take the tragedy out of the Covid-19 pandemic, then the pandemic gave us a lot of opportunities as well as a devastating effect on the world economy. A lot of people lost a lot of money when the markets decided to fall. However, while the stock market collapsed, the forex markets were a little more stable. It was, of course, a lot more volatile but it wasn’t blowing accounts every single day. What it did offer though was a lot of opportunities. As different countries went into lockdown at different times, the markets reacted accordingly. We stood back from the markets as a lot of trades did, but this meant that we missed out on some fantastic chances to make a lot of money.

Some traders took advantage of this. As the UK went into lockdown, they shorted the GBP currency. As the USA went into lockdown they shorted the USD currency, the same for Europe and other countries. As the countries went into lockdown, their economies shrunk which in turn made their currencies a lot weaker. The perfect opportunity to profit from them. There were, of course, still a lot of dangers in the as it was very unpredictable, but there was certainly a lot of money to be made and as it happened. We wished we were involved but didn’t want to take the risk. Now though with hindsight, we still wish we were more involved.

Those are some of the things that we wish we knew a year ago. Some of them would have helped to save us a little bit of our profits by reducing losses, others would have helped us to have made a lot more profit, and some would have just made us a more knowledgeable and consistent trader. Whatever you are doing now, think back to a year ago, were you doing the same things? You were most likely not, some of them yes, but some of them no. We are all developing as time goes on, so while hindsight is good. Looking back at how far you have come is good. Try not to dwell on the past or the mistakes that you have made, look to the future and the successes that you can make in the future.