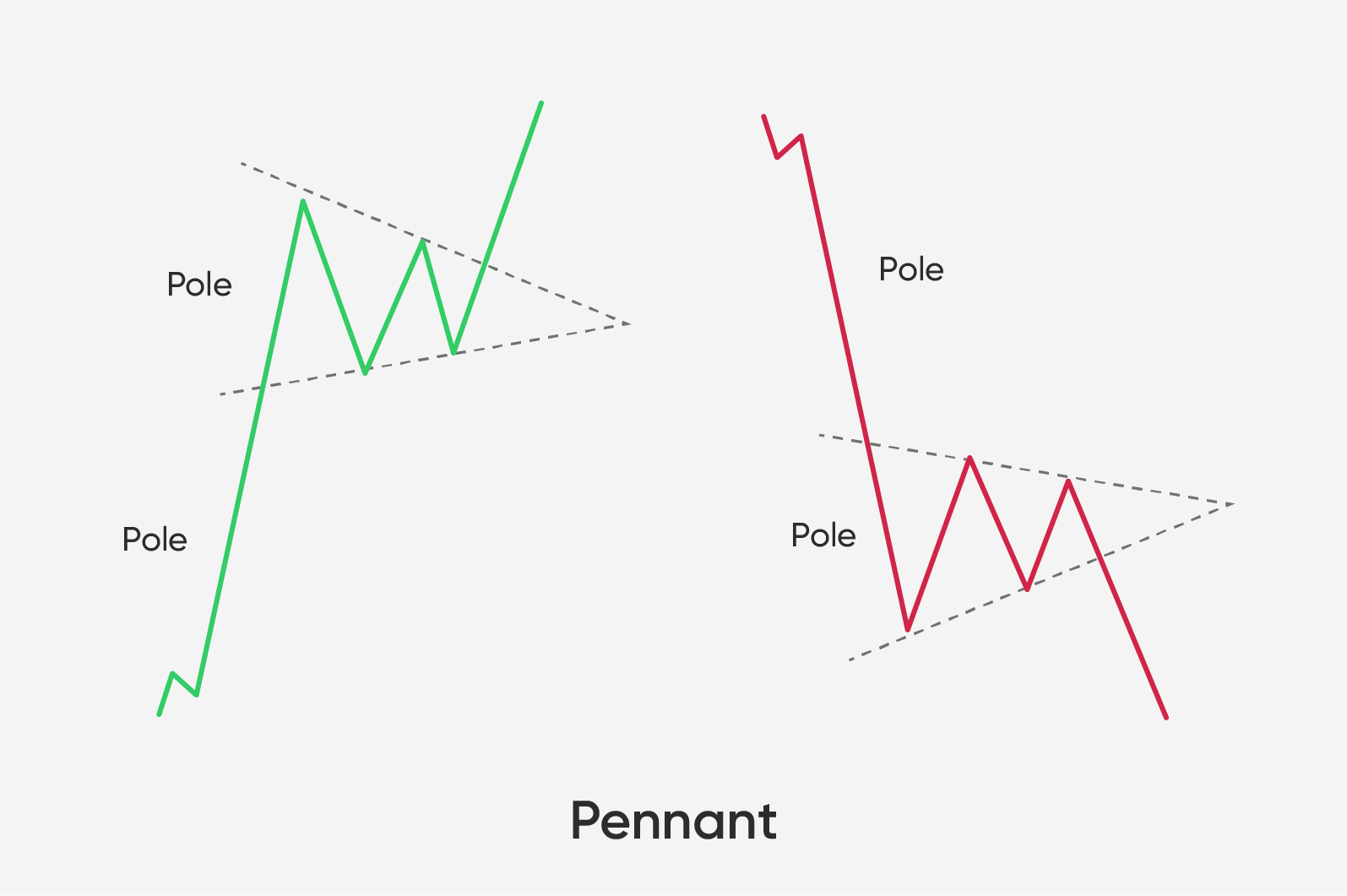 The pennant formation is a formation that looks much like a flag pattern but is triangular in shape. These formations tend to appear at the halfway mark of a trend. When a pennant forms, the trading volume tends to contract, while increasing only after the breakout. To simplify it even further, pennants look like a small triangle sitting on a long pole.

Pennants are a variation of a flag pattern, which means that it is made up of a body and a pole, much like the flag. Just like with the flag pattern, the pole height can be used to create a price target after a five-wave breakout from the body of the formation.
They are associated with very mild volatility alongside limited price fluctuations, which differentiates them from flags and triangles.
Difference between a triangle and a pennant
While pennants are most similar to flag formations, it is quite easy to distinguish one from another. On the other hand, triangles and pennants can be mistaken for one another due to the similarity of the pattern if we are not careful. However, they have some key differences which can be used to determine which one is which. 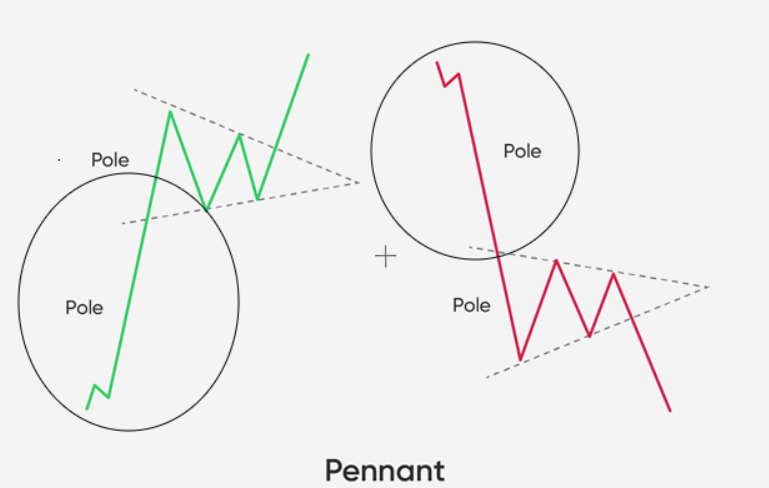 The symmetrical triangle and the pennant both have conical bodies which are formed during a period of consolidation. The price consistently fluctuates between higher lows and lower highs, therefore creating two converging trendlines. However, the part which many people know but tend to miss during a live trading session is that the pennant includes a flagpole at the start of its pattern, which is not the case with the symmetrical triangle. The flagpole is a sharp move accompanied by heavy volume, which marks the beginning of an aggressive move to the upside or downside. Price then pauses and forms the body of the pennant, before breaking out. 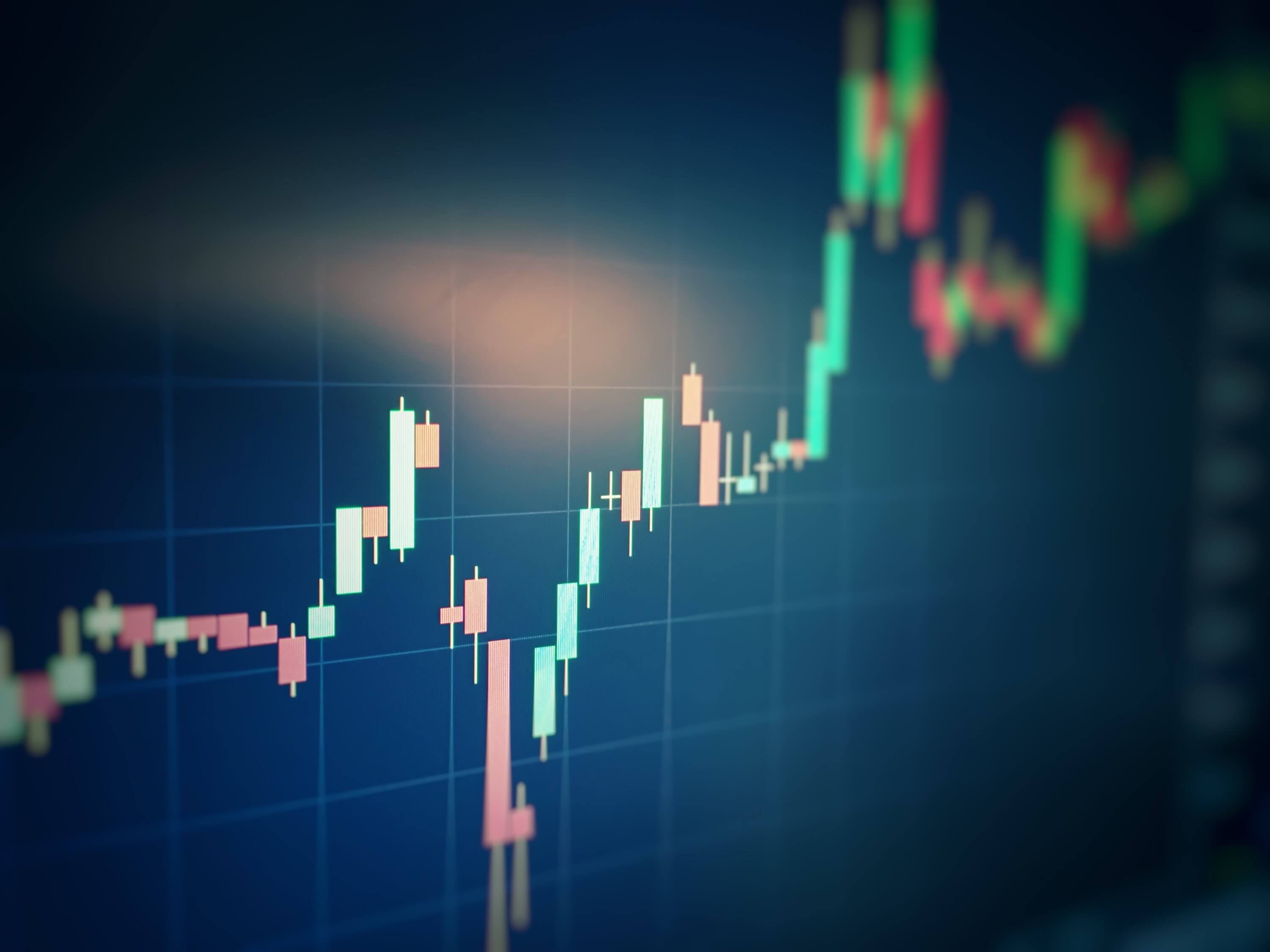 Another difference between the symmetrical triangle and the pennant would be the difference in their durations. The pennant is considered a short-term pattern that forms over a period of hours, days, or weeks. A triangle pattern, on the other hand, can take much longer, sometimes months or years. If a pennant pattern lasts for several weeks, it can be considered as a triangle as the flagpole is no longer important. 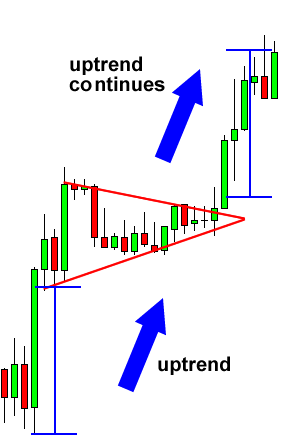 The breakout after a pennant formation should occur at or near the point of trendline converging, which is called the apex. However, symmetrical triangles usually break above or below the trendlines a bit sooner, namely one half to three-quarters of the way through the pattern. Therefore, triangles almost never reach its apex.

Pennants are a universal formation, which means that trading using this formation should be no different than using it to trade other assets. However, due to the volatility of the crypto market, one has to consider the duration of the formation itself. As the crypto market is much more volatile, the pattern formations tend to resolve quicker. Pennant formations, when trading regular assets, are not considered important on extremely short time frames, while that is not the case with the crypto market. They also grow into a triangle only after 12-13 weeks of not breaking out with traditional asset markets, rather than just a few weeks with the crypto market.

Recognizing pennants while trading cryptocurrencies can, just like with any other formations, be an effective way to improve your odds of profiting on a trade by determining the direction of the trend as well as the profit target.