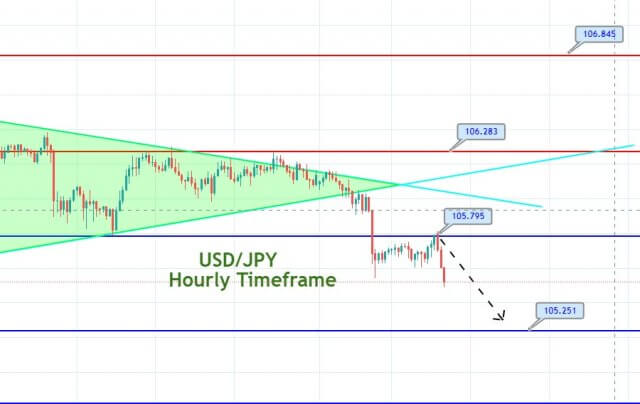 The USD/JPY closed at 105.730 after placing a high of 106.164 and a low of 105.547. The USD/JPY pair finally found some specific direction to follow and moved in the downward trend amid the broad-based U.S. dollar weakness. However, the improved risk sentiment around the market capped further downward movement in the currency pair.

The greenback came under selling pressure ahead of the U.S. Federal Reserve’s Open Market Committee’s meeting. The meeting is due to start on Tuesday and will conclude with the comments from Chairman Jerome Powell’s speech. The speech is expected to provide further decisions of the Federal Reserve related to average inflation targeting. The market participants are hoping that the Fed will remain dovish about its monetary policy on Wednesday.

The central bank seems to be satisfied with the interest rates being near-zero levels, and there will be no change in interest rates. However, the comments from Fed Chair related to further stimulus measures and monetary easing along with the inflation target will provide fresh clues about U.S. economic conditions. The U.S. dollar came under pressure as the House of Representatives have returned from summer break and the chances for the fifth round of stimulus measures to reach consensus have increased as talks would resume soon.

The U.S. equity rose on Monday after the Oxford University and AstraZeneca vaccine re-started its phase-3 trials and raised the hopes for economic recovery. The trials were paused due to some unexplained illness that was found in one of the participants last week. However, the trials were resumed and provided some strength to the USD/JPY pair.

Meanwhile, the statement by the World Health organization that in a single day, the record-high number of coronavirus cases were reported that raised fears for the resurgence of the coronavirus pandemic WHO reported that in the time of 24 hours, a record high of more than 307,000 cases was recorded globally which was the largest daily number since the pandemic started. This raised uncertainty in the market and supported the safe-haven Japanese yen that added further downward pressure on the USD/JPY pair.

On the data front, there was no release from the U.S. side, however, at 09:30 GMT, the Tertiary Industry Activity from Japan dropped to -0.5% in July from the forecasted 0.6% and weighed on the Japanese Yen. Whereas, at 09:33 GMT, the Revised Industrial Production from Japan in July rose to 8.7% from the forecasted 8.0% and supported the Japanese Yen that added further pressure on the USD/JPY pair on Tuesday.