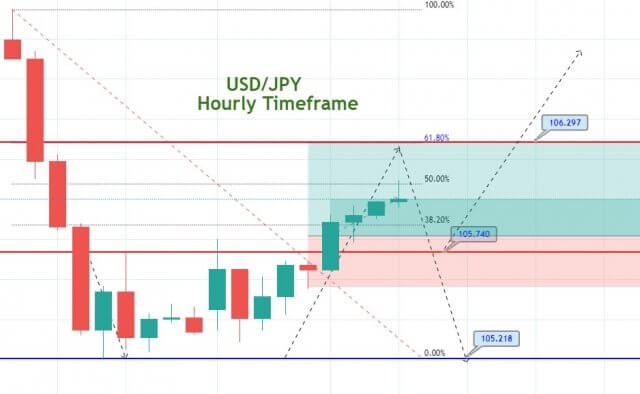 During Monday’s European trading session, the USD/JPY currency pair extended its previous session gains. They remained closer to 106.00 level due to the risk-on market tone, backed by the enthusiasm over a potential vaccine and medicine for the extremely contagious coronavirus disease. As well as, the better-than-expected Chinese Manufacturing and Services PMI data also played its positive role in underpinning the market tone, which eventually weakened the demand for the safe-haven Japanese yen. The receding worries over the Japanese political scenario could also be another factor involved in currency pair losses.

On the contrary, the broad-based U.S. dollar weakness, triggered by the risk-on market sentiment and downbeat prints of America’s Core PCE data, became the key factor that capped further upside momentum for the currency pair. In the meantime, the mixed Japan data was largely ignored by the currency pair bulls. At this moment, the USD/JPY currency pair is currently trading at 105.92 and consolidating in the range between 105.30 – 105.97.

At the data front, the preliminary Industrial Production climbed significantly past-1.2% forecast and 1.9% before print the 8.0% mark on MoM. Meanwhile, the annual figures were downbeat as 16.1% contraction against -15.7% expected. Moreover, Retail Sales fell 3.3% on MoM and 2.8% on YoY against 8.0% and 2.4% respective forecasts.

Apart from this, the reason for the upbeat market sentiment could be associated with the release of better-than-expected Chinese Manufacturing and Services PMI prints, which eventually raised hopes about the global recovery from the pandemic. However, the risk sentiment was further bolstered by the headlines that suggested a rush towards a vaccine. Besides this, the U.S. stimulus package’s probabilities also boosted the risk sentiment, which tends to weaken the safe-haven Japanese yen. The opposition Democratic Party voted in the favor to take a $1.3 trillion offer, which kept the market traders satisfied. On the contrary, the market trading sentiment relatively unaffected by the long-lasting US-China tussle.

Also supporting the market risk-tone was Powell’s new monetary policy framework, which fueled expectations of an extended period of low-interest rates and weighed on the U.S. dollar.

As a result of the upbeat market sentiment, the broad-based U.S. dollar failed to gain any positive traction on the day. The losses could also be associated with the Fed Chair Jerome Powell’s dovish signals at the Jackson Hole Symposium. However, the losses in the U.S. dollar became the key factor that kept the currency pair’s gain limited. Whereas, the U.S. Dollar Index that tracks the greenback against a basket of other currencies dropped by 0.09% to 92.293 on the day.

Looking ahead, the market traders will keep their eyes on the speech by Federal Reserve Governor Richard Clarida. Japan’s Final Manufacturing PMI will also be key to watch. In the meantime, the updates surrounding the fresh Sino-US tussle, this time over the South China Sea and the coronavirus (COVID-19) updates, could not lose their importance.


The USD/JPY is trading with a bullish bias at 106; it’s expected to trade higher until 50% and 61.8% Fibonacci retracement at 106.100 and 106.300 levels. The MACD is also a signaling buying trend in the USD/JPY pair. We have already closed the buying signal in green pips as the market is lacking volatility. Let’s brace to buy again over 105.740 level today. Good luck!