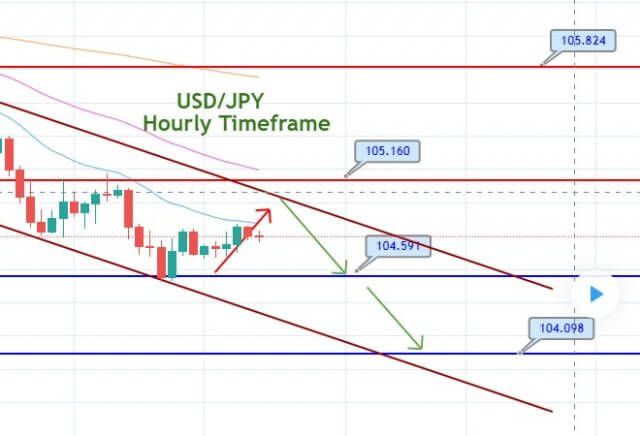 The USD/JPY stopped its previous-day bearish bias and picked up some bids around the 104.80 level, mainly after the downbeat prints of Japan’s National Consumer Price Index (CPI) for August eventually undermined the Japanese yen currency and extended support to the currency pair.

The currency pair dropped to the lowest since July 31, the previous day after the Bank of Japan (BOJ) upwardly revised the economic outlook. Thus, the currency pair failed to break its previous day thin trading range and still hovering below the 105.00 marks. Apart from this, the reason for the pair’s bearish bias could also be associated with the risk-off market sentiment, driven by the US-China tussle and Brexit concern, which tend to underpin the Japanese yen currency.

Meanwhile, the broad-based U.S. dollar weakness, triggered by the disappointing U.S. employment data, could also be considered the key factor that kept the lid on any additional gains in the currency pair. Currently, the USD/JPY currency pair is currently trading at 104.81 and consolidating in the range between 104.67 – 104.88.

At the data front, Japan’s August month’s National CPI dropped below 0.6% forecast and 0.3% previous readouts to 0.2% YoY, it no news as the Asian major has historically been struggling with stagflation.

Besides this, the risk sentiment favoring the pair’s sellers as S&P 500 Futures dropped by 0.10% intraday as Fed’s hint for another stress test for large banks and the U.K. scientist group’s push for another state lockdown. Furthermore, the worrisome headlines concerning the Brexit or the tension between the US-China, not to forget the rising coronavirus cases, weigh on the market trading sentiment.

At the US-China front, the tensions between the United States and China picked up the further pace after the American Undersecretary for Economic Affairs Keith Krach’s scheduled visit to Taiwan. Moreover, the friction was further bolstered by China’s state media’s comments that directed warned the U.S. with the “use non-peaceful and other necessary means to solve the Taiwan question once and for all.

Additionally, weighing the market trading sentiment could be the fears of rising COVID-19 cases in the U.S., Europe, and some of the notable Asian nations like India, which fueling fears that the economic recovery could be halt.

At the USD front, the broad-based U.S. dollar failed to stop its early-day losses and took the further offer on the day as doubts persist over the global economic recovery from disappointing U.S. employment data witnessed statement data. Apart from this, another rout in U.S. tech stocks also undermined the U.S. dollar. However, the U.S. dollar losses could be considered the key factor that kept the pressure on any additional gains in the USD/JPY pair. Whereas, the U.S. Dollar Index, which tracks the greenback against a bucket of other currencies, dropped by 0.05% to 92.927 by 12:48 AM ET (5:48 AM GMT).

The employment data released on Thursday showed that initial jobless claims dropped slower than expected at the data front 860,000 claims were filed over the past week against the predicted 850,000.

Looking forward, the market traders will keep their eyes on the USD moves amid the lack of major data/events on the day. However, the U.S. Michigan Consumer Sentiment Index for September, which is expected 75 versus 74.1 prior, will likely help resolve near-term USD moves. Furthermore, the risk catalyst like geopolitics and the virus woes, not to forget the Brexit, will also be key to watch for the fresh direction.