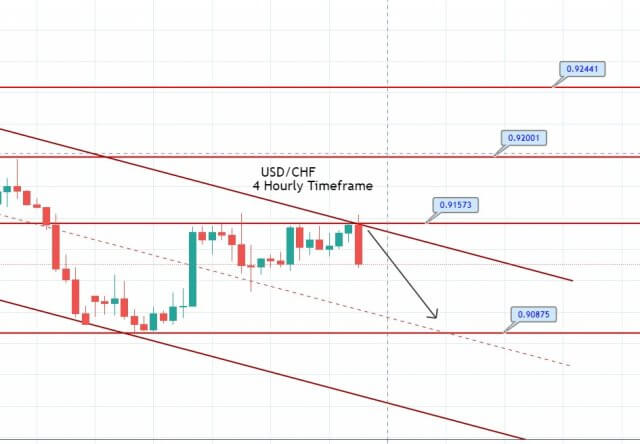 The USD/CHF extended its previous session losing streak and hit the intra-day low around the 0.9130 regions in the last hours. However, the reason for the currency pair prevalent bearish bias could be attributed to the risk-off market sentiment, which underpins the safe-haven Swiss Franc and contributes drive selling in the pair. Hence, the market trading bias was being pressured by the fears of the steep rise in new coronavirus infections in Europe and the U.S.

Moreover, the risk-off market sentiment was further bolstered by the prevalent impasse over the next round of the U.S. fiscal stimulus measures, which further pessimism around the currency pair. On the flip side, the broad-based U.S. dollar weakness, triggered by doubts over the U.S. economic recovery, also played its major role in undermining the currency pair. At this particular time, the USD/CHF currency pair is currently trading at 0.9134 and consolidating in the range between 0.9130 – 0.9164.

The market risk tone has been shaky since the day started, possibly due to the worsening coronavirus (COVID-19) conditions in the U.K., Europe, and the U.S., which keeps fueling the worries over the global economic recovery. Meanwhile, the renewed conflict between the U.S. and China and the China-Australia tussle also exerted downside pressure on the market risk-tone and underpinned the safe-haven Swiss franc. As per the latest report, the daily new cases increased past Thursday’s record level of 6,638, with 7,334 new infections leading to 348,557 total numbers. The death toll seems to ease from the previous day’s 33 to 24 while marking a total of 9,734 deaths. As in result, the investors remained cautious that the rise in new coronavirus cases could lead to renewed lockdown measures.