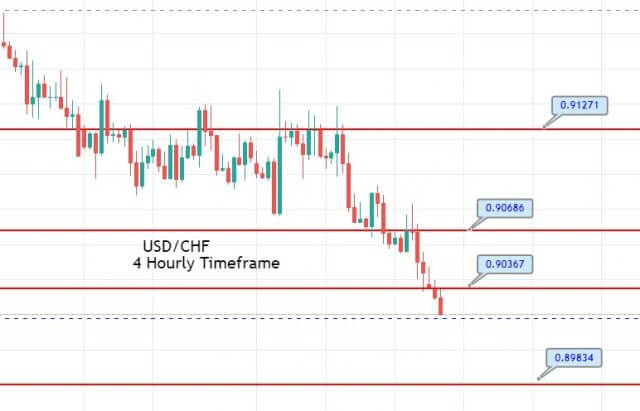 During Monday’s Asian trading hours, the USD/CHF currency pair failed to extend its last week winning streak and edged lower around the 0.9027 level. However, the bearish tone around the currency pair could be associated with the broad-based U.S. dollar weakness, triggered by the possibilities of further monetary easing by the U.S. Federal Reserve, which weakens the U.S. dollar and contributes to the currency pair losses. Moreover, the optimism over a potential vaccine for the highly dangerous coronavirus infection urges investors to retreat from the safe-haven asset, which also kept the U.S. dollar on the defensive and push the currency pair down. In that way, the COVID-19 vaccine optimism also weighed on the safe-haven CHF and became the key factor that helps the currency pair to limit its deeper losses. On the contrary, the on-going uncertainty over Brexit trade talks and fears of a full-fledged trade/political war between the West and China keep probing the upbeat market performance, which might push the currency pair further down. Currently, the USD/CHF currency pair is currently trading at 0.9029 and consolidating in the range between 0.9026 – 0.9047.

The prevalent optimism over a possible vaccine for the highly infectious coronavirus disease keeps providing a boost to the market risk tone. However, the hopes of the vaccine were boosted after pharmaceutical regulators from the U.S., Europe, and the U.K. showed readiness for approving the leading vaccines that have shown almost 90% effective rates during the final rates, which in turn, boosted the hopes of the early arrival of the much-awaited cure to the pandemic. Thus, the risk-on market mood tends to undermine the safe-haven Swiss franc, which becomes the key factor that lends some support to the currency pair to ease the intraday bearish pressure surrounding the USD/CHF currency pair.

The USD/CHF has violated the support level of 0.9036 level, and the closing of a candle below the 0.9036 level of 0.9036 can extend selling bias until the 0.8983 level. The MACD has crossed below 0 level suggesting odds of selling trend continuation. Thus, we have opened a sell trade; here is a trade plan below.