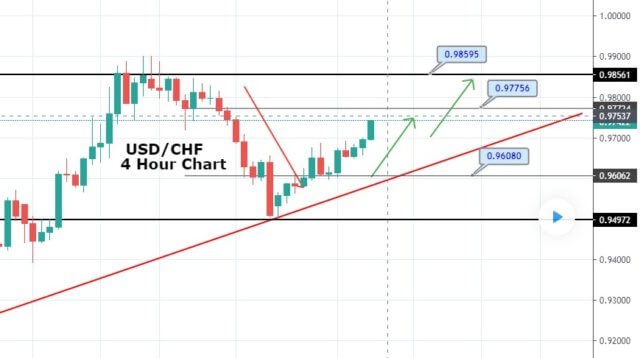 During the U.S. session, the USD/CHF pair is exhibiting some dramatic bullish movement as it’s prices are trading at 0.9745. What’s more surprising is, the U.S. unemployment claims figures are even worse than economists had expected, despite this, the U.S. dollar is gaining bullish momentum.

According to the U.S. labor market report, the week ending March 28, the advance numbers for initial jobless claims surged dramatically to 6,648,000, exhibiting an increase of 3,341,000 from the previous week’s updated level. This signifies the highest level of seasonally adjusted initial jobless claims in history. The prior week’s level was updated up by 24,000 from 3,283,000 to 3,307,000.

Since most of the data was already expected, considering the increased number of COVID 19 cases in the United States due to which the U.S. and people of other countries around the globe are locked down at homes. Despite this number, the U.S. dollar is making a bullish move, perhaps, it’s the technical analysis which is driving the buying trend in the USD/CHF.

On the 4 hour timeframe, the USD/CHF prices are holding around 0.9772, and bullish breakout of this level can extend buying until the next target level of 0.9856. Below this level, we can expect selling in the pair; in fact, I will try to capture the selling once the market reaches 0.9856. On the lower side, immediate support stays around 0.9606.