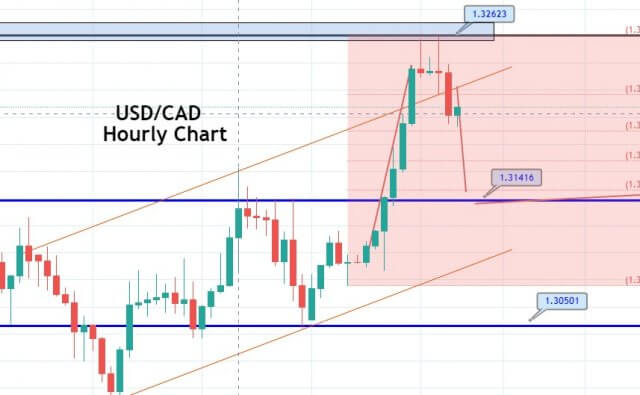 During Wednesday’s European trading session, the USD/CAD currency pair failed to extend its previous session bullish bias. They dropped from the 1.3257, the August 17 high to 1.3215 level mainly due to the cautious mood of the traders ahead of the Bank of Canada’s (BOC) monetary policy meeting, which is due to happen at 14:00 GMT.

On the contrary, the broad-based U.S. dollar bullish bias, strengthened by the market risk-off sentiment, turned out to be a top factor that caps further downside momentum for the currency pair. Across the ocean, the reason for the currency pair declining rally could be associated with the fresh upticks in the crude oil prices, which tend to underpin the commodity-linked currency the loonie, and becomes the key factors that kept the currency pair under pressure. At the moment, the USD/CAD currency pair is currently trading at 1.3224 and consolidating in the range between 1.3215 – 1.3260.

The long-lasting disappointment bolstered the risk-off market sentiment over the lack of progress in the much-awaited fiscal package. The U.S. Democratic Party leaders still have differences in package figures. Apart from this, the intensifying US-Chia tussle also kept the market trading sentiment under pressure. President US Trump recently gave the warning while hinting further punitive measures over the Chinese diplomats. He further added that we would take a tough stand against the Dragon Nation” if Trump is re-elected. However, the cautious mood around the equity markets underpinned the safe-haven U.S. dollar.

At the crude oil front, the crude oil prices have started to gains some positive traction during the European session mainly backed by the record supply cuts by the Organization of the Petroleum Exporting Countries and allies, known as OPEC+.

Looking forward, the market traders will keep their eyes on the Bank of Canada’s (BOC) monetary policy meeting, which is due to be released at 14:00 GMT. The risk catalyst like geopolitics and the virus woes, not to forget the Brexit, will also be key to watch for the fresh direction.


The USD/CAD has enrolled the overbought region at 1.3225 mark and has formed candles like Doji and Spinning top beneath the solid resistance mark of 1.3262 level. It appears like traders are getting ready to trade the Bank of Canada monetary policy outcome. Here’s a trade plan for today.