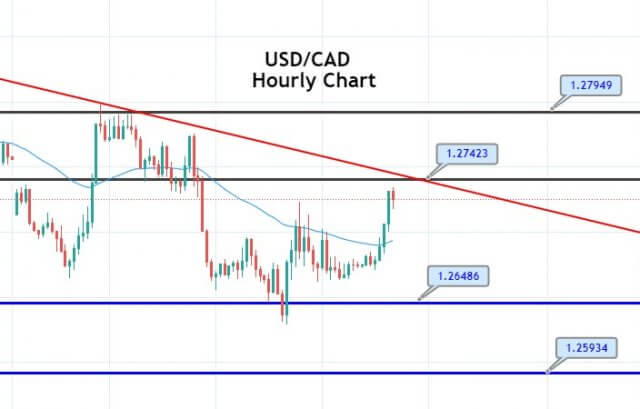 The USD/CAD pair was closed at 1.26766 after placing a high of 1.27234 and a low of 1.26297. Despite the continuous rise in crude oil prices, the USD/CAD pair posted gains on Wednesday amid the rebound in US dollar prices. After the two-day OPEC+ meeting, Saudi Arabia announced that they would be voluntarily cutting their output in February and March that will amount to 1 million barrels per day. West Texas Intermediate (WTI) ‘s barrel gained more than 5% and preserved its bullish momentum on Wednesday. The Crude oil prices reached $50.9 per barrel on Wednesday to their highest level in more than ten months and gave strength to commodity-linked Loonie that capped further upside in the currency pair USD/CAD pair.

The US Dollar recovered on Wednesday across the board amid the rising US treasury yields followed by the prospects of a Democratic win in US Senate elections. The US Treasury yield on a 10-year note raised more than 1% on Wednesday to its highest level since March and supported the recovery in the US dollar that ultimately added gains in the USD/CAD pair.

Meanwhile, the USD/CAD pair’s gains remained consolidated as the US dollar came under pressure after the prospects of a Democratic win in the US Senate elections increased. Wining the two seats in Senate by Democrats will give them control over both chambers of Congress that means they could get their agenda passed with the majority. The market participants kept betting over the prospects of larger stimulus measure after the victory of Democrats in runoff elections in Georgia and kept the US dollar under pressure that limited the gains in the USD/CAD pair on Wednesday. Market participants now await the release of meeting minutes from FOMC and the NFP report from the US that will release on Friday and Canada’s labor data.

The USD/CAD pair is trading with a bullish bias at the 1.2725 level, facing immediate resistance at the 1.2742 level. The USD/CAD pair may find resistance at the 1.2742 level on the hourly timeframe, and closing of a candle below this level may trigger selling until the 1.2640 level. The MACD and RSI are suggesting buying trends, along with 50 periods EMA. I will be looking to take a sell trade around the 1.2745 level today. Good luck!