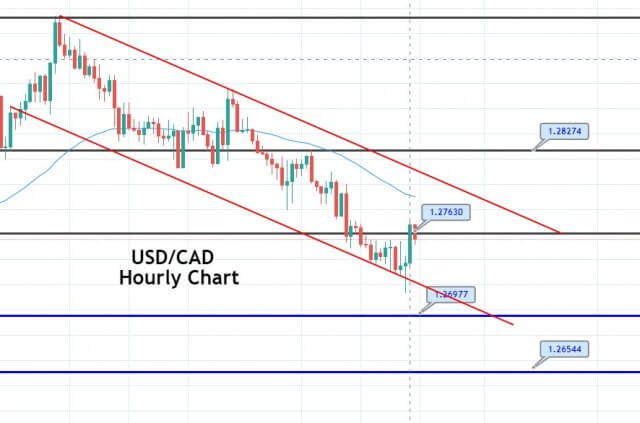 The USD/CAD pair was closed at 1.27513 after placing a high of 1.28269 and a low of 1.27493. The currency pair USD/CAD extended its losses on Wednesday for the 3rd consecutive day amid the US dollar’s weakness and rising crude oil prices. The bearish momentum surrounding the currency pair USD/CAD remained intact due to the unbeatable selling pressure around the greenback and a stronger Canadian dollar on the back of rising crude oil prices amid the improved risk sentiment in the market.

The rising optimism surrounding the vaccine rollouts after the UK regulatory approved the emergency use authorization of the vaccine prepared by AstraZeneca and Oxford University helped recover the market’s energy demand. The rising energy demand added to the crude oil prices that lift the per barrel price of West Texas Intermediate (WTI) to $48.63 on Wednesday.

Another reason behind the rising crude oil prices was the weekly report from EIA about the US crude oil stocks. At 20:30 GMT, the Crude Oil Inventories from last week were declined to -6.1M against the forecasted -3.0M and supported the crude oil prices. The surge in WTI prices gave strength to the commodity-linked currency Loonie that ultimately added losses in the USD/CAD pair on Wednesday.

Apart from Crude oil prices and macroeconomic data, the USD/CAD pair was dropped to its fresh weekly lowest level amid the US dollar’s weakness driven by the hopes that Senate will approve US stimulus checks to increase to $2000 from $600. These hopes dragged the US Dollar Index to its lowest level since April 2018 and reached below 89.52 level that added further losses in the USD/CAD pair.

The USD/CAD is trading bearish at the 1.2737 level, disrupting the support level of 1.2763. This same level is now working as resistance for USD/CAD. On the lower side, a continuation of a selling trend can extend a bearish move until the 1.2697 level. Since today is the last trading day of the year 2020, we are trying not to open unnecessary trades considering lack of volatility and trading volume. Let’s consider taking a sell trade below 1.2763 today. Good luck!