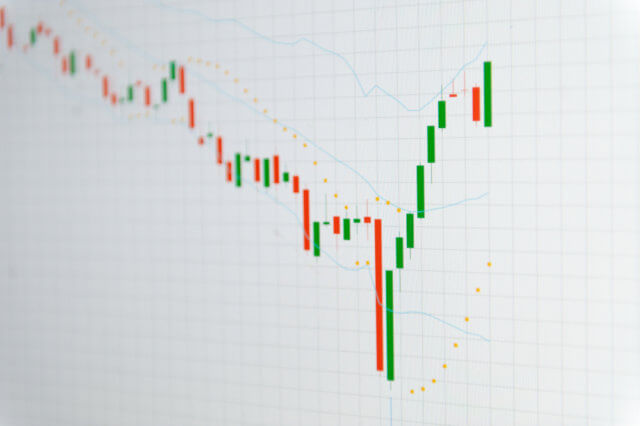 The Parabolic Stop and Reverse system was presented by Welles Wilder in his classic book New Concepts in Technical Trading in 1978, and he originally calls it The Parabolic Time/Price System.

This system sets stops at points that are closer and closer to the price action as time goes on. Mr. Wilder calls it “parabolic” by the fact that the pattern forms a kind of parabola when charted. The main idea is to give the market room at the beginning of the trade and, as price moves in our favor, gradually tighten the stops as a function of time and price.

If the stop is hit, the system reverses; therefore, Wilder named each point SAR: Stop and Reverse point.

The formula to compute it is: 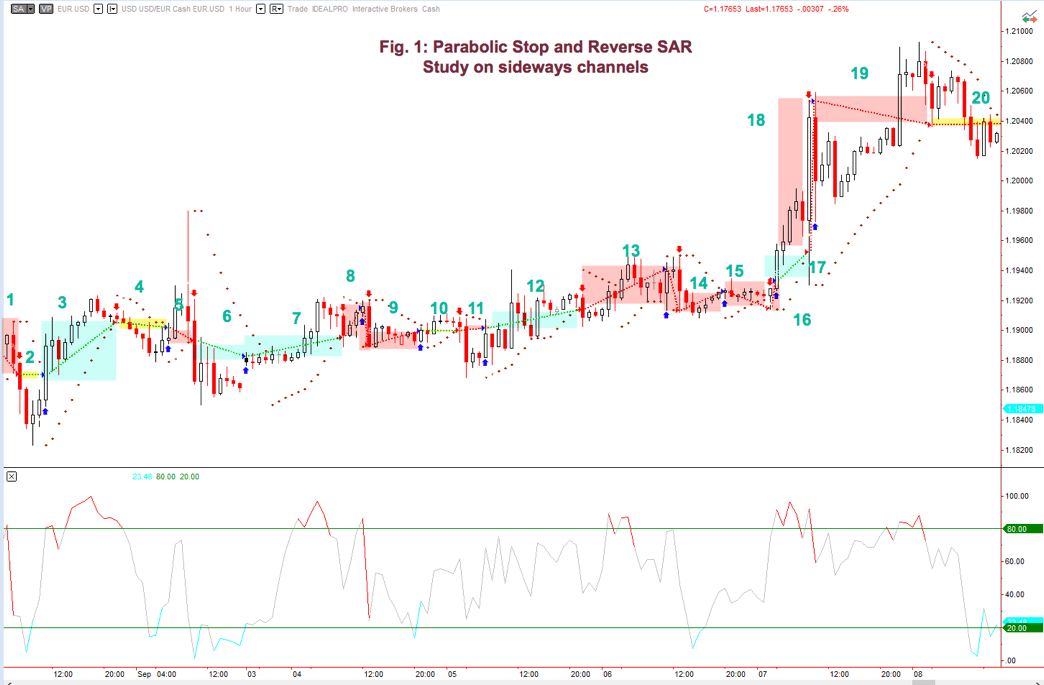 Fig 1: The magenta areas are winners, the yellow are break-even trades, and the pink regions are losers. As we might expect, in congestion areas, the SAR system is a loser.

PSAR as a naked system isn’t too good, since trades that go against the primary trend tends to fail, and almost all trades fail when the price is not trending. Sudden volatility peaks also fool the PSAR system. See Fig 1, point 18, where an unexpected downward peak reversed the trade in the wrong direction, cutting short a nice trade and transforming it into a big loser.

Fig 2a and 2b show the profit curve for longs and shorts in the EUR/USD 1H EURUSD 2017 chart. As expected, the long-trade graph presents more robustness than the short-trade curve, since the EURUSD had a clear upward trend back in 2017, whereas the short trades lost money. That is an example of how following the underlying trend grant traders an edge. 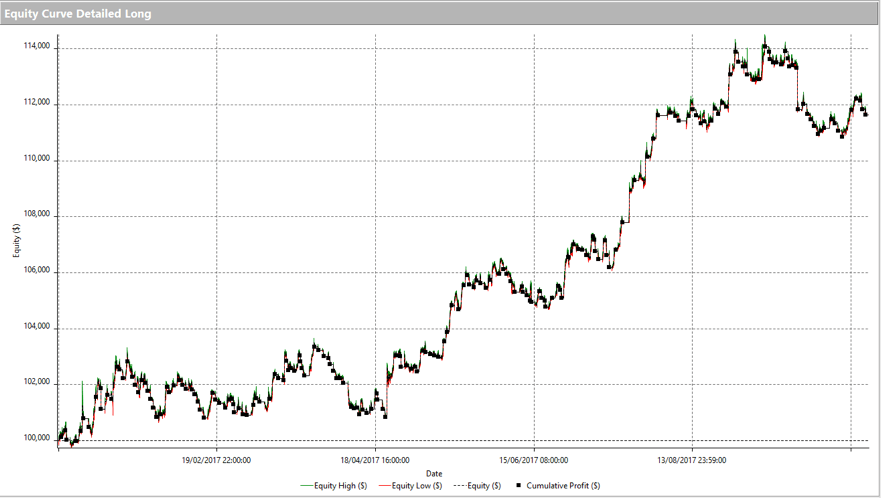 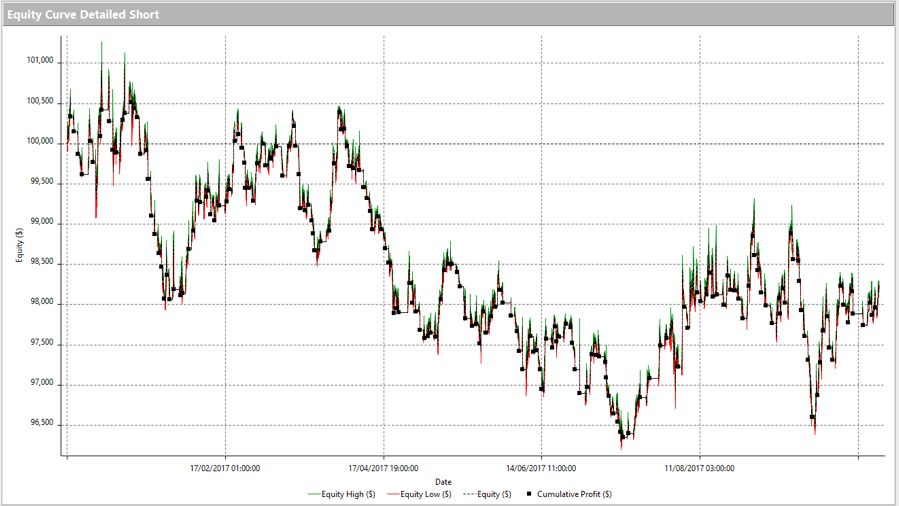 Anyway, it’s fantastic that using an entry system with absolutely no optimization could deliver such good results as the  PSAR system when taking only the trades that go with the primary trend. That shows, also, the power of a good trailing stop.

The naked system isn’t too good at optimizing profits, as well. A profit target makes it a lot better. Fig 3.a and Fig. 3.b shows the improvement after setting an optimal target for longs and shorts, especially relevant on shorts. 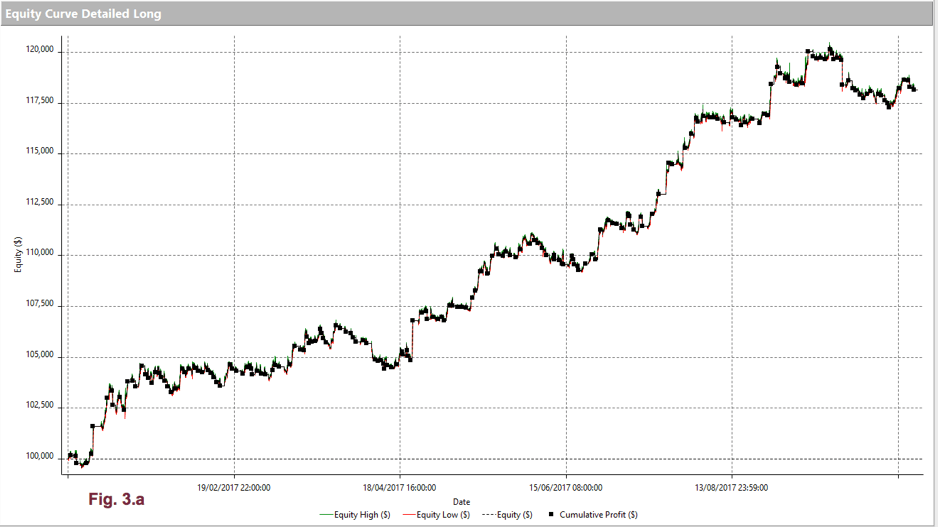 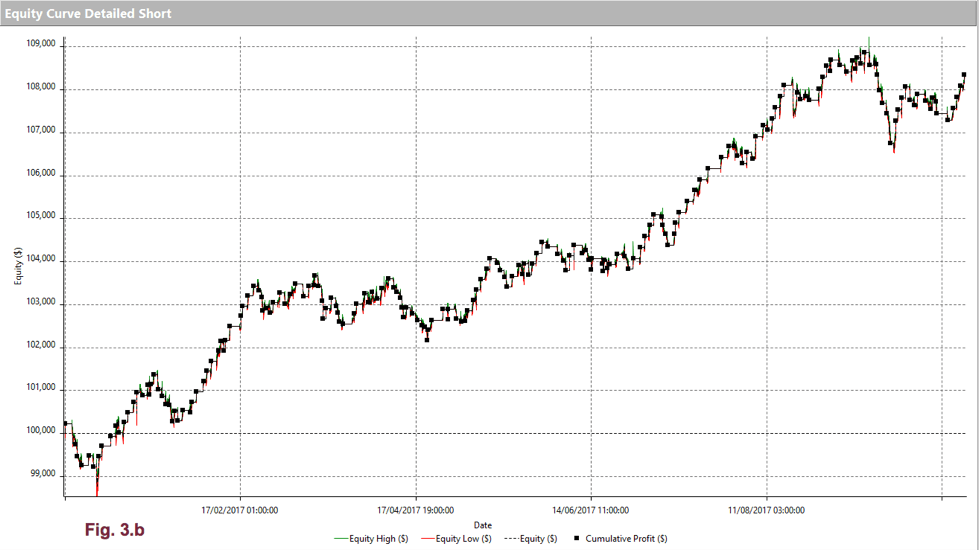 A small change in the AF parameter, lowering down to 0.18, to give profits more room run, and the use of profit targets, raised the percent profitable from 41.4% to 48.1. Max drawdown improved from -4.77% to -3.37%, as well, and the avg_win/avg_loss ratio went from 1.69 to 1.78. It seems not too much, but in combination with the increment in percent winners to 48.1% makes it an effective and robust system.

PSAR as a trailing stop

In this section, we’ll study the Parabolic Stop and (not) Reverse system, as it might be called, as the exit part of a trading system.

As an exercise, let’s consider a simple moving average crossover. We’ll use the same market segment that we used in the naked PSAR case. For longs, we’ll use an 8-15 SMA crossover, while, for shorts, a 7-23 SMA will be taken, as this arrangement creates optimal crossovers for the current market.

Figs. 4a and 4.b show the equity curve for longs and shorts, respectively, with a Simple Moving Average Crossover system, acting on its own. No PSAR stops added. 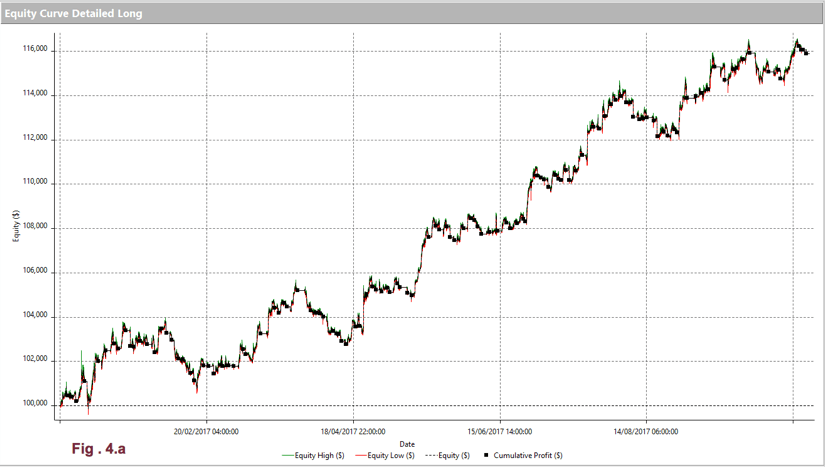 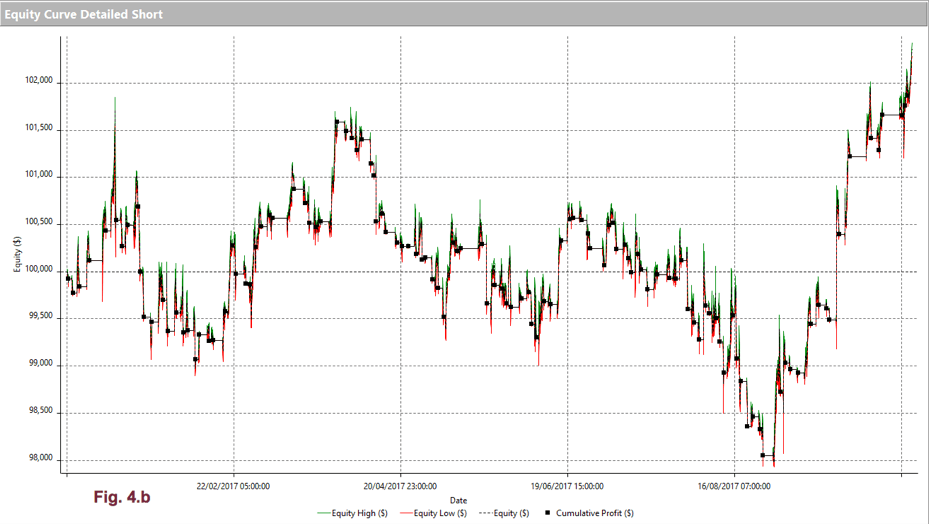 As we see in fig 4a, the long equity curve behaved much better than the short one, although that is due to the EUR/USD trending up. On the short side, even after optimizing its parameters, the crossover relationship is lousy.

Fig 5.a and 5.b show the effect of a PSAR trail stop. There’s almost no noticeable positive effect. The oddity that PSAR, as a system, is more profitable than when it acts as a trailing stop in another system is related to the entry signal. It’s evident that the SAR signal takes place earlier than the SMA crossover, so the PSAR stop isn’t able to extract profits when the entry signal lags its own signal. On the short side, if we take a closer look, we can see that it improves a bit the drawdown. 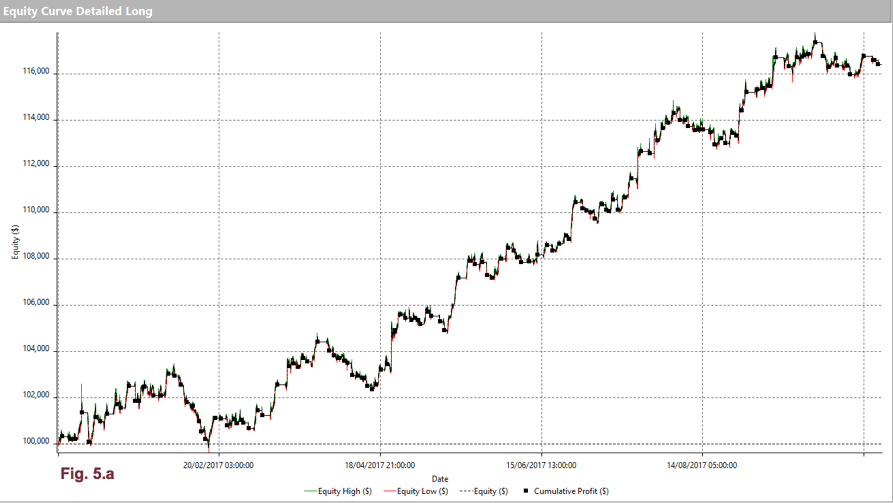 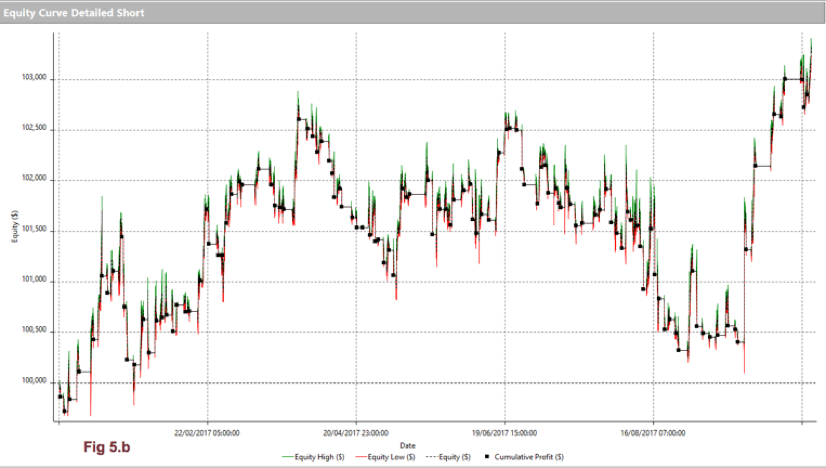 It may seem that the smart thing to do in a trending market such as the EUR/USD back in 2017 is NOT to trade the short side, at least not mechanically.

But, it’s impressive how take-profit targets help us extract profits and reduce risk when trading against the trend. Let’s see the equity curves using long and short targets: 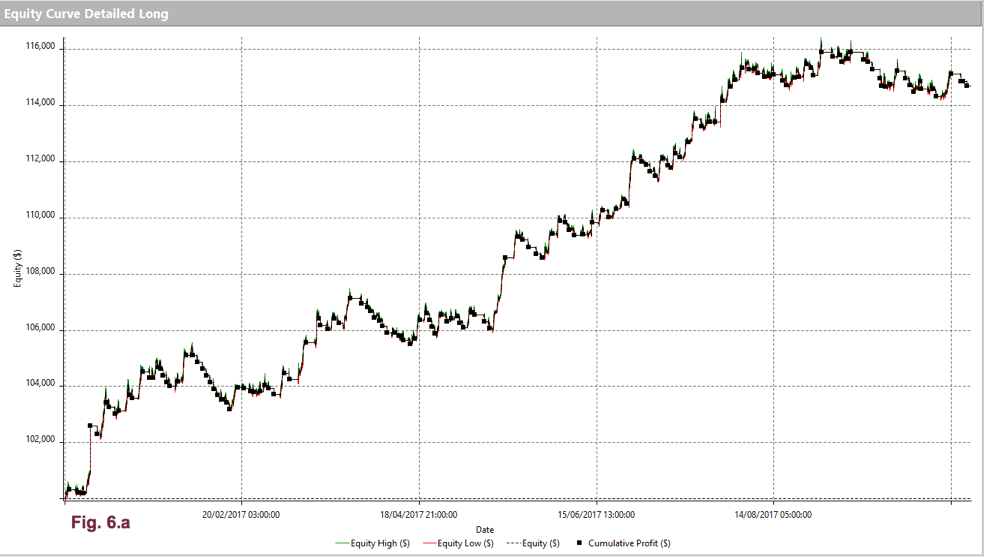 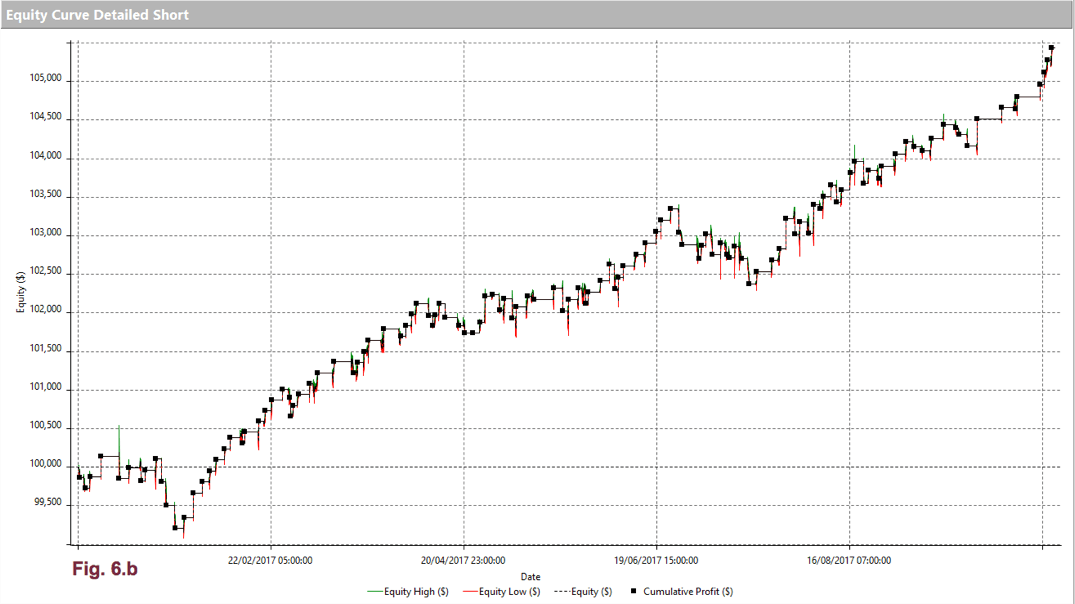 We observe that the long equity curve has a bit less drawdown, but, overall, it doesn’t change much. That was expected because the naked crossovers are very good at following a trend, so not very much can be gained using targets.

The use of profit targets is much more noticeable on the short side. It not only presents a higher final profit, but it’s drawdown practically disappeared, allowing us to better extract profits against the prevailing trend. We have to be cautious, though, if we detect a major trend change and adapt the targets accordingly.

Throughout this article, we tried to understand and analyze the PSAR as, both, an entry-exit system and its behavior as trailing stop to be used with other entry systems. We spotted its strengths and its weaknesses.

Given the results of our present study, we can conclude that:

The definition of the PSAR is taken from New Concepts in technical trading, Welles Wilder.

The studies presented were made using Multicharts 11 trading platform programming capabilities, and its results and graphs were taken from its System Performance Report.