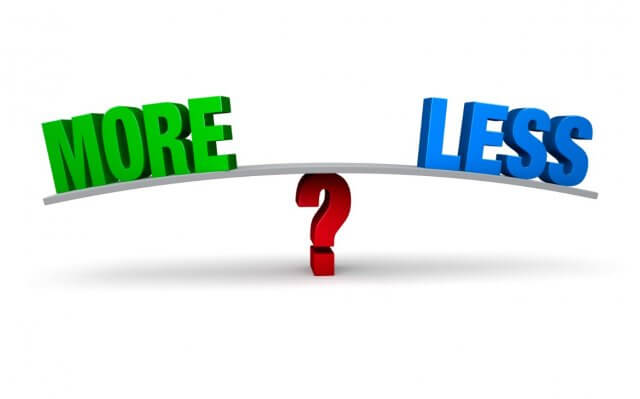 Some traders spend their entire day watching the market without a break. Others only make a few trades every week and don’t spend nearly as much time watching their computer screen. You may already have an idea of whether it is better to trade more often or less often, or you might be here because you’ve heard traders talk about both.

It is often said that trading less is better. Many traders might wonder how that can be true, considering that it would seem like more trading equals more money. One common argument that supports the less is more theory is as follows:

If you enter fewer positions each week or month, you’ll naturally put more thought into the trades that you take, thus increasing your win rate.

This would also decrease the chances that you could lose, although you would hope to win most of the trades that you do take. Another advantage to trading less often is that it is less time consuming and doesn’t require you to be constantly glued to your computer screen, although you do need to keep an eye on the market so that you know when to close your trades.

You also want to consider your trading strategy if you’re thinking of trading less often. While day traders typically open multiple positions per day, you might only want to open one or two trades a day or around 5 trades per week. Position trading and swing trading fit best with trading less often because traders open positions and leave them for days, weeks, months, or years in extreme cases, making these styles ideal for those that want to limit their trades.

On the other hand, some traders will argue that trading more often is better. Scalpers and day traders definitely come to mind here, as both trading styles involve opening multiple positions per day. On some days, a scalper might even open hundreds of positions in an attempt to profit from small price movements in the market. It could also be said that trading more could help reduce your losses, as you would have more chances to enter winning trades. Even if the market moved against you on some trades, there would likely be enough winning trades to keep you from going into negative territory.

The bottom line is that trading more or less often comes down to your trading style and personal preference. We won’t argue with the fact that trading less often makes it more likely for traders to put more detailed thought into their actions when it would be difficult to be as precise if you’re opening hundreds of positions per day. Yet a scalper or day trader would argue that there’s no way for them to make a profit without entering multiple positions per day. This is why it’s important to consider all of the pros and cons when it comes to this topic. In the end, only you can decide whether trading more or less often suits you better.