It is common knowledge that traders rely on indicators to trade in the fiat market and the fact that they are so widely used nowadays also goes along with the number of types and varieties of indicators traders have at their disposal. Among thousands of available options, some seem to have caught the attention of quite a few traders, and today we are going to dive into the topic of Moving Average Convergence/Divergence indicator, or MACD in short, which is a very common tool that forex traders use to follow trends, and learn the secret to earning a secure profit.

Generally praised for its diverse functions, this indicator may easily enchant you with what it offers. Nonetheless, as the existence of MACD’s different versions is often concealed, further obscured by the craze for its alleged abilities documented by various sources, we need to be careful not to get confused. This may, in fact, as well serve as good grounds for finally differentiating between quality and quantity, despite the indicator’s worldwide popularity. If we compare it to another tool we all know of, such as the Swiss army knife, we can immediately come to the conclusion that the bigger is not always the better. The parts that make this multi-tool simply do not reflect any fine quality and, what is more, they frequently fail to achieve their intended purpose, which in this case is to cut, open bottles, and file nails, among others. Compared to other single-purpose tools that efficiently and effectively fulfill these intentions, we cannot but recognize the correlations with the MACD indicator.

If you are wondering whether there is anything positive about this indicator, the answer is yes. As a matter of fact, although not all of its functions appear to serve a greater cause in this line of business, one of them is said to have rendered such a vast number of pips and provided many lucrative trades to various professional traders. However, before determining its most valuable sides, let us first propose a definition and classify it in terms of indicator types: MACD is essentially a two-line indicator based on the principle that once one line crosses the other, traders get the information to go either short or long. This tool is also known for its zero line, which sends out an important signal when the other lines cross over. Most people tend to use it because they can do reversals, which is unfortunately a major stumbling block in building one’s account as well as the opposite of using this indicator’s full potential. On the bright side, MACD also lets its users follow trends, helping traders to see which direction a trend will take. Regardless of this unique trait where both trend trading and reversal trading are made possible, there are still a few more questions requiring additional analysis.

One of the gray areas when it comes to using MACD certainly involves the question of whether this indicator uses a simple moving average (SMA) or an exponential moving average (EMA) for determining lines. Aside from the fact is that both of the two variations exist, traders can also use MT4’s MACD version presented in the image below, which a number of traders criticize for its impractical appearance. Again, traders across the world may have very distinct ideas of how this indicator looks like precisely because there are so many different variations out there. Considering the fact that MACD was initially developed in the 1970s for the purpose of trading stocks, this indicator’s original version cannot fully support the needs of the forex market. Nevertheless, some of the more recent variations were developed specifically for trading currencies, and, in the end, it is the traders’ choice which version they are going to use, be it is an SMA or an EMA one. 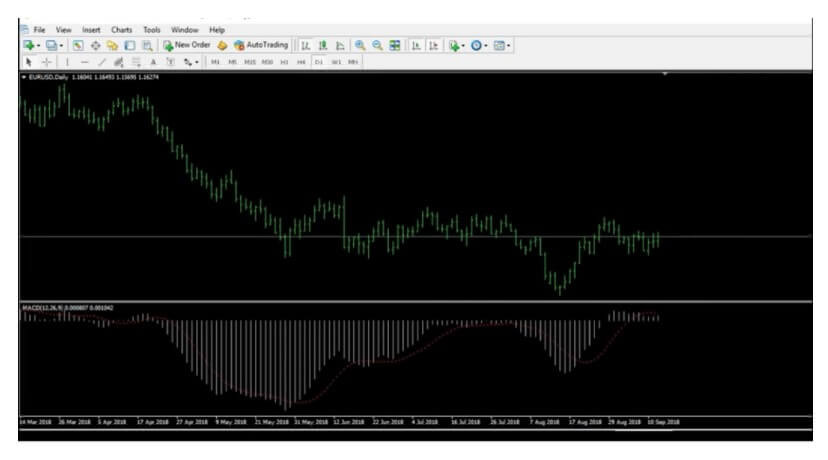 Another of the commonly asked questions revolves around histogram (the white vertical lines in the image below) that some professional traders consider as not very functional and useful. Although some traders may certainly make good use of it, histogram actually serves to indicate that the zero line has been crossed when it moves from the positive to the negative, something anyone can see by focusing on the place where the blue line crosses the red one (compare the yellow and the light blue rectangle in the following image). With the ability to remove histograms in some versions, it still does not seem to be the main reason why most traders use this indicator. 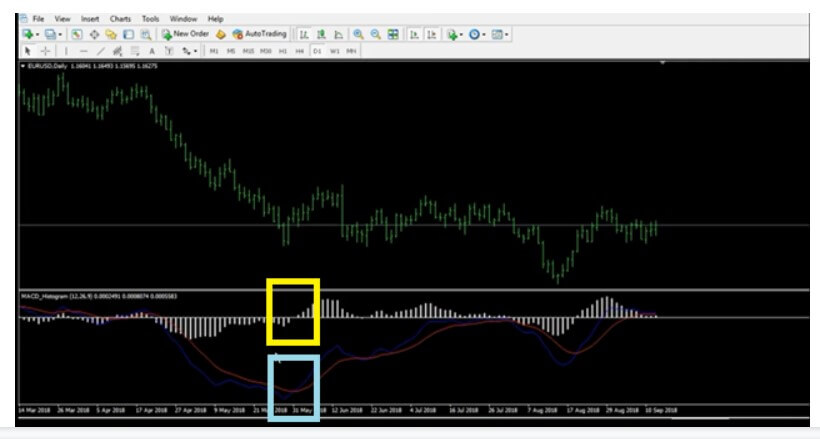 As we mentioned before, the preference of those using this indicator is to trade reversals rather than trends, which should not be your goal in trading currencies at all. Despite MACD’s ability to signal some very good trends when the zero line is crossed, we are safe to say that there may be some other apt indicators with the ability to provide equally, if not more, useful information. It is precisely the option to display both the two-line cross and the zero-line cross at the same time that traders should be interested in while searching for the right indicator. Bearing in mind the fact that there are quite a few of such tools similar to MACD, you should strive to find the one you would like to use because it will offer highly accurate signals and thus help you achieve substantial results.

While MACD can certainly offer this information where you can open continuation trades following the existing trend, you may be better off with some other indicator that can provide the same information. The main rule to follow with any such indicator is to have both lines above zero to be able to go long, ensuring that they have not crossed down at any point, with the opposite being true if you desire to go short. What this does is grants traders the luxury of actually following the existing trending, without the hustle of calling reversals and hoping to get a win somewhere down the line. This tool along with this piece of advice is what helped a number of professional traders become successful because this way you have a real chance to earn a profit. Finally, if you discover an indicator that comes close to your needs and preferences, you can always adjust the settings, rather than use the MACD indicator, and start making some of your biggest trades.