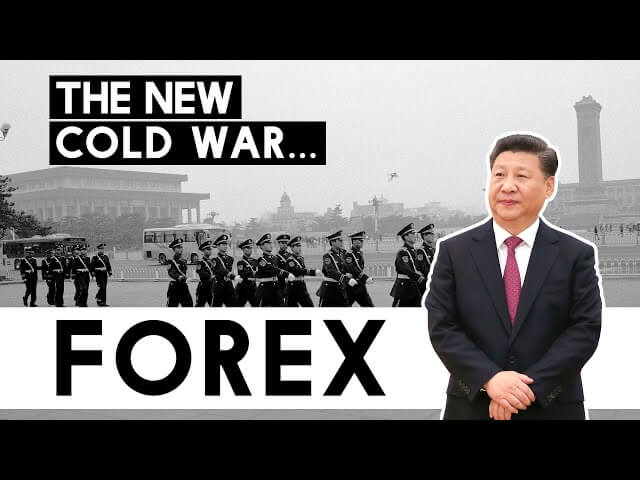 Thank you for joining this forex academy educational video. In this session, we will be looking at the escalating tensions between the United States and China.

If we believe everything that western media companies tell us about China and, in particular, regarding the Uyghur Muslims of Xinjiang province, we would have a right to be extremely concerned. Human rights advocates are calling it cultural genocide.
Max Blumenthal is an American investigative journalist for The Grayzone, and he believes that US corporate media and the US Government are deliberately sending out false news about China in order to disrupt China’s global rise to being a superpower and advancing the USA as the number one economic and military power. He calls the Executive Commission on China anti-china institutions, while Donald Trump refers to China as liars, thieves, and where he refers to the pandemic as the China virus.

Max reports that while at a meeting recently in Congress, Capitol Hill, he met Omer Kanat, who is the leader of the World Uyghur Congress, a multi-million US dollar dissident group, which is entirely funded by the US Government. They are primarily focused on regime change and are heavily responsible for providing the western media with reports about the Uyghur’s. Max immediately confronted Kanat about the story from 2018 about the concentration camps in Xinjiang, where millions of these Muslims were supposedly imprisoned. Kanat admitted that he was supplying western media sources with the information about these camps and human rights abuses. And Kanat told him that some stories were provided by other western media sources and some direct witness statements.
This feedback loop, as Max calls, it is the reason why the story is being fuelled by misinformation to portray China as a new Nazi Germany to the West.

Grayzone dug deeper and was only able to find two other sources to back up the concentration camp story: one was Adrian Zenz, an Evangelical fanatic, who, in his 2010 book, Worthy to escape. Zenz has declared he is on a mission from God to wipe out the Chinese Communist Party, which he views as a satanic entity. Zenz believes homosexuals are evil, and yet he has been called as a witness by some US media groups to provide evidence on the human rights abuses of millions of Uyghur Muslims in so-called concentration camps in Xinjiang province.
The other source Max found was the group Chinse Human Rights Defenders, which is a dissident group based in Washington and funded by the US Government. The group says it has testimony from only 8 Uyghur Muslims.
Max says there is simply not enough evidence to collaborate the stories of forced labour, human rights abuses, the extermination of Muslims and their culture, or even that these camps exist.

The Chinese Media Group CGTN, interviewed Gerry Grey, a duel English, Australian passport holder, and Ex UK police officer, with ten years of service, who has travelled extensively five times around China, much of it on his bicycle, since retiring in 2005. He travelled to Xinjiang by plane 2019 and said there were no restrictions there. He could hear the call to prayer 4/5 times per day and witnessed many mosques, something he saw all over China, with some towns having 3 / 4 mosques and where Wiki reports a total of 25,000 mosques in the region alone. He said he could hear the Uyghur’s language being used everywhere and that it was just not true that the Uyghur’s and indeed the Muslim way of life was being eradicated by the Chinese. What’s more, he could find no evidence of concentration camps while travelling freely in the province.
So, are we being fed the truth? The narrative is predominantly being driven by US media groups, and they are being led by the US government. And the flames are then being fuelled by other Western governments, including Great Brittan and many countries in Europe and Australia.

In fact, US officials have been flying around the world looking for support in the so-called fight for injustice and human rights abuses in Mainland China and Hong Kong since the New Security Bill was passed in June 2020.
So who is right and who is wrong? If you believe the above, then it is clearly evident that we are not being fed the correct information about Chinese Muslims and human rights abuses, and it would appear that misinformation and fake news is being used to try and destabilize the Chinese economy, possibly with the effect of slowing it down in order to maintain united states economic supremacy.

But what does this mean for us as traders; well, we are seeing extreme volatility in the markets every single day right now, and while much of this is due to the economic fallout from the pandemic, a great deal of this is because of the continuing spat between the United States and China, and where this looks to have no end in sight.

Therefore traders should be looking out for updates on the status between the relationship of these two powerhouses and expect more market volatility to come.