How to send and receive Bitcoin

Bitcoin is one of the biggest, if not the biggest financial innovation in this century. The technology behind Bitcoin has the potential to improve the world’s financial system as well as solve many problems. Some of the conveniences that Bitcoin offers are fast, cheap, safe, and secure transactions, all while removing third-party intermediaries and putting the power back in the hands of the people. Using Bitcoin, anyone can send value anywhere in the world in a blink of an eye.

However, as Bitcoin is still a new concept, many people do not know how to make a wallet, send or receive it. Hopefully, this article will help with that and make things easier to understand.

How to get a Bitcoin address

In order to get a Bitcoin address, you must create a Bitcoin wallet. Bitcoin wallets are, simply put, software used for sending, receiving, and keeping Bitcoin. Each wallet provides the user with a private and a public key. A public key is a way to confirm ownership of an account and of the address that sends and receives funds. A private key, on the other hand, is a “password” that signs transactions, and it is related to the public key.

A Bitcoin address is a version of a public key that acts as an “account number.” This Bitcoin address can be used by anybody to send Bitcoin to your wallet.
There are many wallets on the market, each bringing their own features. The two most important distinctions to make are:

Hardware wallets are a safer alternative to software wallets as there is an actual device that is used to store the wallet keys. This way, users are more secure as these devices are safer from security breaches that can happen to phone-app wallets or computer program wallets. They are a bit more costly, but anyone that has cryptocurrencies should be as safe as possible, no matter how much value the wallet holds.
On the other hand, paper wallets or “cold storage” wallets are a mechanism that stores Bitcoin offline. They are made by printing the private keys as well as Bitcoin addresses onto paper, making it impossible to hack. Physical wallets are considered the safest way to store Bitcoin.

Exchange wallets are wallets that let you keep, send, receive, and exchange funds on an exchange. This is considered the most unsafe way of storing Bitcoin (or any cryptocurrency) as the wallet keys are not in the hands of the end-user, rather in the hands of the exchange. Storing funds on an exchange is not advised, as it is far safer to store them anywhere else. Exchanges should only be used for trading and exchanging funds and not for simply storing cryptocurrencies, no matter how user-friendly it seems.

How to Receive Bitcoin

Once a wallet is created, receiving Bitcoin is fairly straightforward. Every wallet will have a receive tab where an address will be shown:

Using this address, anyone can send funds to the wallet. Wallets also provide their users with a QR code which can easily be scanned, which makes in-person transfers that much easier.
Once the sender puts in the receiving address and specifies the amount, the receiving account will be credited with the amount sent. It may take some time to confirm that transaction by the network.

How to Send Bitcoin

While all wallets are different, they all are pretty much alike when it comes to sending Bitcoin. Clicking on the “send” tab will lead the user to a page asking for a receiving address, amount of funds to send, and transaction fees. Not every wallet has the feature to let their users choose transaction fees themselves, but it is becoming a core feature in almost every wallet, so it is included in the guide. 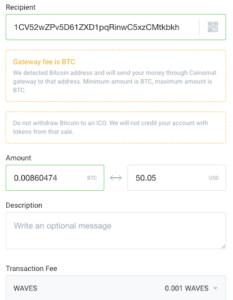 Once the recipient’s address has been put in, the sender should choose the amount that they wish to send, as well as transaction fees. Choosing a transaction fee comes down to the urgency of the transaction itself. If it needs to arrive as fast as possible, the user will choose a higher transaction fee, which will incentivize the miners to verify it faster. If time is not as important, users have the option to choose a lower-than-usual fee which will make transactions cheaper, but slower. Once everything is set, clicking the send button will finish the transaction.

Every wallet has its advantages and disadvantages, so it all comes down to personal preference. Choosing a wallet should be based on security, ease of use, and its other features. All of Bitcoin wallets can send and receive funds, so any wallet a user chooses will be a good choice (as long as the other features suit the needs of the user themselves).
As far as sending and receiving Bitcoin, it is (as proven above) extremely easy, which is one of many features Bitcoin has to offer. Hopefully, this guide will show people that they should not be afraid to step into the cryptocurrency world.