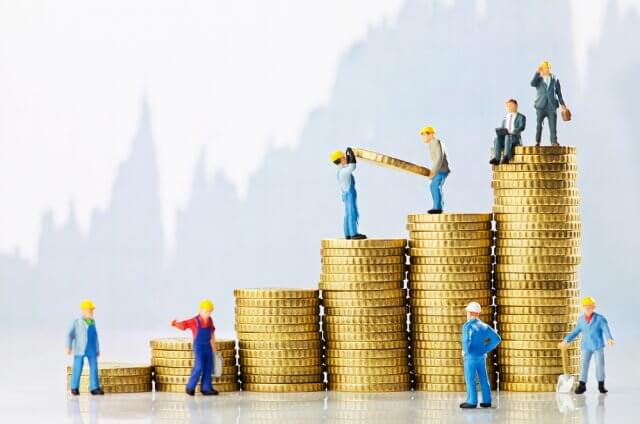 Wage Growth is an essential fundamental indicator that influences the GDP of a country, where the income of people of the country has a major say in the GDP calculation. So, even if Wage Growth does not directly affect the economy but shows its importance by affecting other economic indicators. In today’s article, we will understand how Wage Growth is measured and how it impacts the value of a currency indirectly.

What is Wage Growth?

Wage Growth is referred to the rise in wages of employees that is inflation-adjusted and is often expressed in percentage. It is a macroeconomic concept that determines the economic growth of a country in the longer-term, as it reflects the purchasing power of people in the economy and the living standards. A high wage growth implies price inflation in the economy, and low wage growth indicates deflation. A low wage growth scenario requires intervention from government agencies such as the Reserve Bank, which will stimulate the economy through changes in the fiscal policy.

One of the important ways of maximizing wage growth is through the re-skilling process and investing in the development of the skills of employees. When skilled workers are involved in the decision-making process, it leads to the growth of business and industry as a whole. Hence, more financial compensation can be given for skilled workers who not only lift wage growth but also stimulate competitiveness in the economy. This leads to higher productivity and, thus, GDP per worker.

The key drivers of Wage Growth are productivity and inflation expectations. Wage Growth that is relative to the increase in prices of commodities in the economy—also known as real wage growth—reflects labor productivity growth as well. However, there are several other factors in a business cycle that results in wage growth diverging from production growth.

There are two different ways of measuring real wages. One is from the producer perspective, while the other is from the consumer perspective. Producers fix their labor costs by calculating them relative to the price of their outputs. Consumers measure wage growth by comparing their income with the cost of goods and services they purchase. Thus, most countries examine real wage growth by adjusting it with the rate of inflation. In Australia, for example, real wage growth is determined by considering three parameters, including inflation, hourly wages, and the average number of working hours.

Today, wage payment is a crucial factor in influencing labor and management relations. Workers are worried about the annual rise in their wages as it affects their standard of living and purchasing power. Managements in some companies are not concerned about higher wages to their employees as they feel the cost of production will go up and their profits will decrease. Let us see some other factors that affect wage growth.

The labor market operates on the forces of demand and supply. When demand for a particular type of skilled workers is more, and there is less number of people skilled in that job, the wage growth rate will be high.

In countries where the wages are very low, the government may pass legislation for fixing the minimum wages of workers. This will also ensure a minimum level of living. This is especially the case in underdeveloped countries where the bargaining power of laborers is weak.

Before handing over the projects to employees, it is necessary to train them enough, so they are capable of doing the job with high skill. This process usually takes time and money, which the company has to bear. Hence this has an effect on the annual growth in wages of employees.

The Wage Growth Rate Reports are released annually and on a quarterly basis that covers the review of the data from the previous quarter to the current quarter. All the major economies of the world and some developing countries publish this data on a quarterly and yearly basis that money managers use for evaluating various performance metrics.

The Economic Data of Wage Growth is a major determiner of the GDP of a country and, thus, the economy. The GDP, as we know, is a key measure in determining the strength of a country’s economy and, thereby, the value of the currency. By comparing the year on year wage growth, we can predict the growth of the economy and improvements in the standard of living. One can also compare the Data of two countries and analyze why the country with higher Wage Growth has been able to achieve it. The monetary committee can note down the differences in the policies.

There is an indirect relation between Wage Growth and the value of a currency. When we see a growth in the wages of workers, this is said to increase industrial growth and overall productivity, which in turn improve the GDP of the country. Higher levels of GDP will generate a higher demand for the currency and will increase the economic activity of the country. However, when wages are stagnant and do not show any rise, this will decrease consumer spending and leads to lower living standards. Due to this, the GDP will be affected and will drive the currency lower.

Most countries release Wage Growth data on a quarterly and yearly basis, and countries like the United States and Australia provide a detailed analysis of the same. The reports are published by the respective governments on their ‘Treasury’ website, which includes the International comparison of wage growth rates, Trends in wage growth, and more.

The growth in demand for goods and services depends on the spending power and the income that flows to the population, a significant portion of which comes from wages. Companies and government need to understand that growth in wages is not just a cost of production but are also a source of spending and thus of revenue and profit for the business.

Impact of the ‘Wage Growth’ news release on the price charts

After understanding the significance of Wage Growth in an economy, we shall extend our discussion and find out the impact of Wage Growth data on currency pairs. From the below image, we can infer that the Wage Growth may not cause a drastic change in volatility of a forex pair as the level of importance assigned to it is very low. Wage Growth numbers are announced on both a monthly and yearly basis, but to estimate the degree of change in volatility, we will be analyzing the year-on-year numbers of the same. A reference currency that we have chosen for this purpose is the Russian Ruble (RUB).

Below is an image showing the latest, estimated, and previous Wage Growth data of Russia, where we see that there has been a decrease in Wages by 0.4% from the previous year. A higher reading than before is said to be positive for the currency while a lower than before data can negatively impact the currency. The Wage Growth data is officially released by the ‘Russian Federation Federal State,’ which is responsible for maintaining the fundamental information of Russia. Since the impact of the Wage Growth news announcement is least, let us look at the reaction of the market.

We shall first look at the USD/RUB currency pair and analyze the impact of Wage Growth on this pair. In the above chart, we see that the market is a strong downtrend and recently we see a retracement from the lowest point. Since economists have forecasted a much lower wage growth than before, it is not prudent to take ‘long’ positions in the market as, technically speaking, this would mean we are trading against the trend. Therefore, a risk-free approach would be to wait for the news announcement and then trade based on the change in volatility.

The above chart shows the market reaction to the Wage Growth news announcement where the data came was beyond expectations and mildly lower than the previous year’s numbers. Since the data was robust, the price goes down, and the Russian Ruble strengthens. As the difference between the forecasted to actual data was huge, the volatility increases a lot on the downside, and the market seems to continue its downtrend. After the clarification of Wage Growth data and confirmation signs from the market, we can enter the market by ‘shorting’ the currency pair with a stop loss above the ‘news candle.’

The above images represent the EUR/RUB currency pair, which is similar to that of the USD/RUB pair in terms of price behavior. However, the downtrend here is more resilient and stronger than in the above pair. The pullback, too, has been very little, which shows the strength of the Russian Ruble. Therefore, an above-average Wage Growth data should take the currency much lower while below-average data can result in a rally for a small duration of time, but not a trend reversal.

After the news announcement, we see that the price falls and leaves a wick on the bottom. This wick is due to the reaction at the support area, but this shouldn’t scare us, and we can confidently take ‘short’ positions in the market with a compulsory stop loss.

The above charts are that of the GBP/RUB currency pair, where we see that the characteristics of this pair are totally opposite to that of the above-discussed pairs. Before the news release, we witness a strong uptrend, and the price is currently at a resistance area. We have two options at this point in time, one, to ‘long’ in the market as Wage Growth data is expected to be very bad and second, to wait for the news announcement, and if the numbers are weak, go ‘short’ in the market.

After the release of Wage Growth data, the price initially goes down as the numbers were better than expectations, but later, the candle closes in green. The volatility increases on both sides, but the numbers were not good enough to strengthen the Russian Ruble. Therefore, the only way to trade this pair is to wait for a breakout above the resistance area and then trade the retracement of it -using the Fibonacci tool.

That’s about ‘Wage Growth’ and its impact on the Forex market after its news release. In case of any queries, let us know in the comments below. Good luck!