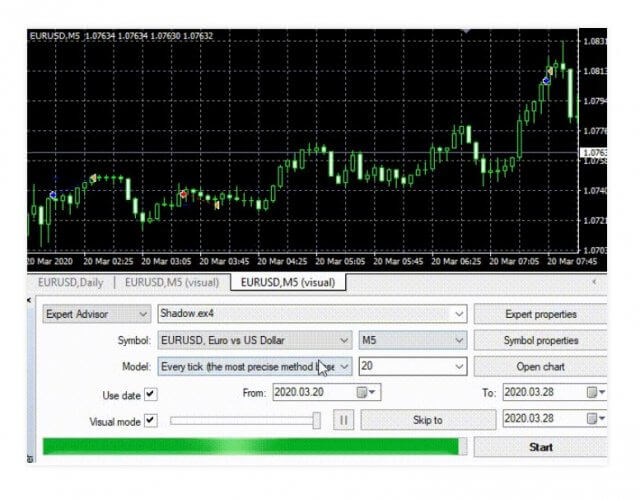 ShadoW FXUG is a newly developed Expert Advisor made for the MetaTrader 4 platform that belongs to a specific candle pattern recognition strategy. It is developed by Volha Loyeva from Belarus, a seller on the MQL5 market without any particularly noted product out of 9 published. There are no details about the EA strategy on the Overview page and the content is not very useful for the trader. The initial 1.0 version was released on the 30th of March 2020 and it does not have any updates yet.

It Is stated that the EA does not use the Martingale, Grid, locks, and other methods considered risky. However, we have noticed that Averaging is used in a classic way. Traders that do not follow the pattern category strategies and avoid Averaging should look for other automated solutions. The system has a loss protection module comprised of non-fixed Stop Loss orders. ShadoW FXUG is not a scalper although it has similarities, especially if we take a look into the performance chart figures.

The EA is presented with catchy marketing phrases, such as “shadowed by developers, modified by developers.” And almost nothing about how the EA works. The core of the strategy is the pattern analysis of candles and wicks. The wicks are factored in pure pattern strategies but it is also a measure of volatility and buying or selling pressure. We are unsure if the EA is using these factors for trading although the Stop Loss feature is presented as dynamic or adaptive to market conditions. EUR/USD it the only currency pair optimal, on the M5 timeframe. Now, M5 is considered a fast timeframe used by traders who follow scalping or other fast trading ideas that do not hold positions for long.

According to the features list, ShadoW FXUG is short to a mid-term proposition, closing all trades before the next day, thus avoiding the swaps. Only one trade will be opened for a single signal and all orders have a Take Profit and Stop Loss orders. Take Profit is not placed far ahead, most of the orders are closed this way, meaning the real exit indicator or a signal is non-existent. By default settings and according to the backtesting screenshots, the EA will trade about 15 trades per month. 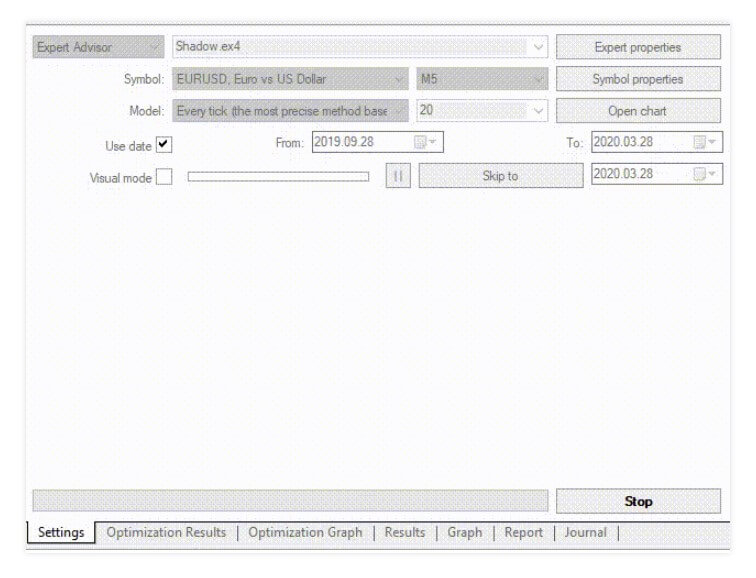 If you want to have more aggressive trading, you will be able to turn off the filter changing the BodyLength parameter in the settings panel. Also, it is stated the EA is not dependant on the spread value which makes us wonder how can short term positions be mostly unaffected by the spread.

Interestingly, the small number of settings options are considered as a feature by the developer. In the settings panel, you will see only 10 parameters. The Timeframe parameter is not meant to be changed and therefore is locked. Trades can change the KProfit variable, which determines where the Take Profit will be placed, although it remains a ratio against unknown value. Wicks obviously play a role in the analysis and you can change the “size” of it in the MP variable. Averaging is used but can be adjusted with the HP parameter but traders will have to see how different is the EA Risk Management with bigger or lower values.

The TwoOrders parameter is for allowing the EA to open more trades than just one. This could be also used instead of turning off the BodyLenght filter mentioned above. Trade size allocation can be done with the FixLot or DynamicLot parameters, depending on how you want to manage the exposure for each trade. It is not known what is the base for measuring the market dynamics. The last option is the Max Spread where you can set the point value of the spread above which the EA will not open a position. 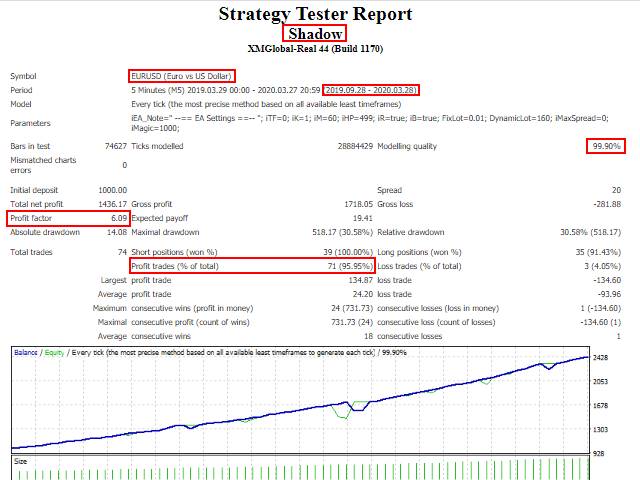 The performance chart screenshot shows backtesting dome in MT4 Strategy Tester for the 6 months ending in 2020. It is done with the BodyLenght filter on, on the EUR/USD and M5 timeframe using the Every Tick modeling (99.90% accuracy). Certainly, the success rate is almost perfect, 95.95%, that could be contributed to close Take Profit levels. Boosting the success rate does not mean the EA is successful in other aspects, the average profit trade is 24.20 versus -93.96 loss trade. This means if the market conditions change for a certain period to which the EA is not optimized, one could lose the entire account with a few losing trades. The average winning streak is 18 to just one loss, which means the EA is profitable with a profit factor of 6.09. Based on 1000 deposit, the EA made 1436 net profit. The final important figure is the drawdown of 30.58%, pointing to a somewhat risky strategy, especially concerning Averaging is used.

ShadoW FXUG price is $999 and this could be a decisive factor why this EA does not have any reviews or comments form the MQL5 community. Traders who purchase the product will have 10 activations on different computers. A demo version is available and has been downloaded 26 times for about 1 month. There are no renting options, an unusual proposition concerning the price is in the higher range.

The developer is updating new settings files and uploads them in the comments section along with the promotions by the FX Urban Group, the developer team behind ShadoW FXUG. Note that there a few products form this group offered for free, and ShadoW FXUG is their most expensive product. It is still new but it does not have the values or figures needed to rise in popularity in our opinion. Whatsmore, the presentation is not good enough and there is no signal service to back up the EA with forwarding, live performance.

This Forex service can be found at the following web address: https://www.mql5.com/en/market/product/47795