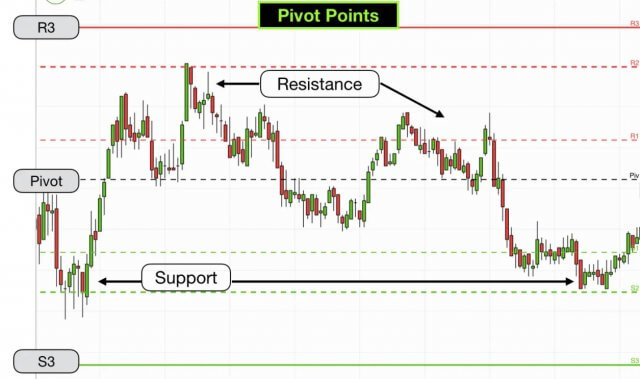 When you study Forex trading you may have discovered the term, pivot points. This is a collection of supports and resistors that are previously calculated to give you ideas about where to buy and sell a couple of currencies. Pivot points are not just used in Forex and in fact, have a history in futures exchanges in the United States. This brings us to the days of voice trading and before computers existed.

Unlike many other indicators you might find, pivot points are, because of their nature, predictable. Essentially, what you’re doing is seeing where the overall pivot in the market can be, and then the next three levels of support and the three levels of resistance. This indicator is quite powerful, but the same as other indicators, it must be confirmed either by the action of prices or other factors such as the previous support level.

The analysis of pivot points focuses on the relationship between the maximum point, the minimum, and the starting prices between each day of operation. In other words, the prices of the previous day are used to calculate the pivot point of the current day. The pivot point, the central axis of the indicator, is considered as “fair value” for the market. Remember, if the price is rising and is returned, it is said to have resisted. Alternatively, if the price is falling and is returned, it is said to have found support. This indicator will show what is the “fair value” of the market, and three potential areas in both directions, which are called support one, support two, support three and also resistance one, resistance two, and resistance three to make the role of guidelines.

The other pivot points can be calculated as follows:

One of the main reasons why traders use pivot points is that they work statistically. For example, the EUR/USD pair has given results below support 1 almost 44% of the time. The maximum of the day has been over Resistance 1 almost 42% of the time, while the minimum has been under Support 2 17% of the time. Continuing with this, resistance 2 has been exceeded by day maxima only 17% of the time, while minima and maxima exceeding or being below support 3 and resistance 3 only occurs 3% of the time. Because of this, you may perceive how likely it is that the price will go to any of those areas. Think of it as a Gauss bell, and the standard deviation equations you learned in school. When you are beyond two standard deviations it is very rare to stay there, you can think about our three and support 3 in the same way.

Think about it this way; if the resistance level 1 is only exceeded 42% of the time, in this way that means that if you are on the market for a short term, the odds are in your favor if you put the loss cut over the resistance 1. Obviously, there are many possible combinations here. Luckily, most trading platforms now include pivot points, so you won’t need to know how to calculate them.

An Example in Action

Have a look at any graph of the AUD/USD pair with an hourly timeframe that has the pivot point indicator built-in. At this point, I would like to point out that not all Metatrader platforms come with it, but there are free downloads available online on a multitude of schemes. In this particular situation, the pivot point of the previous day is the yellow line while the support levels are blue and the resistance levels are red. As you look at this chart, notice that the market started the day at a point much lower than the pivot. The central pivot line, the yellow one, should be considered as a potential “fair value” for the market. Instead of starting there, we started at $1, and we started seeing support. You can clearly see that initially, we moved towards the pivot point but then you overcame it. You’ll notice we stopped at Resistance 1, which is where we closed the day.

You can see the importance of those levels in this table because even when they are surpassed the next level will begin to show its influence. What I have not pointed out in this graph is that the central pivot is at the level of 0.73, an area that has been in support and resistance more than once. It is therefore not a great surprise to see that the market suddenly closed at that level and did not deviate from it. If you decided to stay in the market above $1 you would probably have made a profit near the pivot point. Beyond that, if we deviate outward as it happened, then I could well see the area below the pivot point to put a stop loss. While it is not itself a trading system, the pivot points are based on statistical probability, something on which much quantitative trading is based. Keep in mind that many machines sell and buy currencies today, so those ratios and formulas can be relevant. Then using pivot points and Forex trading you add some quantitative trading to your strategy.

Pivot points are typically used for short-term trading, however, there are pivot points that are used in monthly installments in the same way. When calculating these, simply replace the maximum, the minimum, closing values of the previous sessions with one of the previous month. It works the same way, any time frame. 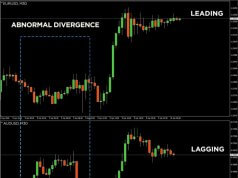 The Ultimate Guide To Correlations: From Basics to Opinions