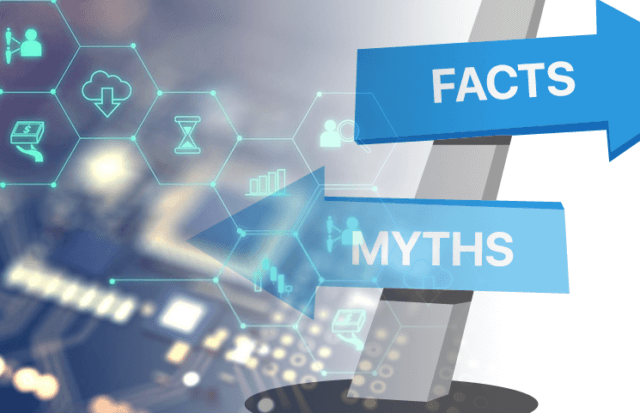 If there’s one space that’s rife with confusion, myths, untruths, and rumors, it’s the blockchain and crypto space. That’s because both technologies are still relatively young, and cryptocurrencies, in particular, confounds many with their explosive success and tenacity when many thought they were passing smoke.

Blockchain, on its part, has been touted as the panacea of many ills faced by the finance industry and businesses. Also, you’ll rarely hear its weaknesses mentioned, just the pros.

What are the facts, and what is fiction? Whether you’re an investor, an aspiring investor, or just watching from the sidelines, it’s important that you have a clear and realistic view of these technologies.

This piece debunks the most common myths about blockchain and cryptocurrencies.

Bitcoin is the first and most popular blockchain application. As such, many people confuse it with Bitcoin. Bitcoin is a cryptocurrency – the first-ever, introduced in 2009. It facilitates transactions in a peer-to-peer and decentralized environment. Transactions on the Bitcoin network do not need approval or supervision by a third party. Blockchain, on the other hand, is a distributed ledger that is stored in a cluster of computers. Blockchain records are secured by the use of cryptography.

2. Blockchain’s Only Application Is Cryptocurrency

It’s true that cryptocurrencies are the widest application of blockchain technology.  It’s also true that the two go together very well. But cryptocurrency is not the only use case for blockchain. Lots more industries can use blockchain and take advantage of its security, transparency, immutability, and so on.

Lots of crypto users are under the impression that crypto transactions are anonymous.  In actual sense, transactions on public blockchains such as Bitcoin are recorded on the blockchain and can be traced to the owner. While your personally identifying credentials will not be published on the blockchain, your public address will.  Also, crypto exchanges are mandated by governments to identify users on their platform.

4. Blockchain Will Overhaul How Business Transactions Are Done

Blockchain is often touted as the technology that will change how businesses conduct, record, and manage transactions. But in some instances, blockchain might be more process-intensive, difficult to scale, and take more confirmation time than current methods. Blockchain is only necessary if there is a need for ultra-secure verification and immutability of records.

5. Cryptocurrencies are Volatile, So Blockchain Cannot Be Reliable

6. Cryptocurrencies Are Best For Illegal Activity

Cryptocurrencies have two special features, decentralization and privacy. These are very attractive features for criminals.  But they are also attractive features for law-abiding people who wish to invest in them, and citizens of politically or economically unstable countries. If your country’s economy has the possibility of destabilizing or your assets are at the risk of being frozen by a tyrannical government, cryptocurrencies might come as a very handy choice.

7. Blockchain Technology Can Be the Backbone of a Global Economy

No entity, either private or public, owns or regulates the blockchain. For this reason, Bitcoin proponents hope private blockchains can support cryptocurrencies for varied use across sectors. The reality is that current blockchains are still too small to support a global scale of financial operations.

Many people still use these terms interchangeably.  But the two are fundamentally different concepts. Digital coins have only one utility. They also act as a store of value, much like fiat, and are also used to access the services of a blockchain. Examples are Bitcoin and Ether for the Bitcoin and Ethereum blockchains, respectively.

Tokens, for their part, store complex kinds of value such as property, stock, art, utility, and so on. In other words, they represent ownership of real-life assets. Tokens are hosted by a blockchain such as Ethereum and are issued via an Initial Coin Offering (ICO).

9. There Is Only One Type of Blockchain

Many non-blockchain insiders think that there is only one type of blockchain.  In truth, there are three types of blockchain:

Public blockchains: these are open-source blockchains on which anyone anywhere can participate.  Anyone can read, write, audit, or review anything on the blockchain.

Private blockchains:  these blockchains are only accessible to participants who have been authorized to do so. Also, only authorized people can record transactions.

Consortium blockchains: These are blockchains that are governed by a group of companies – usually in the same industry – who come together to share insights and make decisions that benefit them and industry.

10. Blockchain Records Are Immune to Hacking or Alteration

One of blockchain’s main selling points is its immutability of records and its unimpeachable security. Many people often think this means blockchains are utterly insecure from attacks. But no system can be 100% tamper-proof or secure. In the case of blockchain, the more distributed it is, the most secure it is considered to be. This is because its distribution eliminates a single point of failure in the sense that even if one node fails, other nodes will continue running the network.

Also, blockchains are vulnerable to bugs in the code, loopholes in smart contracts, and other ways through which bad actors can exploit them.

11. Blockchain Technology Is Only Applicable In Finance

This misconception arises from the fact that blockchain was first applied to cryptocurrencies – which are in the finance sphere and which have impacted it directly. However, blockchain has numerous other applications.  It can be used in real estate, supply chain, healthcare, identity, music, and many other areas.

One of the most bandied-about words in the blockchain space is ‘trustless.’  The truth is that even blockchain requires a degree of trust. Blockchain does not completely eliminate the need for trust; it only reduces it. A certain degree of trust is placed on the underlying cryptography of public blockchains, as it is placed in the validators of permissioned ones. Blockchain, at best, is ‘trust-minimizing.’

13. Blockchain Is a ‘Truth Machine’

Blockchain is very good for transferring data that is native to the respective blockchain.  However, for non-native data, “garbage in garbage out” still applies to blockchain. This is because blockchain cannot determine whether data from external sources is accurate or not. If such data is inaccurate, blockchain will just treat it as it would any other input, after certain conditions are met.

14. Cryptocurrencies Are A Quick Route to Riches

There is a persistent idea that cryptocurrencies can make you rich overnight. Indeed, early crypto investors made huge gains in the most the bullish year 2017. But we’re yet to see another bullish year such as 2017, and with the hard-to-predict nature of cryptocurrencies, it’s hard to know when another crypto boom will occur.

Cryptocurrencies are certainly thrilling to invest in, but they are not a one-way ticket to riches and glory. As with any investment, it’s prudent you do your research before investing, as well as diversify your investment portfolio across different assets to spread risk.

15. Cryptocurrencies Do Not Have Value

Several factors have contributed to the notion that cryptocurrencies do not have any intrinsic value or that they are a fad that will go away.  For one, the asset class has proven difficult to classify. Many countries are still at a loss on how to classify them for tax purposes. On their part, investors are not sure how to treat them in regard to taxation or even for everyday use.

In actuality, cryptocurrencies only become bigger, and their very own infrastructure, e.g., worldwide distribution, sets them up for the long haul. And just like any other currencies, cryptocurrencies can be used as a medium of exchange, and they also possess the value that is attributed to them by users.

16. Cryptocurrencies Are Not Secure

As cryptocurrencies have become more popular, they have become targets of scammers, hackers, and thieves. The majority of insecurity incidents happened at cryptocurrency exchanges, while in other cases, malicious actors exploited vulnerabilities in wallets and other aspects. For these reasons, potential investors might worry about investing in this type of asset.

But they should also know that yes, cryptocurrencies are possible targets for theft and fraud, but they can also safeguard their crypto holdings by exercising caution. Some cautious behavior includes storing large amounts of crypto holdings in cold wallets, not accessing their online wallets via public Wi-Fi, enabling two-factor authentication, and always storing their crypto funds in safe exchanges.

17. Cryptocurrencies Are a Scam

There is the notion in some quarters that cryptocurrencies are a scam. Of course, some greedy elements have set out to take advantage of people’s interest in cryptocurrency by offering fake ICOs, creating Ponzi schemes, creating fake exchanges and wallets, and so on.

Very much like how fraud exists in the traditional finance landscape, it also does in the digital currency world. Wise investors, however, do not rush in to every investment opportunity blindly. Instead, they take their time to research every potential investment opportunity, carry out due diligence on any crypto exchange or wallet, and so on.