The Japanese candlestick is the most broadly used technical tool by traders across the globe. Japanese candlesticks were developed in the early 15th century by the Japanese government of the time. They were employed to register price changes in Japan’s rice exchange. At this time, rice was not only the main dietary staple but also a unit of exchange.
Candlesticks are used in trading most of the asset classes. However, they are a particular favorite in the Forex community. 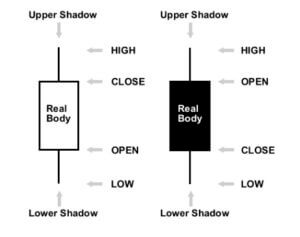 In example ‘A’, we can see two candlesticks, they consist of 4 price inputs, open, low, high and close and which are defined by a real body which displays the open and close, and a lower shadow and an upper shadow which show the overall high and low of that particular timezone.
The left-hand candlestick, with the white body, denotes an ascending candlestick. The candlestick has opened, and at some point moved to the low, it has then moved higher, above the open value of the exchange rate and thus creating the solid body. The candlestick then moves to the high, before falling back to the close, and where it has left a shadow, or wick on the top.

The second candlestick is a descending one. It usually opens at the point where the previous candlestick closes. This time the real body is black. At some point, the candlestick has moved higher, before falling back below the opening value of the exchange rate, and thus now leaving a solid body, before eventually moving to the low point and subsequently moving higher to the close, and thereby leaving a lower shadow, or wick at the bottom. Candlesticks can be color coded to suit. But this is the basic of candlestick trading traders look for patterns when studying technical analysis, and these offer short-term signals that identify relationships between supply and demand. They also help traders to identify areas of support and resistance, which are also called floors and ceilings, and these are areas where price action tends to find it difficult to breakthrough.

Example ‘B’ shows two completely different candlesticks. Each of them provides a trader with information about activity within that particular time frame. The black candlestick on the left is a bullish candlestick, where the open and close are far away from each other and where the close is near the top of the overall movement during that time frame. This tells traders that this was a bullish move, where a considerable amount of liquidity has pushed the exchange rate higher and that the subsequent move may well continue to the upside.
The white candlestick on the right, however, shows a long shadow at the top and a long shadow at the bottom, with a small body and where the opening price is close to the closing price. This candlestick is known as a spinning top and tells traders that there is a lot of indecision during this time frame. Neither buyers nor sellers were particularly in control during this time frame. Therefore traders will be cautious because this candlestick also represents a consolidation of price action and where no real trend has been defined.

Example C, shows a bearish trend, and where the last candlestick, which is known as Takuri line set up and is very similar to the hammer, has pushed all the way down to a critical support area before buyers have come in and bought it all the way back to its closing level. Therefore it has left a long shadow, which is bigger than the body. Traders will see this as a potential trend reversal and take the necessary steps to close all or part of their bearish trend and wait to see what happens in the subsequent time frame.

In the example ‘D,’ we have a bullish trend, where are the three ascending candlesticks are fairly large in size with relatively small shadows, followed by a candlestick with a long shadow either side of a small body, and which is known as a spinning top.
Although the closing price is above the opening, and therefore an ascending candlestick, because the body is small, it tells traders that there is indecision at this point and that therefore, there could be a reversal in price action.
The next candlestick is a bearish candlestick, which confirms that the previous upward trend could be over, and this is followed by a bearish engulfing candlestick which gets its name because it involves at least the first two candlesticks in the upward trend. The A, B, C, positioning of a bullish candle, followed by a spinning top and then a bearish candle, is known as an Evening Star formation.