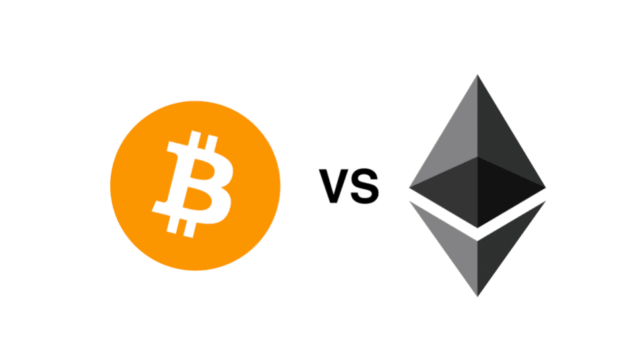 Or at least Ethereum has. Bitcoin didn’t need to carve out a place; it birthed the whole movement, and that’s why all other cryptocurrencies belong to the same umbrella of ‘altcoins’ while Bitcoin is just that – Bitcoin.

Being the most visible cryptocurrencies, comparisons between them are inevitable. Some in the crypto community maintain that Bitcoin is and will always be better than the rest of them. Others believe Ethereum provides a better proposition and is more relevant for the times.

And while Bitcoin started the whole cryptocurrency trend, Ethereum is the crypto that came and showed everyone that blockchain, the technology powering cryptocurrencies, could be used for more.

So, what’s so special about both cryptocurrencies, and why are they pitted against each other?

Let’s start with the basics:

Ethereum – Most successful coin after Bitcoin

One of the most glaring differences between Bitcoin and Ethereum is the purpose for which each was created. Let’s get a quick rundown of that:

Bitcoin came into existence after the 2008 financial crisis, a time when people’s faith in the traditional finance system was at an all-time low. Satoshi Nakamoto created Bitcoin using cryptography to provide top-notch security for the currency.

His goal was a globally decentralized financial system where people had full autonomy over their finances. While the currency is not scalable enough at this time to rival the traditional system, it is a digital store of value for millions of people across the world.

Ethereum, for its part, is not just a store of value or a means of payment. Its creator, Vitalik Buterin, believed that blockchain could be used for more. He created a blockchain on which developers could create decentralized applications, and people could create smart contracts.

Smart contracts are contracts running on the blockchain and which contain a set of agreements that will be automatically executed once every party meets their end of the bargain.

The parties to the contract are not answerable to any third party, and the process does not need intermediaries such as lawyers, guarantors and so on

each step of the process can only be initiated after the conclusion of the immediate former step.

Bitcoin and Ethereum – Proof of Work

PoW is a consensus mechanism for verifying transactions in which miners rush to solve cryptographic puzzles, and the miner who solves the puzzle first gets to add the new block (of transactions) to the blockchain and is rewarded with block rewards and a fraction of transaction fees.

Because of the difficulty involved in solving the puzzles, PoW uses a lot of energy. However, it also distributes mining power among network participants such that it’s hard for one participant to take control of the network.

Apart from consuming a lot of energy, the PoW model presents with several other flaws:

Ethereum in the future -Proof of Stake

Ethereum is currently using the PoW model but is looking to transition into the PoS model in the future. The proof-of-stake model uses a virtual verification model, and miners are replaced with validators.

Since the PoS model is virtual, it doesn’t consume as much power resources as PoW. Once Ethereum implements the protocol, it will be easier to scale and possibly enable it to compete with legacy systems.

Bitcoin introduced a completely new way of looking at money. Through a decentralized, peer-to-peer, and highly secure platform, users can interact with and have control over their finances in ways the world hasn’t seen before.

Ethereum took the idea of blockchain and ran with it, providing solutions such as decentralized applications that are under no one’s control and which give all the power to the users. People can also now enter agreements with each other without the expenses of third-party intermediaries and in a trustless and secure environment.

Both Ethereum and Bitcoin are very different projects but extremely important and valuable for not just the crypto space but also finance and tech. Also, with either project, investors can be certain they’re putting their money in a worthwhile investment.