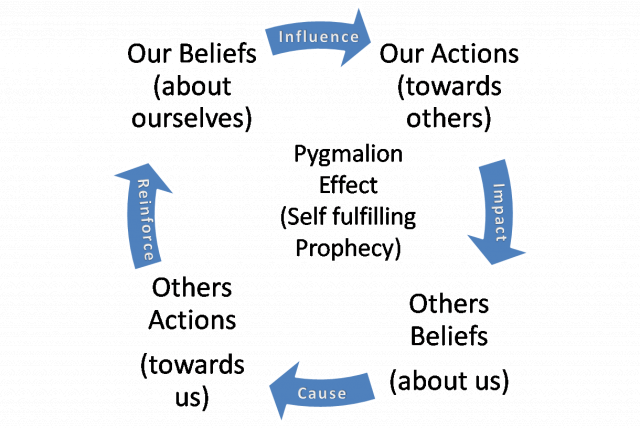 The Pygmalion Effect (or Rosenthal Effect), named after the legendary namesake king of Cyprus and renowned sculptor who fell in love with a female statue of his creation to which he named Galatea, is the process by which a group’s beliefs and expectations of someone affect their behavior to such an extent that it triggers the confirmation of those expectations.

While some psychologists had already documented this behavior in the early 20th century, It was not until the late 1960s that Robert Rosenthal conducted an experiment in which he encouraged the teachers of a school to believe that a certain pupil would get better grades than the rest, which eventually happened. That is, the teacher acted by converting his perceptions about each student into an individualized didactic that led him to confirm these perceptions in a constructive way. In short, it showed that reality can be influenced by the expectations of others, creating self-fulfilling prophecies.

Although we do not realize it unconsciously, this type of behavior allows us to create and maintain social groups. Thus, cultural tradition assigns norms of behaviour to which its members are expected to conform; such norms, usually implicit, impose codes of conduct that are not easy to avoid. What begins as an imitation by children of what their parents do becomes their own way of being. This means that people take on a role from others, and end up believing their own. It can be said then, that we are what others expect us to be.

Well, what does all this have to do with trading? As Domibond007 points out on the Forum, the well-known topic that 95% of traders lose all their money at the end of their first year is actually a fairy tale! According to this user, four are the fundamental reasons that lead to failure in the trading business, with which I completely agree:

In short, the fear of success is greater than the fear of failure… total, we are all educated to be employees, not to reason. 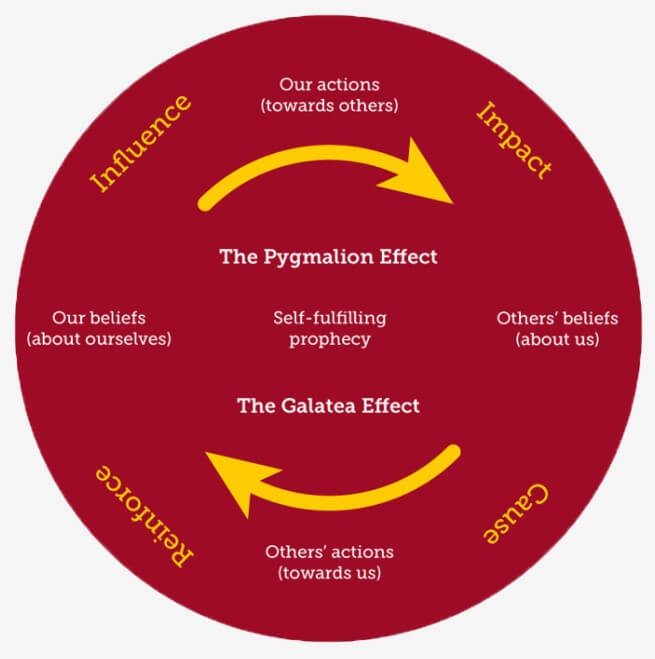 Now that we know what the Pigmalion effect is and how it can affect our trading, what can we do to neutralize it? How can we deprogram ourselves so we’re not losers? Very simple, we will take advantage of the opposite effect, the so-called Galatea effect (coined by Albert Bandura in the 1950s).

Evidently, the Pygmalion Effect and the Galatea Effect interact permanently. If a person expects to fail in trading and everyone tells him he is not worth it, he will surely lose all his money quickly. On the contrary, it can happen that a person does not believe in himself as a trader, and yet the support from his environment to his activity as a trader allows him to achieve profits by trading.

Measures to Neutralise the Pygmalion Effect

Clarify and communicate your own expectations. Ask friends and family to help you recognize their expectations of your own performance as a trader. Discuss the differences that exist between your expectations and those of your environment, in order to reach goals and strategies that both can realize feeling good, but that at the same time is challenging.

Recognize and clarify that expectations can be modified, according to subsequent performance. Ask friends and family to encourage you to take risks according to your abilities; to remind you that you do. is able to achieve success in trading, when it begins to show doubts; and to be recognized for the achievements made and to feel important for it. Similarly, ask those closest to you to help prevent failures that can be avoided.

Finally, remind the people around you that a person hurt in their self-esteem not only decreases their effectiveness but can even lead to the denial of our personal concept, accepting what others manifest.

Measures to Activate the Galatea Effect

Recognize that you are imperfect in trading but at the same time recognize its positive characteristics, based on concrete facts and data. Emphasize your strengths as a trader. Take an inventory of the achievements and goals you have achieved throughout your life. Define what are your characteristics as a trader that you want to develop and improve, as well as the habits that you want to change. Do not hesitate.

Develop and maintain a self-development plan to continuously improve your behavior and trading achievements. Remember that your goals must be both realistic and challenging. Imagine achieving the proposed goals, live them. Think about the consequences that the achievement of your goals could bring. Take risks, tackle new experiences as opportunities to learn more than opportunities to win or lose.

Self-evaluate, learn to evaluate yourself autonomously, doing so will help you avoid the feeling of confusion that results from being aware of the opinions of others. Focus on how you feel respect for your own conduct in trading.