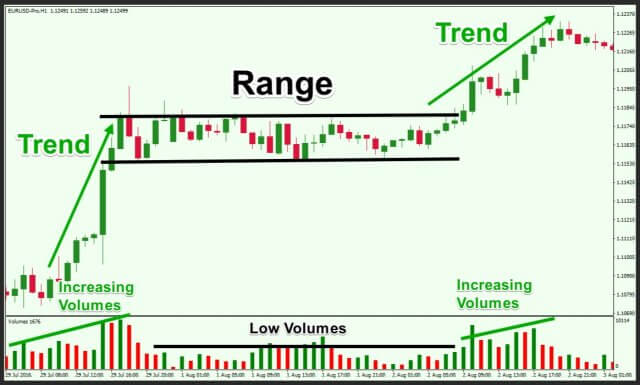 A ranging market is basically when the markets are going sideways, there are little movements up and down but it stays between a high and low price range, the unfortunate thing is that it is very easy to make mistakes during this type of market and a lot of traders do a lot damage to their accounts when the markets are in this sort of situation. This is far more preventable in traders who have learned to trade during a trend, either a bull or bear trend when the markets continue in an upwards or downwards direction.

Having said that it is a dangerous time to trade, there are certainly ways to trade within it, and it is still possible to make a profit within these ranging markets. In fact, some people are able to profit more from a ranging market than they can from a trending one, so we are going to e looking at different ways in which people can and do profit from a ranging market, trading in this sort of environment can be quite exciting, so let’s take a look at the ways that you can do it.

When you are thinking of trading in a ranging market. The first thing that you should be considering are the support and resistance levels that the market is currently adhering to, you may not actually be trading these levels but knowing where they are will give you a good idea of the current market conditions and how it is performing, it will also show you the potential levels that the markets could reach if the current ranging of the markets were to break.

There are of course a few different types of ranging markets, these include a perfect range which is when the range reaches the support and resistance levels a number of times, the price will be going up and down in a very predictable pattern, when drawing out the support and resistance levels it should create a very clear rectangle. The next type of range is a ranging market with a pattern, this kind of range often appears to have some kind of direction, there may be a number of lower highs and lower lows which could be suggesting that an onward trend is forming, or the opposite for an upward trend emerging. The thirst type of the ranging market is a range without a pattern, this sort of ranging market is a little less predictable with the prices going up and down with no clear pattern or reason.

By being able to identify the type of ranging market that is occurring will allow you to make a much more informed decision when it comes to the sort of trades that you are going to put on. It would be far better and easier to make predictions in a market where there are patterns forming than it would in a completely random one. When ranging with a pattern can also indicate that the markets are going to potentially move into a trend and can give you an idea of the possible direction of that trend, you will want to avoid trading in choppy markets or a ranging market without a trend as this can be a much more dangerous market to be active in. A ranging market can also occur in the middle of a trend, so it is important that you manage to identify the overall trend direction too.

So let’s assume that you are going to be trading in these ranging markets, one of the most simple trading methods is simply to trade the support and resistance levels. So we have marked out our support and resistance levels, we then wait for the price to hit either the support or resistance level, when it hits the resistance level when we want to sell and when it hits the support level we want to buy. Some people suggest that you should only buy or sell once the levels have been breached rather than just hit, trading this method is very simple and is a safer option as there are fewer things that can go wrong. It is important to remember to put on your stop losses a little below or above the levels in order to help protect your account from a potential breakout.

You can also trade with channel patterns, these are somewhat similar to trading with support and resistance levels in the way that it is a similar type of trading, we will just be setting our levels a little differently. Channel patterns are something that are offered and available on most charting software tools and packages, you can use them to make the highs and the lows of the markets. You will then work the same way, selling on the highs and buying on the lows, these sorts of patterns can also be used with a trending market and not just a ranging one.

False Breakouts, otherwise known as fakeouts, are another way of trading these ranging markets. The way that these are normally observed is by a pin bar candlestick that sticks out of the support or resistance levels. It is known as a false breakout due to the fact that instead of then breaking out the market will then continue back into its range. For those that trade breakouts this is a form of trap that can get them stung but for ranging markets they are pretty nice as they can present you with a great opportunity for a buy or a sell.

Bollinger bands are often used to try and work out just how volatile the market share is, the top band will tell you how high the price has reached which the lower band will tell you how low it has been. If the bands are too close together then again this will indicate that the markets are choppy and so it may not be worth trading in this condition. If the bands are quite far apart this can also mean that you should not trade, due to the markets being a little too volatile. You can probably work out how to trade these bands, when the price reaches the lowest band you should buy and sell when it reaches the higher one. It is often a good idea to use Bollinger Bands in a pairing with another indicator such as support and resistance levels.

So those are some of the available trading patterns and systems that you can use in order to trade during ranging markets, it should be pointed out that this is not for everyone. If the markets that you are currently trading in are suddenly ranging, then try looking into new markets, just don’t go crazy and start trading exotic pairs that you have absolutely no idea about, they could be a little more volatile than what you are used to.

Of course, if you are a trend trader or a longer-term trader then it may be the best idea to simply not trade at all, the risk to reward ratio in this sort of trading is often a lot lower than you may be used to, you will be risking more for less, so if this is not the sort of trading you are used to or interested in then the best things for you to do may be to simply not trade at all. There is of course no harm in taking a little break from trading when there is nothing available for you to trade, do not try to force it in order to simply have something to do.

So to sum things up, when thinking about trading in a ranging market you should be looking for the support and resistance levels, you should be looking for patterns and you should be considering how volatile the markets are at the time of your trading. If things fall into place and you want to try it, start small and then build your trading up. It is a difficult time to trade but if you manage to get good at it, it will be another weapon in our trading arsenal and will allow you to trade and be profitable no matter what the trading conditions are like.