The second part of the Elliot waves guide will talk about the use of Heikin Ashi candles, wave degrees as well as how to trade the Elliot wave in general.

If you seem to get confusing results from the chart, it’s most likely a miscalculation as far as following the rules of the Elliot wave go. 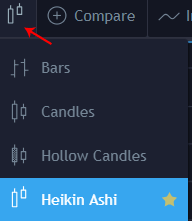 However, there is a way to track and read the chart better.

Heikin Ashi candles pair up extremely well with the Elliot wave pattern reading as they help recognize red or green candles that create a trend. This makes you respond to the market movement and distinguish trends easier.

Each wave of the five Wave Elliott Principle consists of one larger timeframe wave. Each wave can consist of larger market cycles that even take decades to complete. 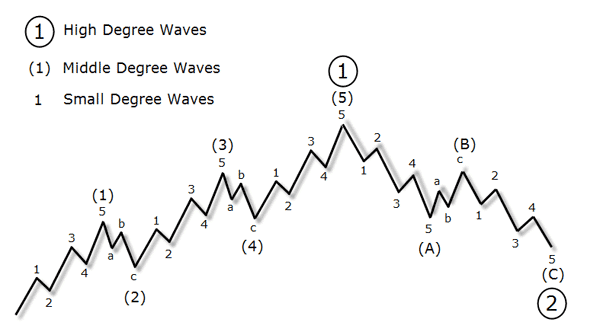 Grand Supercycle: takes multiple centuries
When it comes to cryptocurrencies, and knowing that it is a young market, large wave degrees do not exist yet. However, we have seen a pattern as big as Primary during the rise and fall of Bitcoin’s price in 2017 and 2018.
Trading the Elliot wave

The best entry point would ideally be the start of the first wave. However, that is quite unrealistic as it can be hard to spot and recognize a wave so early. Most traders start at the bottom of the second or the start of the fourth wave. These waves are much easier to spot. As a word of caution, try not to ever buy near the top of the third wave or fifth wave.
The best exit point would be the end of the third corrective wave. However, timing this can be quite hard as these final waves might retrace to 100% of the initial pattern. For this reason, most traders choose a safer exit position, which is the place where consolidation breaks outside of the final corrective wave.

The Elliott Wave Principle is a highly useful chart pattern that is used by many veteran traders. It is mostly used to recognize the beginning and end of a certain trend.
Do your own research before attempting to buy and sell anything. Happy trading.