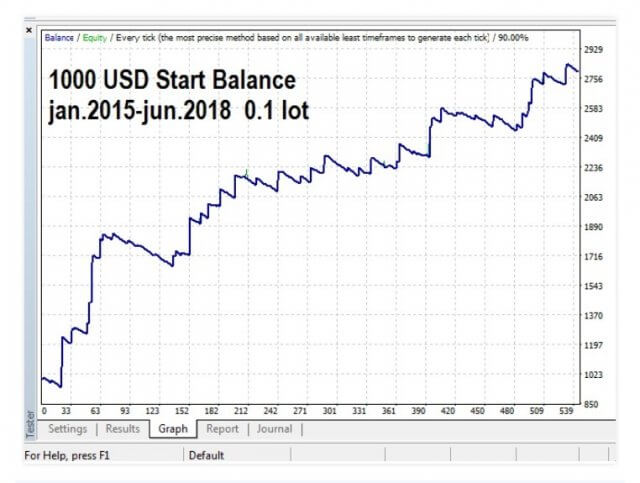 Based on the information and the settings for this EA we have determined it is using a channel breakout strategy for trade entries with several modifications and indicator combos for Risk Management and exits. HitAndRun is developed by Catalin Zachiu from Romania who has at least 26 other products, a couple of them having notable popularity and high ratings. The initial version of HitAndRun was published on the MQL5 market for the MetaTrader 4 platform on 10th February 2019. Updates are frequent with many new functionalities, the latest version 3.6 is from 31st of March 2020. The author’s dedication is notable as it is also evident in the comments page with the users. This EA is in the paid category but also has a free version linked.

HitAndRun defines Tops and Bottoms at which Buy Stop and Sell Stop pending orders are placed. How these levels are determined is not known, it could be the ZigZag or a channel type indicator. Once the level is breached, it is considered as a breakout and the EA will monitor for the exit and set a few Risk Management conditions. Trades have a candle period limit to which any given position can be held or closed if the exit indicator has a signal. Take Profit is also implemented with various customizable options. These options include Breakeven and Trailing Stop variants.

As the EA was updated with new functionalities, It also has a recovery module that is triggered after a losing trade. Recovery mode uses the MACD indicator, Price Action and the price jumps as the momentum signal. Interestingly, some Martingale elements are present. Recovery will also use increasing lot sizes for the trades after a loss. Therefore, Consecutive losses can be a big factor in the final result. Recommended currency pairs are EUR/USD, USD/JPY, and GPB/USD on the H1 timeframe. Note that the USD is present on every pair and could overexpose trading on a single currency.

The setting options are extended so traders will have a lot of freedom to set and test. Almost all aspects are customizable except for the main indicators and formulas. HitAndRun has Auto lot management as well as a fixed lot. Risk management is defined by a simple account Equity percentage. Hard and Virtual Stop Loss methods are customizable with the addition of Trail Step and Trailing Stop in points.

Other notable Risk Management settings are about Breakeven clauses such as BreakEven after points, lock in profits (move Stop Loss to the entry price level) and Start Trailing after defined points range. If you want to further customize the EA in other aspects you can do so by using the spread filter option, working time, use MACD for exits, set the period for the High/Low calculation, and other clauses. Certainly, this EA has a lot of integrations and settings options relative to the price.

The Overview page contains the video and backtesting screenshots that do not disclose much as the versions are different and the EA settings are not the same. Still, some interesting facts in the screenshots are confirmed by users. HitAndRun ahs a very low success rate, just 15.68% are profitable trades according to the screenshot. Depending on the risk allowed, the final result is more or less profitable. The low success rate can be contributed to the shallow Stop Loss trading which results in low maximal drawdown (13%). As expected, there are more consecutive losses than profit trades, but the average profit trade is 10 times larger than the average losing trade, 42.98 vs -4.07. All these shallow Stop Loss management results in a jaggy gain graph with sudden profits followed by even loss slopes.

As for the price, it is just $30 offering 5 activations. A demo is available but you can also use the free version that has some limitations but still functional. There are no rentals available. This price is affordable considering the EA is updated frequently and has a lot of elements and settings. Whatsmore, the shallow Stop Loss management puts it into the low-risk category.

There are 3 reviews published, all with maximum ratings. The latest one is from March 2020 by Andrey Tsygankov:

“Great adviser. One of the few that works with virtual stop orders, for which protection against spread expansion and slippage really works. Recommend.”

Another review confirms that the EA works exactly as in the screenshots. Overall, HitAndRun is a unique breakout strategy EA with elements of scalping, martingale and swing trading. Certainly worth trying out.

This Forex service can be found at the following web address: https://www.mql5.com/en/market/product/35710