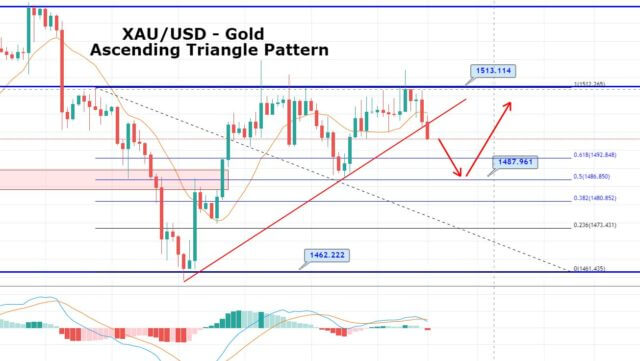 On Thursday, the precious metal gold prices climbed one-week highs, staying mostly over above $1,500 during the European session. But the scenario seems to change now as the U.S. investors seem to do profit takings in the overbought gold.

The market sentiment is being driven by two things lately:

There’s a potential rate cut in the next policy decision by the Federal Reserve.

The Federal Reserve has already delivered two rates back to back rate cuts so far this year, in the wake of protecting the United States economy record decade-long growth.

Following an FOMC meeting minutes and the Fed Chair speech, the market is focusing on the Jerome Powell announcement that the market participants are possibly expecting another rate cut, and this may not be on the cards this year. So basically, it’s a hawkish statement that drives the bearish trend in the gold prices.

On the other hand, the traders want more transparency and certainty in the matter of the United States and China trade war. The market is still careful due to conflicting hints from both sides, as trades discussions continued this week.

Recalling our earlier update on gold, the XAU/USD had formed an ascending triangle pattern, which was keeping gold steady below 1,512 resistance level, and it was also extending support at 1,500 level.

Just an hour ago, the XAU/USD violated the ascending triangle pattern on the lower side. Gold may drop further towards a 38.2% Fibonacci retracement level of 1,492. Whereas the violation of 1,492 could lead to gold prices deeper towards 1,485.