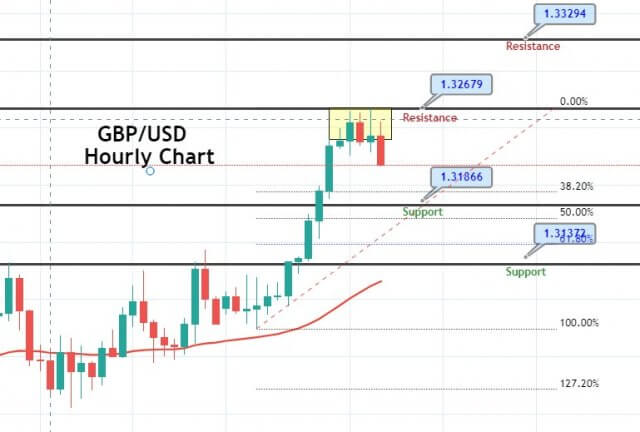 The GBP/USD currency pair remains on the bullish track and taking rounds around above the mid-1.3200 level, mainly due to the hotter-than-expected U.K. consumer inflation figures, which initially underpinned the Pound sterling and contributed to the currency pair gains. On the other hand, the broad-based U.S. dollar fresh weakness, backed by the upbeat market mood, also played its role in gaining positive traction for the currency pair.

Apart from this, the currency pair bullish bias could also be associated with the reports that suggest the improvement over Brexit talks, which eventually underpinned the pound and sent the GBP/USD pair to the highest level since January during the Asian session on the day. On the contrary, the British Chamber of Commerce’s negative comment about the U.K. economic recovery becomes the key factor that ket he lids on any additional gains in the currency pair.

At a particular time, the GBP/USD currency pair is currently trading at 1.3233 and consolidating in the range between 1.3230 – 1.3268. However, the pair’s traders seem cautious to place any strong bids ahead of Wednesday’s release of the FOMC meeting minutes.

At the data front, the headline UK CPI increased 1.0% YoY in July vs. +0.6% expected. In the meantime, the core inflation gauge (excluding volatile food and energy items) exceeded expectations and arrived at +1.8% YoY during the reported month, up from the 1.4% increase in June. However, this positive data initially boosted the sentiment around the sterling.

At the Brexit front, the British diplomats are showing a willingness to compromise on Brexit talks by September without citing any strong pieces of evidence. However, the gains in the currency pair were further bolstered by the improving sentiment on Brexit talks.

The upbeat market sentiment initially got boosted amid the reports that the U.S. Congress is finally reaching a consensus over the latest stimulus measures. Despite this, the uncertainty over the next round of the U.S. fiscal stimulus measures remains on the cards as the agreed figures as Republicans agreed to reach an agreement with Democrats for their proposed only $500 billion packages. These figures are considerably less than the amount that Democrats were expecting. This, in turn, the broad-based U.S. dollar lost its early-day gains.

However, the market trading still flashing green amid optimism over a potential vaccine for the highly infectious coronavirus, which also weighed on the U.S. dollar and contributed to the currency pair gains.

At the USD front, the broad-based U.S. dollar failed to maintain its early-day gains and dropped once again as doubts over the U.S. economic recovery fueled again amid lack of progress over the coronavirus stimulus package. However, the losses in the U.S. dollar helped the currency pair to take bids on the day. Whereas, the U.S. Dollar Index that tracks the greenback against a basket of other currencies was down near 92.263.

On the negative side, the British Chamber of Commerce said in the latest Business Tracker report, that the U.K. firms were facing cashflow problems amid post coronavirus pandemic slow recovery. However, these gloomy updates turned out to be major factors that capped further upside for the currency pair.


The GBP/USD has entered the overbought zone at 1.3268 level. Therefore, we have applied the Fibonacci indicator on the 4-hour timeframe. Closing of candles below 1.3268 level is likely to drive selling trend or bearish correction until 38.2% and 61.8% Fibo level of 1.3189 and 1.3147, respectively.