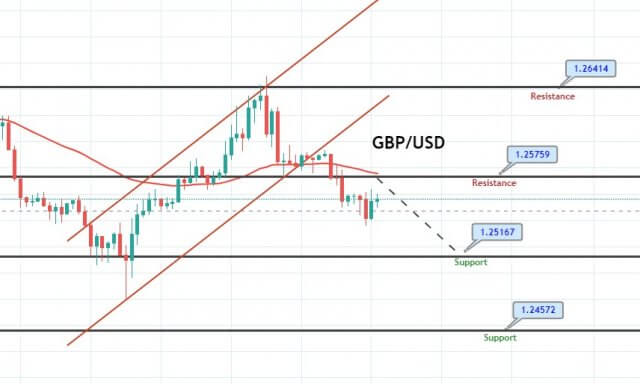 The GBP/USD currency pair extended its early-day losses and took offers below the mid-1.2600 level while represented 0.41% losses on the day mainly due to downbeat trading sentiment underpinning the broad-based U.S. dollar contributed to the currency pair losses.

On the other hand, the better-than-expected U.K. monthly employment detail further extended some support to the British pound and helped the currency pair limit its deeper losses. Whereas, China’s latest warnings to the U.K. over the Huawei ban matter also exerted some downside pressure on the British pound. Currently, the GBP/USD currency pair is currently trading at 1.2536 and consolidating in the range between 1.2527 – 1.2594.

It is worth reporting that the Office for National Statistics (ONS) showed on Thursday that the official U.K. unemployment rate remained unchanged at 3.9% for May compared to 4.2% expected. The claimant count change showed an unexpected decrease last month.

At the data front, The number of people claiming jobless benefits declined by 28.1K in June, against expectations +250K and +528.9K seen previously. The claimant count rate eased to 7.3% vs. 7.8% last.

The latest optimism over a potential vaccine for the highly contagious coronavirus disease was recently overshadowed by China’s latest warnings to the U.S. after the U.S. sanctions on Beijing’s diplomats. In the meantime, the U.S. is also considering imposing a travel ban on Chinese Communist Party members, which is likely to prompt sharp retaliation.

On the positive side, the market traders cheered the optimism concerning the COVID-19 vaccine, which was triggered after the upbeat signals form Moderna. As well as, Dr. Anthony Fauci, the leading expert on infectious diseases in the U.S., also hinted on Wednesday that the country will meet its goal regarding COVID-19 vaccine by year’s end, spurring hopes of an economic recovery. Apart from this, Russia also completed early-stage trials of a COVID-19 vaccine, which provided some support to the risk-tone and helped limit deeper losses.


The GBP/USD was trading in line with our forecast and was near to hit our take profit, but unfortunately, the release of worse than expected U.S. jobless claims triggered bullish bias in the pair. The idea was to stay in a sell position below 1.2575 level as this was support become resistance level for Sterling. Besides, the MACD, RSI, and 50 EMA were also in support of selling. Anyhow, the market has already closed our position at the stop. For now, you should keep an eye on the 1.2600 level to take a selling trade in GBP/USD