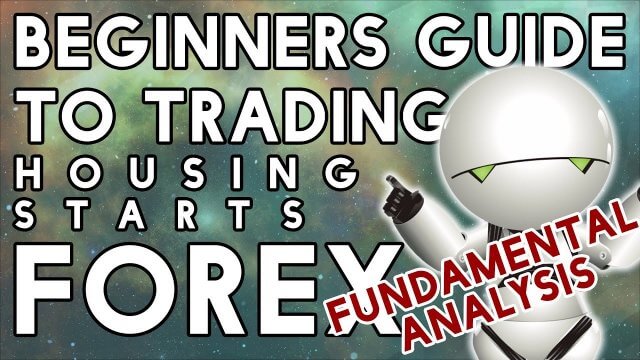 Welcome to the Fundamental analysis video for novices. In this session, we will be looking at housing starts.

So, what are housing starts?

If you are reviewing your Economic Calendar and you come across the term Housing Starts, it refers to this key economic indicator, which is released around the 17th of each month by the US commerce department. The information is subject to an Embargo, and when released, it refers to the number of new residential homes that had begun construction during the month in question. Only housing starts where construction has begun on the foundations of the property are included in the data.

In the United States, housing starts comprise of three sectors of residential homes, which include single-family homes, town homes and condominiums, and multi-family dwellings with more than five units such as apartment blocks.
Analysts and traders compare the monthly data to previous months figures, in order to ascertain if the month or month and annual housing starts are growing in numbers or falling.

So why is Housing Starts so important in fundamental analysis, and why is it considered a key economic indicator?
Housing starts help to give a clear picture of the economic health of a country because when houses are being constructed, it usually means that people are moving home, buying homes or investing in properties such as buy to let or with a long term view to buy, hold, and sell. These types of home buyers are speculators. Sometimes this area of activity is referred to as flipping, especially in the renovation sector.
The important thing is that this activity usually grows in a growing economy and will typically contract during periods of recession.

When the 2008 recession started, and people were unable to pay their mortgages, the knock-on effect was, banks losing money in failed mortgages, which started a knock-on effect and caused the crash. Housing starts can be affected by the weather, and this is generally factored in by economists when the data is released. They will also consider the business sector surrounding this industry, which include banks, mortgage suppliers, mortgage brokers, builders, construction workforce, and suppliers of goods and materials.

How to trade housing starts?
Because of the coronavirus pandemic, which has caused a contraction in the housing market, traders and analysts and economic commentators will be keeping a close eye on Housing, starts data over the next few months. They will use this data to try and ascertain if the crisis is over and that things are gradually getting back to normal with an uptake in house buying.

When the number is released, which usually happens on the closest business day to the 17th of each month, for the US housing starts data, keep a close eye out for the number, if it is as the market expected, we should not see too much volatility in the markets. If the number is much lower than that which is expected this would be bearish and you might see the dollar exchange rate fall in value against his counterparts, and if the number is higher than expected, this should be considered bullish because it is good for the economy and you might, therefore, see dollar exchange rates move higher.