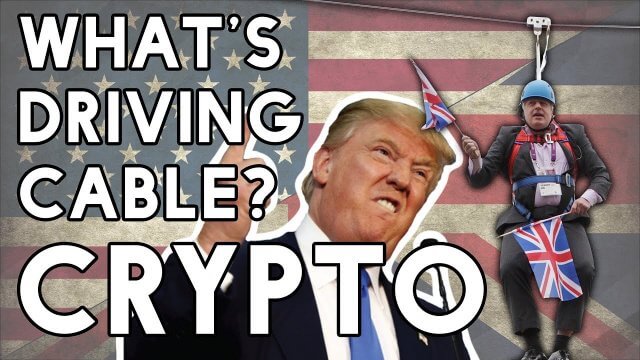 Welcome to the Forex Academy educational video in this session we will be looking at the British pound and discuss what might be driving it within the realms of the pound vs. the United States dollar also known as Cable.

What is driving Cable?

After a bullish rally at the end of June, where price action had consolidated due to end of the month, end of quarter rebalancing, the Great British pound found some buying pressure at the beginning of July and where price action in Cable largely consolidated for a few days due to the fact that Britain and the European Union had completed a recent round of trade negotiations, which had fallen largely flat and all come to nothing.

However, at position A, the European Union chief Negotiator Michael Barnier announced he would be having dinner with the UK’s trade negotiator, David Frost, at Number 10 Downing Street. That evening. No doubt, they would be eating fish and chatting about fisheries, which is one of the biggest stalling points between in the UK and the EU you being able to reach an agreement on a future trading deal.

However, the announcement of the meeting gave a lift to the pound, causing Cable to make fresh highs, just below the key 1.26 level at position B.

The morning after the night before induced some negative tones from Barnier who declared there had been no major developments and cable consolidated and pulled back to position C, which was just before the Chancellor of the Exchequer, Rishi Sunak released an emergency budget. This was largely well-received by the market because it will help people retain their jobs as the UK tries to recover from the COVID pandemic, especially the younger generation of the United Kingdom. Job losses would be limited UK Gov offering a further olive branch in the form of £1,000 payments to companies in order to retain staff after the end of the furlough arrangement.

After a strong move above the 1.26 level sentiment shifted to a downbeat United States dollar which began to reverse some of its bad performance across the board on all the major currencies, mostly driven by better than expected US data releases, and which sent Cable back down to position E. Some of this would have been down to profit-taking. However, we see an uptake in the pair again during Friday’s European session to retest the previous high at around 1.2663 level. A double top always makes the markets nervous.

However, around this time, President Donald Trump came out and said that there would likely be no Phase 2 to deal with China. It simply wasn’t on his mind.  This sent a shockwave through the market where US equities initially were sold off and which saw buying pressure on the United States dollar and a pullback in Cable.

The financial markets and especially the forex markets are extremely volatile at the moment and liable to huge swings caused by a myriad of reasons but mostly centered around the fallout from the Covid pandemic, of course. Tensions are building with China as it flexes its muscles over its new security law regarding Hong Kong and which is causing fall out with most of its trading partners. The UK government is about to make a decision with regards to the Chinese technology firm Huawei and whether or not to implement its 5G technology within the UK communications infrastructure.  Declining the use of Huawei technology may be seen by the Chinese government as a further indication that relationships are souring between the two nations.  Any increased tensions could also cause downward pressure on the Pound Sterling.