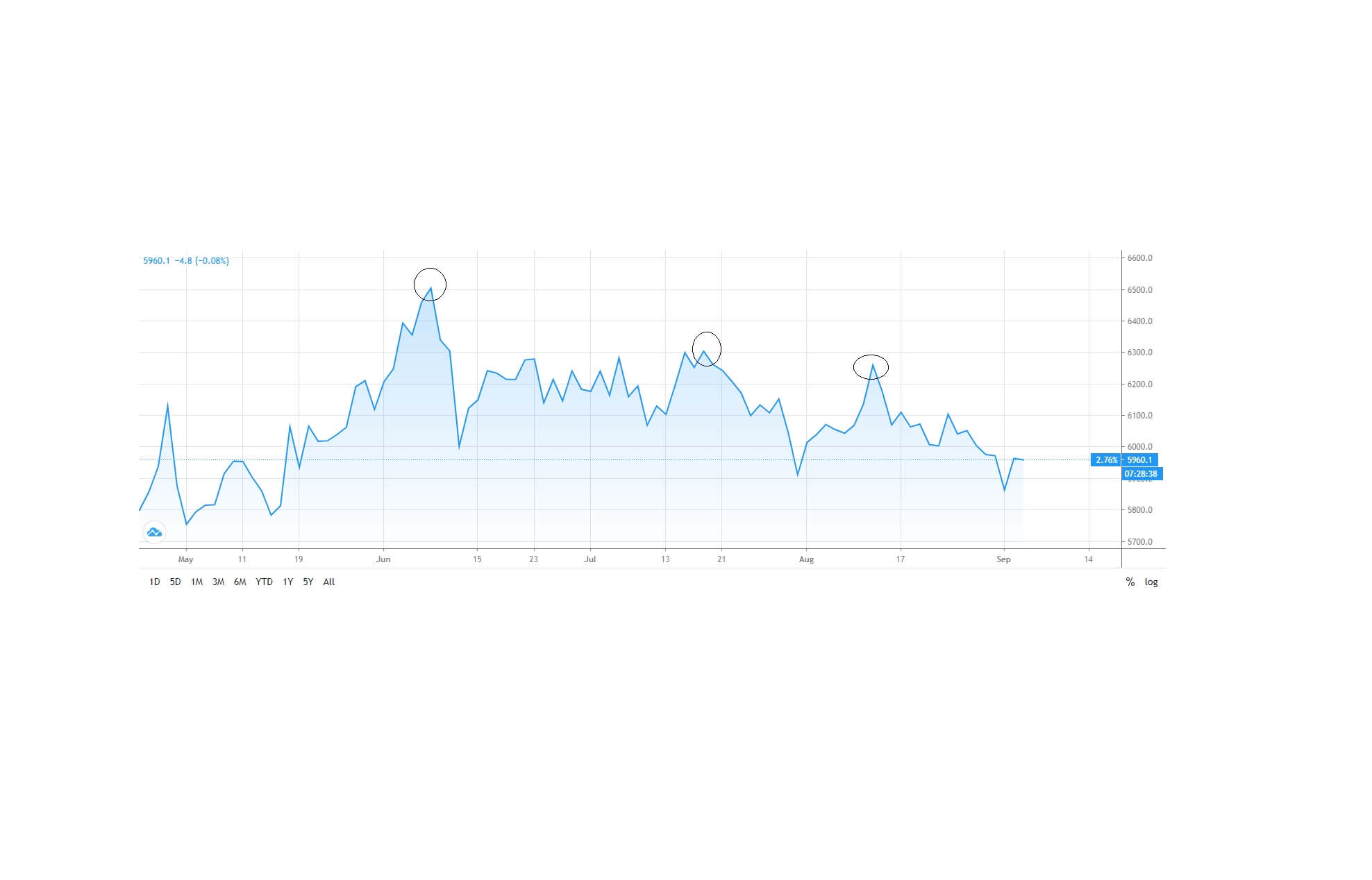 In this session, we will be looking at the Brexit situation and how it is unfolding, and the disparity between the British pound and the FTSE 100 index.
Here is the FTSE 100 index and where we can see 3 peaks that are falling, from a high of 6,500 to the current level, at the time of writing, at 5,960: a gradual trend lower since June 2020 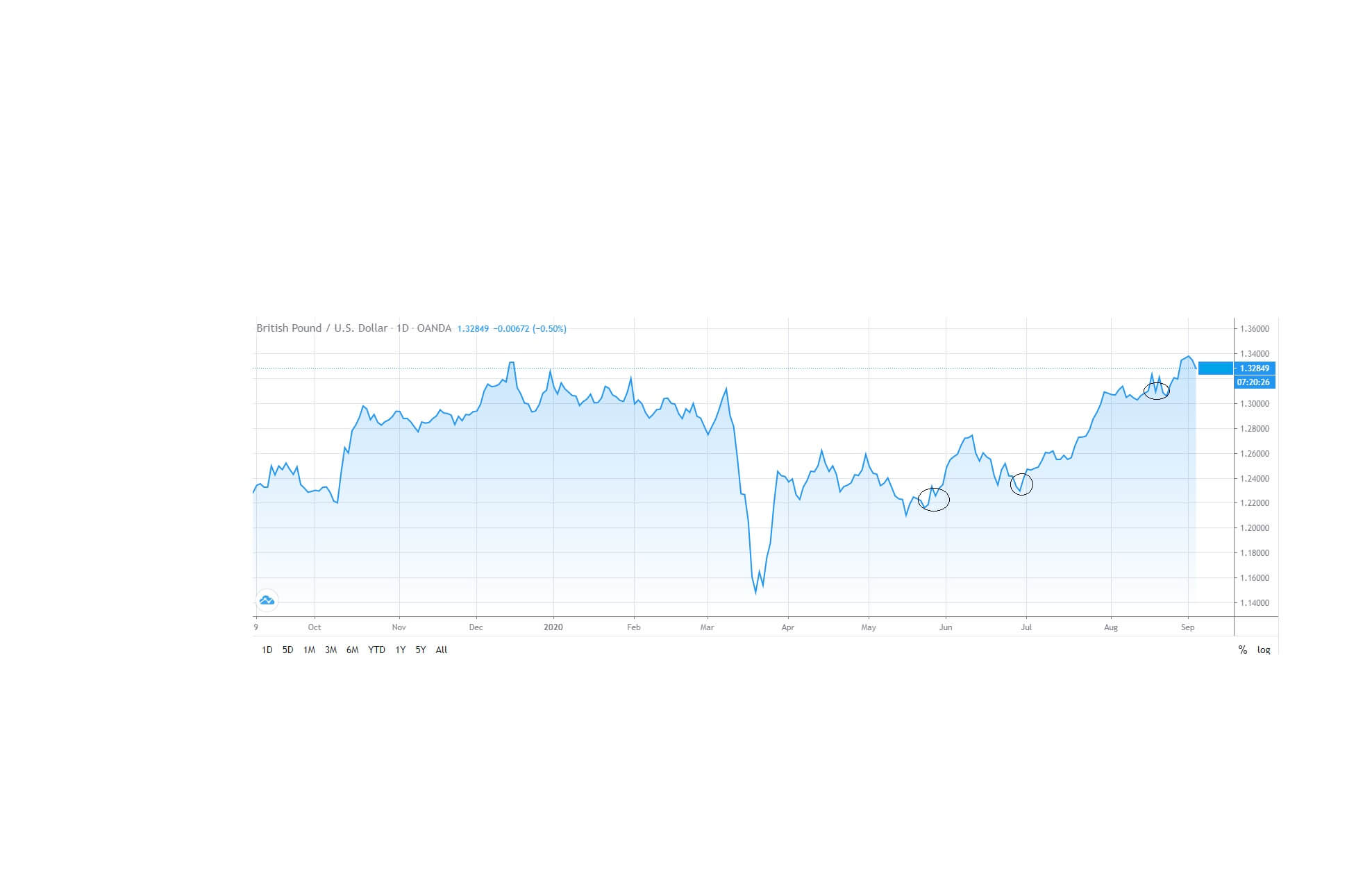 Here is a chart of the British pound against the United States dollar and where we can see during the same time period the pound has been extremely bullish against the dollar from 1.2200 to up to a peak of 1.3400 to its current trading range at 1,3284 at the time of writing.
This tells us a story that the pound is bullish, and this is largely due to US dollar weakness and where traders have been riding the wave upwards, following the trend, in a which has been fairly typical where US dollar weakness has been seen across the board and particularly with the other major currencies. So, we have bad continuing economics from the USA and bad US dollar sentiment.

However, if we revert back to our ftse100 chart, the same sentiments cannot be applied to the British economy, and this is typical because of one reason: fund managers do not act out of sentiment in the same way as currency traders so. Fund managers will typically take a more long-term view, and this, of course, must factor in the Brexit situation. And herein lies our conundrum: one set of traders is buying the pounds, and another set is selling UK equities, and mostly because of the risk of no trade agreement being reached between the European Union and British governments regarding a future trade deal. This has largely been put down to the European Union wanting more leeway regarding fisheries and European fishing vessels being allowed to fish in British waters and also so with regard to standards being maintained across the board between Britain and Europe within the financial services sector and other areas such as food. Both sides have red lines, which neither are prepared to budge from and where there seems to be a breakdown in the negotiations with Michel Barnier and his British government counterpart, David Frost.
Time is of the essence, and it is said that a deal must be reached by the end of October in order for the future trading relationships, including zero tariffs on either side, being implemented. Should an agreement not be reached, Britain will be left to trade outside of Europe on world trading organisation rules, which are not as favourable to Britain as they would be with no tariff arrangement with Europe.

Michel Barnier has made it clear that unless standards are unified across the board, and the UK are willing to move their red lines on fisheries, it could cause trading problems and frictions, even where buy British lorry drivers might not be allowed to pass through Europe.

So, where does this leave things? Pretty much hanging in the air. The strength of the pound belies the uncertainties regarding the future arrangements with the European Union. Both sides are up against it in terms of time, and if neither side will budge, there is a distinct possibility of a no-deal trade arrangement between the two nations.
And so what might we expect? If it comes down to the 11th hour, so to speak, and there is absolutely no trade agreement between Great Britain and the European, the party might be over for the British pound, which could suffer to the downside against counter currencies.
We might also see a further sell-off on the FTSE 100. AS time gets closer, it will be wise for traders to be extremely cautious while trading both of these assets. Incorporate tight stop losses and reduced leverage.