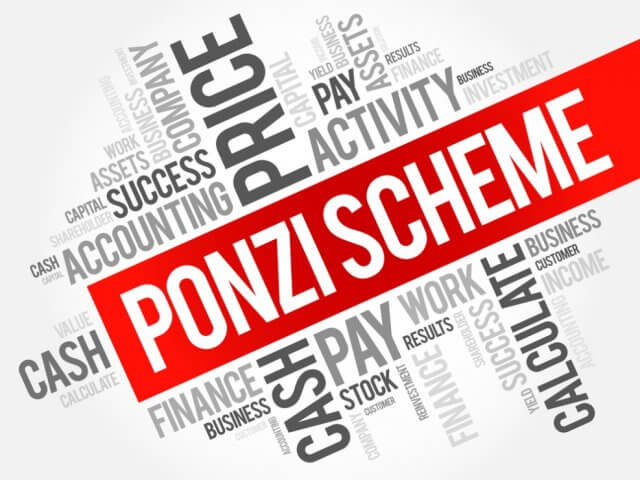 You have probably heard about Ponzi schemes or at least the fact that a lot of people have lost a lot of money to them. To the outside world, they are an opportunity to make a lot of money very quickly, however in reality they are a ticking time bomb that will only make money for the owner and no one else.

A Ponzi scheme is basically a financial service or activity that aims to give you a very high above market return on your investment. In reality, they simply use investments from newer investors to pay the older ones. The percentage being offered is often far beyond anything reasonable with things like 1% to 5% per day being offered. A Ponzi scheme will ultimately fail once the number of investors starts to slow down, at this point, they are no longer able to payout the earlier investors, at this point the owner normally shuts up shop and runs, leaving all those that have invested with the loss.

So how do you tell whether something might be a Poni scheme? There are a number of warning signs that you should look out for, some of them include the following.

Guaranteed High Returns – Anything that is offering you guaranteed returns is a bit of a red flag, what makes it even more obvious is when the returns are far higher than most reputable places such as banks or building societies.

Consistent Returns – If you have already traded, you will know that you do not make exactly 1% per day or week, each day is different as it depends on the markets, so when someone is offering the exact same return every day it can send out a few warning signals.

Not Licensed – The majority of Ponzi schemes will not have any regulations around them and they won’t have been registered with any governing bodies, so if you are thinking of investing somewhere, be sure to take a look to see if they are in fact regulated, you could also call the regulator to double-check as some have been known to put that they are regulated even when they are not.

No Information Of Strategy Or Process – If a scheme is using the Ponzi method of paying their investors, then there may not actually be a strategy or process available. Not knowing how they will be generating their money to pay back investors should be a huge red flag and something that should certainly make you think twice.

So what makes a Ponzi scheme different from a Pyramid scheme? Both are primarily built around the idea of recruiting new people into the system in order to make money, both often have a product attached to it which is pretty much nonexistent or useless to the customer. The main difference between the two is that for a Pyramid scheme, recruitment is done at all levels, while with a Ponzi scheme, it is normally just those at the top that do the recruitment. So there isn’t much difference between them, and they should both be avoided as much as each other.

If you are ever in doubt or you see any of the warning signs, the best advice that you can be given is to stop and find something else, investing into such a scheme will only result in a loss of everything you have put in.