What on earth is going on with the EURUSD pair and how to trade it!

In 2011 the EURUSD was way ahead of other currency pairs being traded in the Forex market and was traded with almost 50% more in volume than that of the USDJPY and GBPUSD combined.
Indeed it was only a couple of years ago that you might expect the daily swing in the EURUSD pair to be well over 100 pips per day. And yet, in recent months, we have seen the daily price action of the pair restricted to around 25-30 pips on many occasions during the European and American trading sessions, when its volumes are at their peak.

Let’s take a quick look at example A which is a 15-minute time frame of the pair, where the two vertical lines indicate where the majority of the volume will have been traded. This time frame is a fairly typical choice for an institutional trader to use. So let’s take a more detailed look at what is going on in example B. 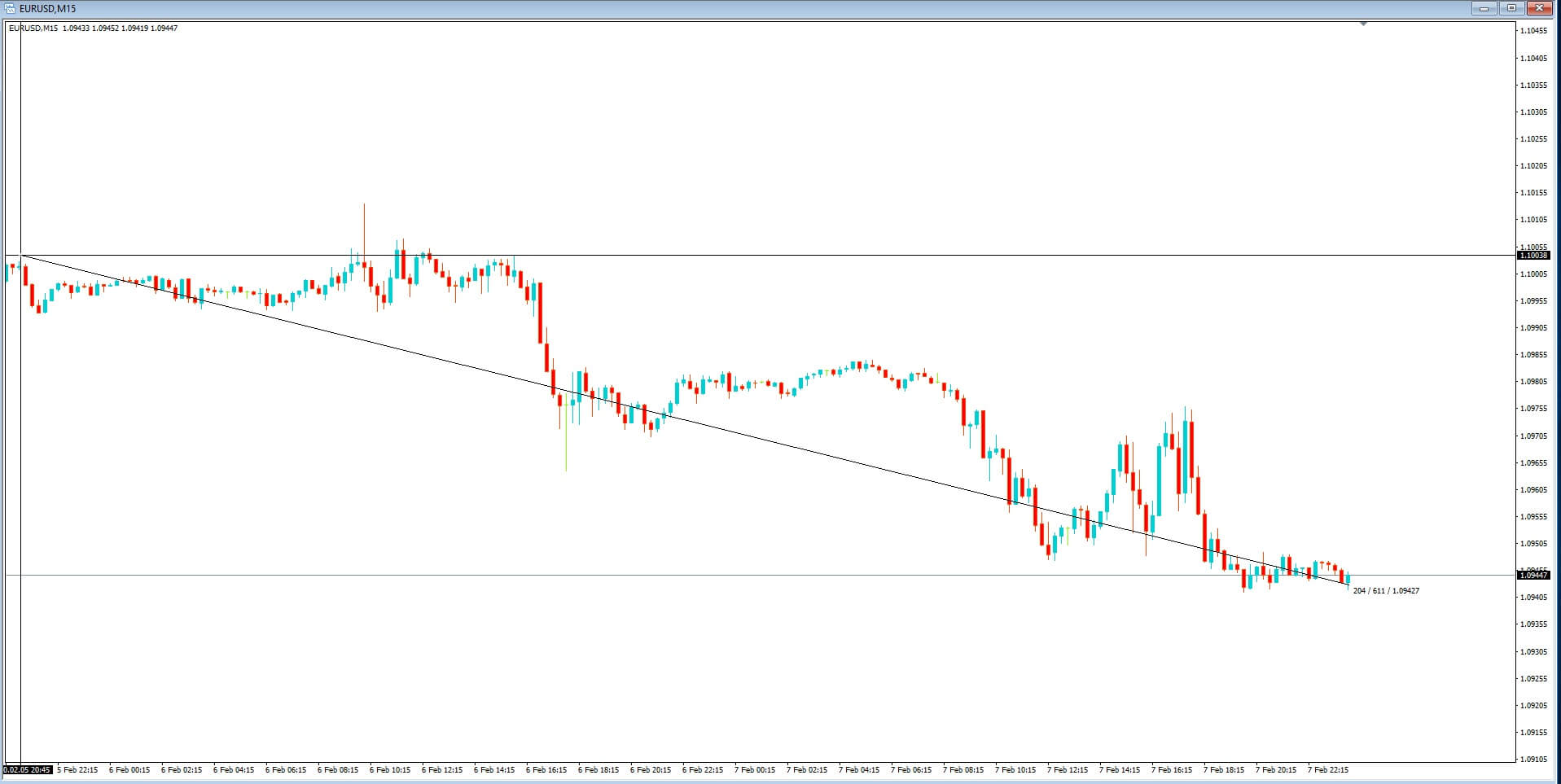 From the 5th of February 2020 through to the 7th, which contains two complete trading days, we can see that the total amount of pips traded is just 61, giving us our average of 30.5 pips per day. In terms of volume, it is almost nothing.

Let’s drill down further, in example C, to try and define what is going on. We have broken the time period down into three sections. Firstly, in section A we can see that where was sidewards trading, which was consolidating and restricted to only 21 pips and where price action was fluctuating very tightly around the key 1.10 exchange level.

Finally, traders threw in the towel with regard to expectations that the key 1.10 level would act as an area of support, and price action then falls lower to area B, again where it consolidates into a restrictive range of only 19 pips.
Again price action moves lower initially in area C, but again we see a fairly restrictive price action of only 33 pips including the most volatile session in the middle of this area which is associated with the release of the US nonfarm payrolls, and where the much better than expected 225,000 jobs were added to the labor force, and where previously one might have expected dollar strength to move this pair 100 pips to the downside with such a number, but it was relatively unaffected.

So what is happening, and how can we trade this pair? First and foremost, it was only a couple of months ago that big institutional players were suggesting that this pair could be heading for the 1.15 level, such is the belief in the strength of the Euro. Obviously, that has not happened, and this is largely due to a weakness in the Euro area and which is particularly affecting growth in the German economy, which some say is in borderline recession, and where the German economy is pretty much the backbone of the European Union.

We also have fallout from Great Britain formally leaving the European Union and where uncertainty will prevail with the European model, due to losing income from the UK and whereby no formal trade agreements have yet been set in place and where the restrictive timeline to implement this leaves many wondering whether it is achievable by the end of December 2020.
The Coronavirus is also keeping worries with regard to a potential contraction in growth and all of this can

only mean one thing the big institutional players are uncertain with regard to directional bias for this pair in the short to medium-term and are pretty much standing on the sidelines waiting for clear evidence of where the Euro is heading.
Therefore, should you be standing on the sidelines as well? This pretty much depends on your flavor for risk. You might be better off looking at other major currencies such as the USDJPY, the GBPUSD, if you want volatility. But if you want to trade the EURUSD pair, we suggest that you use simple add price action boxes such as we have drawn onto our charts and look for breakouts when they occur, or simply drop down to a lower time frame such as the 5-minutes chart in order to scalp the pair to try and make a few pips here and there throughout the day.